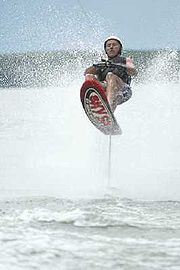 The sit-down hydrofoil
Hydrofoil
A hydrofoil is a foil which operates in water. They are similar in appearance and purpose to airfoils.Hydrofoils can be artificial, such as the rudder or keel on a boat, the diving planes on a submarine, a surfboard fin, or occur naturally, as with fish fins, the flippers of aquatic mammals, the...
is a fairly new water sport. Unlike water skiing
Water skiing
thumb|right|A slalom skier making a turn on a slalom waterski.Waterskiing is a sport where an individual is pulled behind a boat or a cable ski installation on a body of water, skimming the surface.-History:...
and wakeboarding
Wakeboarding
Wakeboarding is a surface water sport which involves riding a wakeboard over the surface of a body of water. It was developed from a combination of water skiing, snow boarding and surfing techniques....
you do not ride on the water, instead your body and the board rise above the water, supported by the hydrofoil wing which is still under the water. This is done by being towed by a towboat
Towboat
Not to be confused with the historic boat type with the same name, also called horse-drawn boat.A towboat is a boat designed for pushing barges or car floats. Towboats are characterized by a square bow with steel knees for pushing and powerful engines...
with a driver and spotter. The skier sits on the seat of the hydrofoil and is strapped in with a seatbelt; their feet are strapped into bindings on the front of the board. These precautions are to prevent the skier and board from separating while being towed. When the skier is strapped in and ready to ride the boat will start to pull the skier. This will cause the hydrofoil to lift the rider and board above the surface of the water. This is the point where balance becomes crucial. The rider must be centered over the post of the hydrofoil; small body movements will cause great reactions with the hydrofoil. Once general balance and control of the board has been achieved, the
possibilities of the sport are endless. Because the board is above the water surface and generally not contacting it, the ride is largely unaffected by the wake or chop of the water. The ride is relatively smooth, as if floating on air. The air board is a modified hydrofoil where the skier stands up. Manufacturers of sit-down hydrofoils include Air Chair and Sky Ski.

The sit-down hydrofoil as we know it today was invented by Mike Murphy and Bob Wooley.

Hydrofoils date back the early 1900s, however they were not part of a recreational sport. The first hydrofoil was created in 1906 by an Italian inventor Enrico Forlanini
Enrico Forlanini
Enrico Forlanini was an Italian engineer, inventor and aeronautical pioneer, well known for his works on helicopters, aircraft, hydrofoils and dirigibles. He was born in Milan...
(1848-1930). Throughout the 1900s many different version of the hydrofoil boat were created. This includes many military units around the world by the 1960s. In the early 1960s an aeronautical engineer from Massachusetts Walter Woodward was the first person to create a water ski Hydrofoil. The water skis were then tested by Frazer Sinclair.
This event marked a new day in the future of water sports. Bob Woolley then applied the concept of the “Sit Ski” and developed a hydrofoil with a seat and two skis. It used the double strut design with skis that were stationary versus the articulated Skis on the “Sit Ski”. The first sit down hydrofoil was ridden in 1984 by Bob and was the major turning point for the modern day hydrofoils. After getting blasted with water from the center of the skis, Mike came up with the idea to have Bob move the skis together so that the wash from the spray would be off to the sides of the ski. In addition, they changed the hydrofoil from a double strut to a single strut. This design eventually became a single ski with a single strut.

Mike and Bob were hydrofoiling on the river, Bob with his new seated hydrofoil and Mike with his stand-up two ski hydrofoil. When Mike would fall on either the stand-up and seated hydrofoils he would get hit by the foil and he decided that he would not ride a hydrofoil until they added a seat belt to it. At about this time Mike Mack was developing the "Mackstrap", a heel strap used on a hot dog slalom ski that did not make it to the market. This strap was used on the hydrofoil prototype to help keep the rider’s feet from coming out. These two additions were the final necessary steps in making the sit-down hydrofoil safe for riders.


Parts of the Hydrofoil

In order to "float" upward the skier must lean back while maintaining balance so he doesn't pitch forward unexpectedly. To go back down simply lean forward or push down with your feet. In order to turn to you left and right simply point your knees in the direction you want to go and the hydrofoil will follow.

Submerged hazards such as trees can be struck by the hydrofoil as low as 3 feet below the surface of the water. This can make the rider fall without warning. Also, if the tow rope were to somehow get tangled around the skier or equipment, that could create a hazardous condition. After a fall, the skier remains strapped to the board and it uprights itself naturally after only a couple of seconds. It is important to keep in mind that all water sports are dangerous and have inherent risks. There is always the possibility of drowning so it is important to be a good swimmer even with the use of a personal flotation device. Crashing can also cause injury by impact with the water or contact with the hydrofoil.