Encyclopedia
Lake Pepin is a naturally occurring lake
Lake
A lake is a body of relatively still fresh or salt water of considerable size, localized in a basin, that is surrounded by land. Lakes are inland and not part of the ocean and therefore are distinct from lagoons, and are larger and deeper than ponds. Lakes can be contrasted with rivers or streams,...
, and the widest naturally occurring part of the Mississippi River
Mississippi River
The Mississippi River is the largest river system in North America. Flowing entirely in the United States, this river rises in western Minnesota and meanders slowly southwards for to the Mississippi River Delta at the Gulf of Mexico. With its many tributaries, the Mississippi's watershed drains...
, located approximately 60 miles downstream from Saint Paul, Minnesota
Saint Paul, Minnesota
Saint Paul is the capital and second-most populous city of the U.S. state of Minnesota. The city lies mostly on the east bank of the Mississippi River in the area surrounding its point of confluence with the Minnesota River, and adjoins Minneapolis, the state's largest city...
. It is a widening of the river on the border between Minnesota
Minnesota
Minnesota is a U.S. state located in the Midwestern United States. The twelfth largest state of the U.S., it is the twenty-first most populous, with 5.3 million residents. Minnesota was carved out of the eastern half of the Minnesota Territory and admitted to the Union as the thirty-second state...
and Wisconsin
Wisconsin
Wisconsin is a U.S. state located in the north-central United States and is part of the Midwest. It is bordered by Minnesota to the west, Iowa to the southwest, Illinois to the south, Lake Michigan to the east, Michigan to the northeast, and Lake Superior to the north. Wisconsin's capital is...
. The formation of the lake was caused by the backup of water behind the sedimentary deposits of the Chippewa River's
Chippewa River (Wisconsin)
The Chippewa River in Wisconsin flows approximately 183 miles through west-central and northwestern Wisconsin. It was once navigable for approximately 50 miles of its length, from the Mississippi River, by Durand, northeast to Eau Claire. Its catchment defines a portion of the northern boundary...
delta
River delta
A delta is a landform that is formed at the mouth of a river where that river flows into an ocean, sea, estuary, lake, reservoir, flat arid area, or another river. Deltas are formed from the deposition of the sediment carried by the river as the flow leaves the mouth of the river...
. It has a surface area of about 40 square miles (103.6 km²) and an average depth of 18 feet (5.5 m), which makes it the largest Lake on the entire Mississippi River. 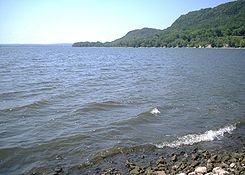 There are three marina
Marina
A marina is a dock or basin with moorings and supplies for yachts and small boats.A marina differs from a port in that a marina does not handle large passenger ships or cargo from freighters....
s on the lake: the Lake City Marina, and Hansen's Harbor, both in Lake City, and Dan's Pepin Marina in Pepin, Wisconsin. There is also a private dock for the customers of the Pickle Factory restaurant in Pepin. In the winter, there are ice road
Ice road
Ice roads are frozen, human-made structures on the surface of bays, rivers, lakes, or seas in the far north. They link dry land, frozen waterways, portages and winter roads, and are usually remade each winter. Ice roads allow temporary transport to areas with no permanent road access...
s that cross the lake.

The lake was first named in a map of New France
New France
New France was the area colonized by France in North America during a period beginning with the exploration of the Saint Lawrence River by Jacques Cartier in 1534 and ending with the cession of New France to Spain and Great Britain in 1763...
made by Guillaume Delisle
Guillaume Delisle
Guillaume Delisle was a French cartographer who lived in Paris.His father, Claude Delisle studied law and then later settled in Paris as private teacher in geography and history, and afterwards filled the office of royal censor...
at the request of Louis XIV of France
Louis XIV of France
Louis XIV , known as Louis the Great or the Sun King , was a Bourbon monarch who ruled as King of France and Navarre. His reign, from 1643 to his death in 1715, began at the age of four and lasted seventy-two years, three months, and eighteen days...
in 1703. The lake is thought to be named after Pépin le Bref, father of Charlemagne
Charlemagne
Charlemagne was King of the Franks from 768 and Emperor of the Romans from 800 to his death in 814. He expanded the Frankish kingdom into an empire that incorporated much of Western and Central Europe. During his reign, he conquered Italy and was crowned by Pope Leo III on 25 December 800...
, as it was not a common surname in the area at the time.

Nicolas Perrot
Nicolas Perrot
Nicolas Perrot , explorer, diplomat, and fur trader, was one of the first white men in the upper Mississippi Valley. Born in France, he came to New France around 1660 with Jesuits and had the opportunity to visit Indian tribes and learn their languages...
erected the first of a number of fur trade posts, Fort Saint Antoine
Fort Saint Antoine
Fort Saint Antoine was a seventeenth-century French fort in Wisconsin.The fort was founded in 1686 by Nicholas Perrot and a group of Canadiens.-Perrot's expedition:...
, in 1786. In 1727 René Boucher de La Perrière and Michel Guignas built Fort Beauharnois
Fort Beauharnois
Fort Beauharnois was a French fort built on the shores of Lake Pepin, a wide part of the upper Mississippi River, in 1727. The location chosen was on lowlands and the fort was rebuilt in 1730 on higher ground. It was the site of the first Roman Catholic chapel in Minnesota, which was dedicated to...
on the lake. In 1730 it had to be rebuilt on higher ground. Boucher was the military leader and Father Guignas was a missionary to the Souix.

In 1890 it was the site of one of the worst maritime disasters on the Mississippi, known as the Sea Wing disaster when the Sea Wing ferry capsized in a bad storm, killing 98 people.

In 1922, Lake City native Ralph Samuelson
Ralph Samuelson
Ralph Wilford Samuelson was the inventor of water skiing, which he first performed in the summer of 1922 in Lake City, Minnesota, just before his 19th birthday. Samuelson was already skilled at aquaplaning—standing on a board while being pulled by a powerboat—but he hoped to create something like...
invented the sport of water skiing
Water skiing
thumb|right|A slalom skier making a turn on a slalom waterski.Waterskiing is a sport where an individual is pulled behind a boat or a cable ski installation on a body of water, skimming the surface.-History:...
on the lake which. Ever since that date, Lake City is known world wide as "the birthplace of waterskiing" and the city celebrates with a festival called Waterski Days every year on the last weekend in June.

Legends claim that the lake is home to a lake monster
Lake monster
A lake monster or loch monster is a purported form of fresh-water-dwelling megafauna appearing in mythology, rumor, or local folklore, but whose existence lacks scientific support. A well known example is the Loch Ness Monster. Lake monsters' depictions are often similar to some sea monsters...
, Pepie, which was recently reported to have first been seen on April 28, 1871, according to Archives at the Lake City Graphic and the book "The Minnesota Book of Days" published by the Minnesota State Historical Society.

Lake Pepin's natural flora are threatened by the increased rates of sedimentation from upstream sources, leading The Lake Pepin Legacy Alliance to call the phenomenon a "wet desert." The lake is filling in at a rate of ten times greater than pre-colonization, due largely to increased run-off from farms along the Minnesota River.
The source of this article is wikipedia, the free encyclopedia.  The text of this article is licensed under the GFDL.