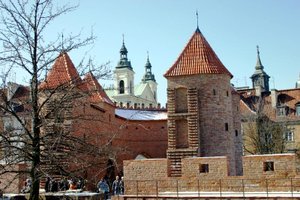 The barbican was erected in 1540 in place of an older gate
Gate
A gate is a point of entry to a space enclosed by walls, or a moderately sized opening in a fence. Gates may prevent or control entry or exit, or they may be merely decorative. Other terms for gate include yett and port...
to protect Nowomiejska Street. It was designed by Jan Baptist the Venetian, an Italian Renaissance
Italian Renaissance
The Italian Renaissance began the opening phase of the Renaissance, a period of great cultural change and achievement in Europe that spanned the period from the end of the 13th century to about 1600, marking the transition between Medieval and Early Modern Europe...
architect who lived and worked in the Mazowsze region of 16th century Poland
Kingdom of Poland (1385–1569)
The Kingdom of Poland of the Jagiellons was the Polish state created by the accession of Jogaila , Grand Duke of Lithuania, to the Polish throne in 1386. The Union of Krewo or Krėva Act, united Poland and Lithuania under the rule of a single monarch...
and was instrumental in the redesign of the 14th-century city walls, which by that time had fallen into disrepair. The barbican had the form of a three-level semicircular bastion
Bastion
A bastion, or a bulwark, is a structure projecting outward from the main enclosure of a fortification, situated in both corners of a straight wall , facilitating active defence against assaulting troops...
manned by fusiliers. It was 14 meters wide and 15 meters high from the bottom of the moat
Moat
A moat is a deep, broad ditch, either dry or filled with water, that surrounds a castle, other building or town, historically to provide it with a preliminary line of defence. In some places moats evolved into more extensive water defences, including natural or artificial lakes, dams and sluices...
, which surrounded the city walls, and extended 30 meters from the external walls.

Almost immediately after its inception, the 4-tower
Tower
A tower is a tall structure, usually taller than it is wide, often by a significant margin. Towers are distinguished from masts by their lack of guy-wires....
barbican became an anachronism
Anachronism
An anachronism—from the Greek ανά and χρόνος — is an inconsistency in some chronological arrangement, especially a chronological misplacing of persons, events, objects, or customs in regard to each other...
serving virtually no practical purpose. This was largely a result of the rapid advancement in artillery
Artillery
Originally applied to any group of infantry primarily armed with projectile weapons, artillery has over time become limited in meaning to refer only to those engines of war that operate by projection of munitions far beyond the range of effect of personal weapons...
power. It was used in the defense of the city only once, during the Swedish invasion
The Deluge (Polish history)
The term Deluge denotes a series of mid-17th century campaigns in the Polish–Lithuanian Commonwealth. In a wider sense it applies to the period between the Khmelnytsky Uprising of 1648 and the Truce of Andrusovo in 1667, thus comprising the Polish–Lithuanian theaters of the Russo-Polish and...
of Poland, on 30 June 1656, when it had to be recaptured by the Polish army
Army
An army An army An army (from Latin arma "arms, weapons" via Old French armée, "armed" (feminine), in the broadest sense, is the land-based military of a nation or state. It may also include other branches of the military such as the air force via means of aviation corps...
of Polish king Jan Kazimierz from the Swedes
Sweden
Sweden , officially the Kingdom of Sweden , is a Nordic country on the Scandinavian Peninsula in Northern Europe. Sweden borders with Norway and Finland and is connected to Denmark by a bridge-tunnel across the Öresund....
.

In the 18th century, the barbican was partially dismantled as its defensive value was negligible, and the city benefited more from a larger gate which facilitated movement of people and goods in and out of the city. In the 19th century, its remains were incorporated into newly-built apartment
Apartment
An apartment or flat is a self-contained housing unit that occupies only part of a building...
buildings (kamienica
Kamienica (architecture)
Kamienica is a Polish term describing a type of residential building made of brick or stone, with at least 2 floors. The word is usually used to describe a building which is incorporated with other, similar buildings....
). During the interwar period
Interwar period
Interwar period can refer to any period between two wars. The Interbellum is understood to be the period between the end of the Great War or First World War and the beginning of the Second World War in Europe....
, in 1937–1938, Jan Zachwatowicz
Jan Zachwatowicz
Jan Zachwatowicz was a Polish architect, architectural historian, and restorer.- Biography :...
reconstructed part of the walls and the western part of the bridge
Bridge
A bridge is a structure built to span physical obstacles such as a body of water, valley, or road, for the purpose of providing passage over the obstacle...
, demolishing one of the newer buildings in the reconstruction process. However, a lack of funds delayed the barbican's planned complete reconstruction, and the 1939 invasion of Poland
Invasion of Poland (1939)
The Invasion of Poland, also known as the September Campaign or 1939 Defensive War in Poland and the Poland Campaign in Germany, was an invasion of Poland by Germany, the Soviet Union, and a small Slovak contingent that marked the start of World War II in Europe...
by Nazi Germany
Nazi Germany
Nazi Germany , also known as the Third Reich , but officially called German Reich from 1933 to 1943 and Greater German Reich from 26 June 1943 onward, is the name commonly used to refer to the state of Germany from 1933 to 1945, when it was a totalitarian dictatorship ruled by...
put the plans on hold.

During World War II
World War II
World War II, or the Second World War , was a global conflict lasting from 1939 to 1945, involving most of the world's nations—including all of the great powers—eventually forming two opposing military alliances: the Allies and the Axis...
, particularly the Siege of Warsaw (1939)
Siege of Warsaw (1939)
The 1939 Battle of Warsaw was fought between the Polish Warsaw Army garrisoned and entrenched in the capital of Poland and the German Army...
and the Warsaw Uprising of 1944
Warsaw Uprising
The Warsaw Uprising was a major World War II operation by the Polish resistance Home Army , to liberate Warsaw from Nazi Germany. The rebellion was timed to coincide with the Soviet Union's Red Army approaching the eastern suburbs of the city and the retreat of German forces...
, the barbican was largely destroyed, as were most of the Old Town's buildings. It was rebuilt after the war, during 1952–1954, on the basis of 17th-century etching
Etching
Etching is the process of using strong acid or mordant to cut into the unprotected parts of a metal surface to create a design in intaglio in the metal...
s, as the new government decided it would be cheaper to rebuild the barbican and the nearby city walls as a tourist attraction
Tourist attraction
A tourist attraction is a place of interest where tourists visit, typically for its inherent or exhibited cultural value, historical significance, natural or built beauty, or amusement opportunities....
than to rebuild the tenements. In its reconstruction, brick
Brick
A brick is a block of ceramic material used in masonry construction, usually laid using various kinds of mortar. It has been regarded as one of the longest lasting and strongest building materials used throughout history.-History:...
s were used from historic buildings demolished in the cities of Nysa
Nysa, Poland
Nysa is a town in southwestern Poland on the Nysa Kłodzka river with 47,545 inhabitants , situated in the Opole Voivodeship. It is the capital of Nysa County. It comprises the urban portion of the surrounding Gmina Nysa, a mixed urban-rural commune with a total population of 60,123 inhabitants...
and Wrocław; most of the barbican was rebuilt, save for two exterior gates and the oldest tower on the side of the Old Town. It is currently a popular tourist attraction.