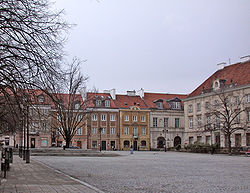 Warsaw
Warsaw
Warsaw is the capital and largest city of Poland. It is located on the Vistula River, roughly from the Baltic Sea and from the Carpathian Mountains. Its population in 2010 was estimated at 1,716,855 residents with a greater metropolitan area of 2,631,902 residents, making Warsaw the 10th most...
's New Town is a neighbourhood dating from the 15th century. It lies just north of the Old Town
Warsaw Old Town
Warsaw's Old Town is the oldest historic district of the city. It is bounded by Wybrzeże Gdańskie, along the bank of the Vistula, and by Grodzka, Mostowa and Podwale Streets. It is one of Warsaw's most prominent tourist attractions....
and is connected to it by ulica Freta (Freta Street), which begins at the Barbican
Warsaw Barbican
The Warsaw barbican is a barbican in Warsaw, Poland, and one of few remaining relics of the complex network of historic fortifications that once encircled Warsaw. Located between the Old and New Towns, it is a major tourist attraction.-History:The barbican was erected in 1540 in place of an older...
. Like the Old Town, the New Town was destroyed by the Nazis during World War II
World War II
World War II, or the Second World War , was a global conflict lasting from 1939 to 1945, involving most of the world's nations—including all of the great powers—eventually forming two opposing military alliances: the Allies and the Axis...
and rebuilt after the war.

The historic district
Historic district
A historic district or heritage district is a section of a city which contains older buildings considered valuable for historical or architectural reasons. In some countries, historic districts receive legal protection from development....
of the New Town was formed at the turn of the 14th century as an independent city. The official recognition of the New Town occurred in 1408, when it was measured out from the Old Town by an act issued by Janusz I the Old, Duke of Masovia. At that time the new city encompassed the territory of the New Town Market Square and streets - Freta, Kościelna, Koźla, Przyrynek, Stara and Zakroczymska. It was independent from the Old Town authorities and had its own vogt
Vogt
A Vogt ; plural Vögte; Dutch voogd; Danish foged; ; ultimately from Latin [ad]vocatus) in the Holy Roman Empire was the German title of a reeve or advocate, an overlord exerting guardianship or military protection as well as secular justice...
, council and a town hall. In 1411 the Parish Church of St. Mary
St. Mary's Church, Warsaw
The Church of the Visitation of the Most Blessed Virgin Mary , otherwise known as St. Mary's Church is a church in Warsaw, Poland. It is one of oldest buildings and one of the few surviving examples of Gothic architecture in the city. It is located at ulica Przyrynek 2.-History:St. Mary's Church...
was erected, and according to the 1546 mensuration there were 204 estates in the Warsaw New Town. The largest investment of that time was the Sigismund Augustus
Sigismund II Augustus
Sigismund II Augustus I was King of Poland and Grand Duke of Lithuania, the only son of Sigismund I the Old, whom Sigismund II succeeded in 1548...
bridge built between 1568-1573 by Erazm Cziotko (c. 500 m (1,640.4 ft) long). Unfortunately it was destroyed in 1603 by the floats.
The disastrous time of the Swedish-Brandenburg
Brandenburg
Brandenburg is one of the sixteen federal-states of Germany. It lies in the east of the country and is one of the new federal states that were re-created in 1990 upon the reunification of the former West Germany and East Germany. The capital is Potsdam...
ian invasion (1655–1660), left the predominantly timber building of the New Town burned, but due to those events many beautiful and more permanent constructions were erected (Town Hall, built in 1680, St. Kazimierz Church, 1688–1692 and Kotowski Palace
Kotowski Palace
Kotowski Palace was a 17th-century palace in Warsaw, Poland. It served as a main cloister building for sisters of Benedictine Sisters of Perpetual Adoration.-History:...
, 1682–1684, Holy Spirit Church, 1707–1717 and ornate chapel of Kotowski family, constructed in 1691-1694) by the most prominent Warsaw architects (especially Tylman Gamerski
Tylman van Gameren
Tylman van Gameren was a Dutch-born Polish architect and engineer who, at the age of 28, settled in Poland and worked for Queen Maria Kazimiera, wife of Poland's King Jan III Sobieski...
). After 1791, due to the tenets of the Constitution of May 3, 1791
Constitution of May 3, 1791
The Constitution of May 3, 1791 was adopted as a "Government Act" on that date by the Sejm of the Polish–Lithuanian Commonwealth. Historian Norman Davies calls it "the first constitution of its type in Europe"; other scholars also refer to it as the world's second oldest constitution...
, the New Town was incorporated into the city of Warsaw. That is why the inutile Town Hall was pulled down in 1818.

During the Warsaw Uprising
Warsaw Uprising
The Warsaw Uprising was a major World War II operation by the Polish resistance Home Army , to liberate Warsaw from Nazi Germany. The rebellion was timed to coincide with the Soviet Union's Red Army approaching the eastern suburbs of the city and the retreat of German forces...
(1 August – 2 October 1944) the New Town was completely destroyed due to the extensive bombardment
Bombardment
A bombardment is an attack by artillery fire directed against fortifications, troops or towns and buildings.Prior to World War I the term term was only applied to the bombardment of defenceless or undefended objects, houses, public buildings, it was only loosely employed to describe artillery...
of the insurgent positions by the Germans. Many historic edifices, that served as hospital
Hospital
A hospital is a health care institution providing patient treatment by specialized staff and equipment. Hospitals often, but not always, provide for inpatient care or longer-term patient stays....
s and shelters for the inhabitants were razed to the ground. The reconstruction of the New Town started in 1954, but some of the significant buildings were not restored by the Communist authorities
People's Republic of Poland
The People's Republic of Poland was the official name of Poland from 1952 to 1990. Although the Soviet Union took control of the country immediately after the liberation from Nazi Germany in 1944, the name of the state was not changed until eight years later...
(e.g. Kotowski Palace).