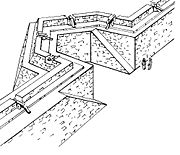 A bastion, or a bulwark, is a structure projecting outward from the main enclosure of a fortification
Fortification
Fortifications are military constructions and buildings designed for defence in warfare and military bases. Humans have constructed defensive works for many thousands of years, in a variety of increasingly complex designs...
, situated in both corners of a straight wall (termed curtain
Curtain wall (fortification)
A curtain wall is a defensive wall between two bastions of a castle or fortress.In earlier designs of castle the curtain walls were often built to a considerable height and were fronted by a ditch or moat to make assault difficult....
), facilitating active defence against assaulting troops. It allows the defenders of the fort to cover adjacent bastions and curtains with defensive fire.

The bastion was designed to offer a full range on which to attack oncoming troops. Previous fortifications were of little use within a certain range. The bastion solved this problem. By using a cannon
Cannon
A cannon is any piece of artillery that uses gunpowder or other usually explosive-based propellents to launch a projectile. Cannon vary in caliber, range, mobility, rate of fire, angle of fire, and firepower; different forms of cannon combine and balance these attributes in varying degrees,...
to cover the curtain side of the wall, the forward cannon could concentrate on oncoming targets. However if a bastion was successfully stormed it would provide the attackers with a stronghold from which to launch further attacks. Some bastion designs attempted to minimise this problem, however.

Various kinds of bastions have been used throughout history.