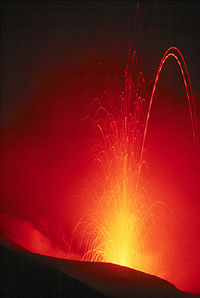 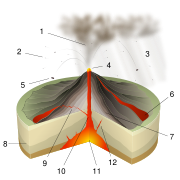 Strombolian eruptions are relatively low-level volcanic
Volcano
2. Bedrock3. Conduit 4. Base5. Sill6. Dike7. Layers of ash emitted by the volcano8. Flank| 9. Layers of lava emitted by the volcano10. Throat11. Parasitic cone12. Lava flow13. Vent14. Crater15...
eruptions, named after the Italian
Italy
Italy , officially the Italian Republic languages]] under the European Charter for Regional or Minority Languages. In each of these, Italy's official name is as follows:;;;;;;;;), is a unitary parliamentary republic in South-Central Europe. To the north it borders France, Switzerland, Austria and...
volcano Stromboli
Stromboli
Stromboli is a small island in the Tyrrhenian Sea, off the north coast of Sicily, containing one of the three active volcanoes in Italy. It is one of the eight Aeolian Islands, a volcanic arc north of Sicily. This name is a corruption of the Ancient Greek name Strongulē which was given to it...
, where such eruptions consist of ejection of incandescent cinder
Cinder
A cinder is a pyroclastic material. Cinders are extrusive igneous rocks. Cinders are similar to pumice, which has so many cavities and is such low-density that it can float on water...
, lapilli
Lapilli
Lapilli is a size classification term for tephra, which is material that falls out of the air during a volcanic eruption or during some meteorite impacts. Lapilli means "little stones" in Latin. They are in some senses similar to ooids or pisoids in calcareous sediments.By definition lapilli range...
and lava bombs to altitudes of tens to hundreds of meters. They are small to medium in volume, with sporadic violence.

They are defined as "...Mildly explosive at discrete but fairly regular intervals of seconds to minutes..."

The tephra
Tephra
200px|thumb|right|Tephra horizons in south-central [[Iceland]]. The thick and light coloured layer at center of the photo is [[rhyolitic]] tephra from [[Hekla]]....
typically glows red when leaving the vent, but its surface cools and assumes a dark to black color and may significantly solidify before impact. The tephra accumulates in the vicinity of the vent, forming a cinder cone
Cinder cone
According to the , Cinder Cone is the proper name of 1 cinder cone in Canada and 7 cinder cones in the United States:In Canada: Cinder Cone In the United States:...
. Cinder is the most common product, the amount of volcanic ash
Volcanic ash
Volcanic ash consists of small tephra, which are bits of pulverized rock and glass created by volcanic eruptions, less than in diameter. There are three mechanisms of volcanic ash formation: gas release under decompression causing magmatic eruptions; thermal contraction from chilling on contact...
is typically rather minor.

The lava
Lava
Lava refers both to molten rock expelled by a volcano during an eruption and the resulting rock after solidification and cooling. This molten rock is formed in the interior of some planets, including Earth, and some of their satellites. When first erupted from a volcanic vent, lava is a liquid at...
flows are more viscous, and therefore shorter and thicker, than the corresponding Hawaiian eruptions
Hawaiian eruption
A Hawaiian eruption is a type of volcanic eruption where lava flows from the vent in a relative gentle, low level eruption, so called because it is characteristic of Hawaiian volcanoes. Typically they are effusive eruptions, with basaltic magmas of low viscosity, low content of gases, and high...
; it may or may not be accompanied by production of pyroclastic rock
Pyroclastic rock
Pyroclastic rocks or pyroclastics are clastic rocks composed solely or primarily of volcanic materials. Where the volcanic material has been transported and reworked through mechanical action, such as by wind or water, these rocks are termed volcaniclastic...
.

Instead the gas coalesces into bubbles, called gas slug
Gas slug
A gas slug is a conglomerate of high pressure gas bubbles that forms within certain volcanoes, the agittation of which is a key driving factor in Strombolian eruptions. They start out as small bubbles of gas inside of volcanic magma. These accumulate into one large bubble, which starts to rise...
s, that grow large enough to rise through the magma column, bursting near the top due to the decrease in pressure and throwing magma into the air. Each episode thus releases volcanic gases, sometimes as frequently as a few minutes apart. Gas slugs can form as deep as 3 kilometers, making them difficult to predict.

Strombolian eruptive activity can be very long-lasting because the conduit system is not strongly affected by the eruptive activity, so that the eruptive system can repeatedly reset itself.
For example, the Parícutin
Paricutín
Parícutin is a cinder cone volcano in the Mexican state of Michoacán, close to a lava-covered village of the same name. It appears on many versions of the Seven Natural Wonders of the World...
volcano erupted continuously between 1943-1952, Mount Erebus
Mount Erebus
Mount Erebus in Antarctica is the southernmost historically active volcano on Earth, the second highest volcano in Antarctica , and the 6th highest ultra mountain on an island. With a summit elevation of , it is located on Ross Island, which is also home to three inactive volcanoes, notably Mount...
, Antarctica has produced Strombolian eruptions for at least many decades, and Stromboli
Stromboli
Stromboli is a small island in the Tyrrhenian Sea, off the north coast of Sicily, containing one of the three active volcanoes in Italy. It is one of the eight Aeolian Islands, a volcanic arc north of Sicily. This name is a corruption of the Ancient Greek name Strongulē which was given to it...
itself has been producing Strombolian eruptions for several thousand years.