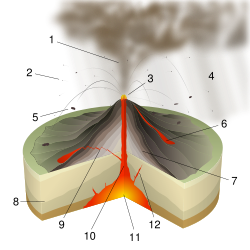 The term Vulcanian was first used by Giuseppe Mercalli
Giuseppe Mercalli
Giuseppe Mercalli was an Italian volcanologist. He is best remembered today for his Mercalli scale for measuring earthquakes which is still used today.-Biography:...
, witnessing the 1888-1890 eruptions on the island of Vulcano
Vulcano
thumb| The Gran Cratere. A sense of scale is provided by the tourist visible near the centre of the crater.thumb|right|250px|View of Vulcano from the island of Lipari. The green islet centre left is Vulcanello, which is connected to Vulcano by an isthmus...
. His description of the eruption style is now used all over the world for eruptions characterised by a dense cloud of ash-laden gas exploding from the crater and rising high above the peak. Mercalli described vulcanian eruptions as "...Explosions like cannon fire at irregular intervals..." Their explosive nature is due to increased silica content of the magma. Almost all types of magma
Magma
Magma is a mixture of molten rock, volatiles and solids that is found beneath the surface of the Earth, and is expected to exist on other terrestrial planets. Besides molten rock, magma may also contain suspended crystals and dissolved gas and sometimes also gas bubbles. Magma often collects in...
can be involved, but magma with about 55% or more silica (basalt–andesite) is most common. Increasing silica levels increase the viscosity of the magma which means increased explosiveness. They usually commence with phreatomagmatic eruptions which can be extremely noisy due the rising magma heating water in the ground. This is usually followed by the explosive clearing of the vent and the eruption column is dirty grey to black as old weathered rocks are blasted out of the vent. As the vent clears, further ash clouds become grey-white and creamy in colour, with convolutions of the ash similar to those of plinian eruptions.

Vulcanian eruptions display several common characteristics. The mass of rock ejected during the eruption is usually between 102 - 106 tonnes and contains a high proportion of non-juvinial material (> 50%). During active periods of volcanic activity, intervals between explosions vary from less than 1 minute (e.g. Anak Krakatoa) to about a day. Pyroclastic flows are also common features of this type of eruption . The gas streaming phase of these eruptions are characterised discrete canon-like explosions, which are a particular features of vulcanian eruptions . These expulsions of gas can reach supersonic velocities resulting in shock waves .

The tephra
Tephra
200px|thumb|right|Tephra horizons in south-central [[Iceland]]. The thick and light coloured layer at center of the photo is [[rhyolitic]] tephra from [[Hekla]]....
is dispersed over a wider areas than that from Strombolian
Strombolian eruption
Strombolian eruptions are relatively low-level volcanic eruptions, named after the Italian volcano Stromboli, where such eruptions consist of ejection of incandescent cinder, lapilli and lava bombs to altitudes of tens to hundreds of meters...
eruptions. The pyroclastic rock
Pyroclastic rock
Pyroclastic rocks or pyroclastics are clastic rocks composed solely or primarily of volcanic materials. Where the volcanic material has been transported and reworked through mechanical action, such as by wind or water, these rocks are termed volcaniclastic...
and the base surge deposits form an ash volcanic cone
Volcanic cone
Volcanic cones are among the simplest volcanic formations. They are built by ejecta from a volcanic vent, piling up around the vent in the shape of a cone with a central crater. Volcanic cones are of different types, depending upon the nature and size of the fragments ejected during the eruption...
, while the ash covers a large surrounding area. The eruption ends with a flow of viscous lava. Vulcanian eruptions may throw large metre-size blocks several hundred metres, occasionally up to several kilometres.

Vulcanian eruptions are dangerous to persons within several hundred metres of the vent. One feature of this type of eruption is the "Volcanic bomb
Volcanic bomb
A volcanic bomb is a mass of molten rock larger than 65 mm in diameter, formed when a volcano ejects viscous fragments of lava during an eruption. They cool into solid fragments before they reach the ground. Because volcanic bombs cool after they leave the volcano, they do not have grains...
." These can be blocks often 2 to 3 m in dimensions. At Galeras
Galeras
Galeras is an Andean stratovolcano in the Colombian department of Nariño, near the departmental capital Pasto. Its summit rises above sea level. It has erupted frequently since the Spanish conquest, with its first historical eruption being recorded on December 7, 1580...
a vulcanian eruption ejected bombs which impacted with several volcanologists who were in the crater and many died or suffered terrible injuries.

The 11 September 1930 eruption of Stromboli
Stromboli
Stromboli is a small island in the Tyrrhenian Sea, off the north coast of Sicily, containing one of the three active volcanoes in Italy. It is one of the eight Aeolian Islands, a volcanic arc north of Sicily. This name is a corruption of the Ancient Greek name Strongulē which was given to it...
was a vulcanian eruption. It started at 08:10 hours (local), when ash was vented for about 10 minutes. Then at 09:52 two incredibly powerful explosions occurred which shook the whole island. Blocks were hurled about 2 km. These fell out of the sky smashing through buildings etc. A tsunami
Tsunami
A tsunami is a series of water waves caused by the displacement of a large volume of a body of water, typically an ocean or a large lake...
2 to 2.5m high was generated. By 10:40 the explosive phase of the eruption was over. Expulsion of lava followed, this flowed down the Sciara del Fuoco, lasting into the night. At the same time incandescent scoria
Scoria
Scoria is a volcanic rock containing many holes or vesicles. It is most generally dark in color , and basaltic or andesitic in composition. Scoria is relatively low in mass as a result of its numerous macroscopic ellipsoidal vesicles, but in contrast to pumice, all scoria has a specific gravity...
flowed down the Vallonazzo Valley and entered the sea near Piscità.

By the end, 6 people had died. Four fishermen died at sea when the avalanches of hot scoria caused the sea to become very disturbed. One person was killed in Stromboli village by falling blocks, and the 6th was killed by the tsunami. It is believed that water entered the conduit due to a partial collapse of the conduit. The water flashed into steam and took the easiest "escape route," via the open conduit. As it expanded in the molten magma it generated the two very large explosions.