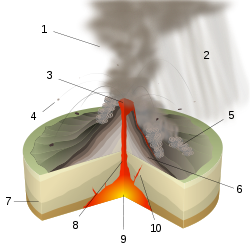 Peléan eruptions are a type of volcanic eruption
Types of volcanic eruptions
During a volcanic eruption, lava, tephra , and various gases are expelled from a volcanic vent or fissure. Several types of volcanic eruptions have been distinguished by volcanologists. These are often named after famous volcanoes where that type of behavior has been observed...
. They can occur when viscous magma
Magma
Magma is a mixture of molten rock, volatiles and solids that is found beneath the surface of the Earth, and is expected to exist on other terrestrial planets. Besides molten rock, magma may also contain suspended crystals and dissolved gas and sometimes also gas bubbles. Magma often collects in...
, typically of rhyolitic
Rhyolite
This page is about a volcanic rock. For the ghost town see Rhyolite, Nevada, and for the satellite system, see Rhyolite/Aquacade.Rhyolite is an igneous, volcanic rock, of felsic composition . It may have any texture from glassy to aphanitic to porphyritic...
or andesitic
Andesite
Andesite is an extrusive igneous, volcanic rock, of intermediate composition, with aphanitic to porphyritic texture. In a general sense, it is the intermediate type between basalt and dacite. The mineral assemblage is typically dominated by plagioclase plus pyroxene and/or hornblende. Magnetite,...
type, is involved, and share some similarities with Vulcanian eruptions
Vulcanian eruption
The term Vulcanian was first used by Giuseppe Mercalli, witnessing the 1888-1890 eruptions on the island of Vulcano. His description of the eruption style is now used all over the world for eruptions characterised by a dense cloud of ash-laden gas exploding from the crater and rising high above the...
. The most important characteristics of a Peléan eruption is the presence of a glowing avalanche of hot volcanic ash
Volcanic ash
Volcanic ash consists of small tephra, which are bits of pulverized rock and glass created by volcanic eruptions, less than in diameter. There are three mechanisms of volcanic ash formation: gas release under decompression causing magmatic eruptions; thermal contraction from chilling on contact...
, a pyroclastic flow
Pyroclastic flow
A pyroclastic flow is a fast-moving current of superheated gas and rock , which reaches speeds moving away from a volcano of up to 700 km/h . The flows normally hug the ground and travel downhill, or spread laterally under gravity...
. Formation of lava dome
Lava dome
|250px|thumb|right|Image of the [[rhyolitic]] lava dome of [[Chaitén Volcano]] during its 2008–2009 eruption.In volcanology, a lava dome is a roughly circular mound-shaped protrusion resulting from the slow extrusion of viscous lava from a volcano...
s is another characteristical feature. Short flows of ash or creation of pumice
Pumice
Pumice is a textural term for a volcanic rock that is a solidified frothy lava typically created when super-heated, highly pressurized rock is violently ejected from a volcano. It can be formed when lava and water are mixed. This unusual formation is due to the simultaneous actions of rapid...
cones may be observed as well.

The initial phases of eruption are characterized by pyroclastic flow
Pyroclastic flow
A pyroclastic flow is a fast-moving current of superheated gas and rock , which reaches speeds moving away from a volcano of up to 700 km/h . The flows normally hug the ground and travel downhill, or spread laterally under gravity...
s. The tephra
Tephra
200px|thumb|right|Tephra horizons in south-central [[Iceland]]. The thick and light coloured layer at center of the photo is [[rhyolitic]] tephra from [[Hekla]]....
deposits have lower volume and range than the corresponding Plinian
Plinian eruption
Plinian eruptions, also known as 'Vesuvian eruptions', are volcanic eruptions marked by their similarity to the eruption of Mount Vesuvius in AD 79 ....
and Vulcanian eruptions. The viscous magma then forms a steep-sided dome or volcanic spine
Lava spine
A lava spine is a vertically growing monolith of viscous lava that is slowly forced from a volcanic vent, such as those growing on a lava dome . It may also be considered a kind of dome called a spiny dome . In February of 1983, the dome activity of Mount St...
in the volcano's vent. The dome may later collapse, resulting in flows of ash and hot blocks. The eruption cycle is usually completed in few years, but in some cases may continue for decades, like in the case of Santiaguito.

The 1902 explosion of Mount Pelée
Mount Pelée
Mount Pelée is an active volcano at the northern end of the island and French overseas department of Martinique in the Lesser Antilles island arc of the Caribbean. Its volcanic cone is composed of layers of volcanic ash and hardened lava....
is the first described case of a Peléan eruption, and gave it its name.