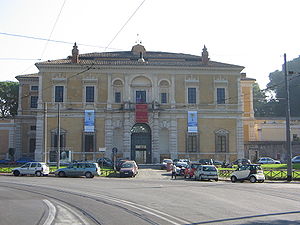 The Villa Giulia is a villa in Rome
Rome
Rome is the capital of Italy and the country's largest and most populated city and comune, with over 2.7 million residents in . The city is located in the central-western portion of the Italian Peninsula, on the Tiber River within the Lazio region of Italy.Rome's history spans two and a half...
, Italy
Italy
Italy , officially the Italian Republic languages]] under the European Charter for Regional or Minority Languages. In each of these, Italy's official name is as follows:;;;;;;;;), is a unitary parliamentary republic in South-Central Europe. To the north it borders France, Switzerland, Austria and...
. It was built by Pope Julius III
Pope Julius III
Pope Julius III , born Giovanni Maria Ciocchi del Monte, was Pope from 7 February 1550 to 1555....
in 1550–1555 on what was then the edge of the city. Today it is publicly owned, and houses the Museo Nazionale Etrusco
National Etruscan Museum
The National Etruscan Museum is a museum of the Etruscan civilization housed in the Villa Giulia in Rome, Italy.-History:The villa was built by the popes and remained their property until 1870 when, in the wake of the Risorgimento and the demise of the Papal States, it became the property of the...
, an impressive collection of Etruscan
Etruscan civilization
Etruscan civilization is the modern English name given to a civilization of ancient Italy in the area corresponding roughly to Tuscany. The ancient Romans called its creators the Tusci or Etrusci...
art and artifacts.

The villa was built in an area of Rome known as the 'Vigna Vecchia' (which was once against the city walls
Aurelian Walls
The Aurelian Walls is a line of city walls built between 271 and 275 in Rome, Italy, during the reign of the Roman Emperors Aurelian and Probus....
), lying on the slopes of Monte Parioli, as a 'Villa Suburbana' and a place of repose.

The pope, a highly literate connoisseur of the arts, assigned the initial design of the building to Giacomo Barozzi da Vignola
Giacomo Barozzi da Vignola
Giacomo Barozzi da Vignola was one of the great Italian architects of 16th century Mannerism. His two great masterpieces are the Villa Farnese at Caprarola and the Jesuits' Church of the Gesù in Rome...
in 1551–1553. The nymphaeum
Nymphaeum
A nymphaeum or nymphaion , in ancient Greece and Rome, was a monument consecrated to the nymphs, especially those of springs....
and other garden structures, however, were designed by Bartolomeo Ammanati
Bartolomeo Ammanati
Bartolomeo Ammannati was an Italian architect and sculptor, born at Settignano, near Florence. He studied under Baccio Bandinelli and Jacopo Sansovino and closely imitated the style of Michelangelo.He was more distinguished in architecture than in sculpture...
, all under the supervision of Giorgio Vasari
Giorgio Vasari
Giorgio Vasari was an Italian painter, writer, historian, and architect, who is famous today for his biographies of Italian artists, considered the ideological foundation of art-historical writing.-Biography:...
. Michelangelo
Michelangelo
Michelangelo di Lodovico Buonarroti Simoni , commonly known as Michelangelo, was an Italian Renaissance painter, sculptor, architect, poet, and engineer who exerted an unparalleled influence on the development of Western art...
also worked there. Pope Julius took a direct interest in the villa's design and decor and spent vast amounts of money on enhancing its beauties. Villa Giulia became one of the most delicate examples of Mannerist architecture.

Only a small part of the original property has survived intact, comprising three vineyards which extended down to the Tiber, and to which the pope traveled often by boat. The villa, as was customary, had an urban entrance (on the Roman Via Flaminia
Via Flaminia
The Via Flaminia was an ancient Roman road leading from Rome over the Apennine Mountains to Ariminum on the coast of the Adriatic Sea, and due to the ruggedness of the mountains was the major option the Romans had for travel between Etruria, Latium and Campania and the Po Valley...
) and a formal but rural garden entrance. The Villa itself was on the threshold between two worlds, that of the city and that of the country, an essentially Roman concept. A medal struck in 1553 shows the villa as substantially complete, but with a pair of cupolas which were never executed.

Vignola's urban front of the building is a somber two story facade with each story being given equal value. It has at its centre the triple rhythm of a richly detailed rusticated
Rustication (architecture)
thumb|upright|Two different styles of rustication in the [[Palazzo Medici-Riccardi]] in [[Florence]].In classical architecture rustication is an architectural feature that contrasts in texture with the smoothly finished, squared block masonry surfaces called ashlar...
triumphal arch
Triumphal arch
A triumphal arch is a monumental structure in the shape of an archway with one or more arched passageways, often designed to span a road. In its simplest form a triumphal arch consists of two massive piers connected by an arch, crowned with a flat entablature or attic on which a statue might be...
flanked by symmetrical wings of two bays only. The facade is terminated at each end by Doric
Doric order
The Doric order was one of the three orders or organizational systems of ancient Greek or classical architecture; the other two canonical orders were the Ionic and the Corinthian.-History:...
pilaster
Pilaster
A pilaster is a slightly-projecting column built into or applied to the face of a wall. Most commonly flattened or rectangular in form, pilasters can also take a half-round form or the shape of any type of column, including tortile....
s. In this facade of the Villa Giulia is the genesis of the seven-bay 18th century Georgian
Georgian architecture
Georgian architecture is the name given in most English-speaking countries to the set of architectural styles current between 1720 and 1840. It is eponymous for the first four British monarchs of the House of Hanover—George I of Great Britain, George II of Great Britain, George III of the United...
villa, which was reproduced as far away as the Tidewater region of Virginia
Tidewater region of Virginia
The Tidewater region of Virginia is the eastern portion of the Commonwealth of Virginia formally known as Hampton Roads. The term tidewater may be correctly applied to all portions of any area, including Virginia, where the water level is affected by the tides...
.
The rear of the building has Vignola's large hemispherical loggia
Loggia
Loggia is the name given to an architectural feature, originally of Minoan design. They are often a gallery or corridor at ground level, sometimes higher, on the facade of a building and open to the air on one side, where it is supported by columns or pierced openings in the wall...
overlooking the first of three courtyards, laid out as a simple parterre
Parterre
A parterre is a formal garden construction on a level surface consisting of planting beds, edged in stone or tightly clipped hedging, and gravel paths arranged to form a pleasing, usually symmetrical pattern. Parterres need not have any flowers at all...
.

At its rear the visitor passes through the casina, which again has a hemispherical rear facade, enclosing paired flights of re-entrant marble steps that give access to the heart of the villa complex: a two-story Nympheum for alfresco dining during the heat of the summer. This three-levelled structure of covered loggias, decorated with marble statuary, reclining river gods in niches, and balustrading, is constructed around a central fountain. Here in this cool environment, sheltered from the blazing sun, day-long picnics would be held. The central fountain, Fontana dell'Acqua Vergine, was designed and sculpted by Vasari and Ammannati: it depicts river gods and caryatid
Caryatid
A caryatid is a sculpted female figure serving as an architectural support taking the place of a column or a pillar supporting an entablature on her head. The Greek term karyatides literally means "maidens of Karyai", an ancient town of Peloponnese...
s. The fountain's source, the Acqua Vergine
Acqua Vergine
Acqua Vergine is one of the several aqueducts that serve the city of Rome, in Italy, with pure drinking-water. The name derives from the name of its predecessor, Aqua Virgo, which was constructed by Marcus Agrippa in 19 BC, terminating at its castellum at the Baths of Agrippa, and, through a...
, also supplies the Trevi Fountain
Trevi Fountain
The Trevi Fountain is a fountain in the Trevi rione in Rome, Italy. Standing 26 metres high and 20 metres wide, it is the largest Baroque fountain in the city and one of the most famous fountains in the world....
in Rome.

The Casino della Vigna ("little house in the vineyard
Vineyard
A vineyard is a plantation of grape-bearing vines, grown mainly for winemaking, but also raisins, table grapes and non-alcoholic grape juice...
"), as it was sometimes known, and its gardens were set in the midst of vineyards, which could be viewed from shaded arcades on the outsides of the garden walls. Papal parties embarked on boats at the gates of the Vatican
Apostolic Palace
The Apostolic Palace is the official residence of the Pope, which is located in Vatican City. It is also known as the Sacred Palace, the Papal Palace and the Palace of the Vatican...
and were transported up the Tiber
Tiber
The Tiber is the third-longest river in Italy, rising in the Apennine Mountains in Emilia-Romagna and flowing through Umbria and Lazio to the Tyrrhenian Sea. It drains a basin estimated at...
to the villa's long-gone private landing stage.

Following Pope Julius' death, his successor Pope Paul IV
Pope Paul IV
Pope Paul IV, C.R. , né Giovanni Pietro Carafa, was Pope from 23 May 1555 until his death.-Early life:Giovanni Pietro Carafa was born in Capriglia Irpina, near Avellino, into a prominent noble family of Naples...
confiscated all the properties he had assembled; the villa was divided, and the main building and part of the gardens became the property of the Camera apostolica. The Villa was reserved for the use of the new pope's Borromeo
Borromeo
-Members of the House of Borromeo:* Andrea Borromeo, a Theatine priest* Charles Borromeo , cardinal of the Roman Catholic Church* Federico Borromeo , archbishop of Milan, cousin of Charles-Other people:...
nephews. It was restored in 1769 on the initiative of Pope Clement XIV
Pope Clement XIV
Pope Clement XIV , born Giovanni Vincenzo Antonio Ganganelli, was Pope from 1769 to 1774. At the time of his election, he was the only Franciscan friar in the College of Cardinals.-Early life:...
, confiscated by the new state of Italy
Italy
Italy , officially the Italian Republic languages]] under the European Charter for Regional or Minority Languages. In each of these, Italy's official name is as follows:;;;;;;;;), is a unitary parliamentary republic in South-Central Europe. To the north it borders France, Switzerland, Austria and...
in 1870, and given over to the National Etruscan Museum in the early 20th century.