Encyclopedia
Loggia is the name given to an architectural feature, originally of Minoan
Minoan civilization
The Minoan civilization was a Bronze Age civilization that arose on the island of Crete and flourished from approximately the 27th century BC to the 15th century BC. It was rediscovered at the beginning of the 20th century through the work of the British archaeologist Arthur Evans...
design. They are often a gallery or corridor at ground level, sometimes higher, on the facade
Facade
A facade or façade is generally one exterior side of a building, usually, but not always, the front. The word comes from the French language, literally meaning "frontage" or "face"....
of a building and open to the air on one side, where it is supported by column
Column
A column or pillar in architecture and structural engineering is a vertical structural element that transmits, through compression, the weight of the structure above to other structural elements below. For the purpose of wind or earthquake engineering, columns may be designed to resist lateral forces...
s or pierced openings in the wall. Notably, Filippo Brunelleschi
Filippo Brunelleschi
Filippo Brunelleschi was one of the foremost architects and engineers of the Italian Renaissance. He is perhaps most famous for inventing linear perspective and designing the dome of the Florence Cathedral, but his accomplishments also included bronze artwork, architecture , mathematics,...
featured a loggia at the front of the Ospedale degli Innocenti
Ospedale degli Innocenti
The Ospedale degli Innocenti is a historical building in Florence, central Italy. Designed by Filippo Brunelleschi, who received the commission in 1419, it was originally a children's orphanage. It is regarded as a notable example of early Italian Renaissance architecture...
(Hospital of the Innocents) in Florence
Florence
Florence is the capital city of the Italian region of Tuscany and of the province of Florence. It is the most populous city in Tuscany, with approximately 370,000 inhabitants, expanding to over 1.5 million in the metropolitan area....
, Italy.

The loggia can also be an alternative to the portico
Portico
A portico is a porch leading to the entrance of a building, or extended as a colonnade, with a roof structure over a walkway, supported by columns or enclosed by walls...
. In this form it is mostly described as a recessed portico, or an internal room, with pierced walls and open to the elements. Occasionally a loggia is placed at the second floor level, above a loggia on the main floor; this is known as a 'double loggia'. Loggias sometimes were given significance in a facade by being surmounted by a pediment
Pediment
A pediment is a classical architectural element consisting of the triangular section found above the horizontal structure , typically supported by columns. The gable end of the pediment is surrounded by the cornice moulding...
.

The main difference between a loggia and a portico is the role within the functional layout of the building. The portico allows access to the inside from the exterior, and can be found on vernacular
Vernacular architecture
Vernacular architecture is a term used to categorize methods of construction which use locally available resources and traditions to address local needs and circumstances. Vernacular architecture tends to evolve over time to reflect the environmental, cultural and historical context in which it...
and small scale buildings. The loggia is accessed only from inside, making it a place for leisure. Thus, it is found mainly on noble residences and public buildings. 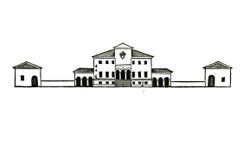 A classic use of both is that represented in the Mosaics of Basilica of Sant' Apollinare Nuovo of the Royal Palace to which it was Chapel.

Today, a loggia can be a small, often ornate, summer house built on the roof of a residence to enjoy cooling winds and admire the view. They are typical of Italian architecture and were especially popular in the 17th century. They are prominent in Rome
Rome
Rome is the capital of Italy and the country's largest and most populated city and comune, with over 2.7 million residents in . The city is located in the central-western portion of the Italian Peninsula, on the Tiber River within the Lazio region of Italy.Rome's history spans two and a half...
.