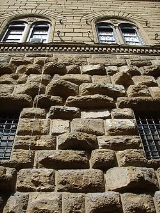 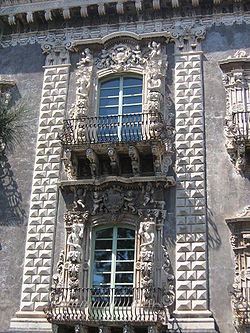 In classical architecture
Classical architecture
Classical architecture is a mode of architecture employing vocabulary derived in part from the Greek and Roman architecture of classical antiquity, enriched by classicizing architectural practice in Europe since the Renaissance...
rustication is an architectural
Architecture
Architecture is both the process and product of planning, designing and construction. Architectural works, in the material form of buildings, are often perceived as cultural and political symbols and as works of art...
feature that contrasts in texture with the smoothly finished, squared block masonry surfaces called ashlar
Ashlar
Ashlar is prepared stone work of any type of stone. Masonry using such stones laid in parallel courses is known as ashlar masonry, whereas masonry using irregularly shaped stones is known as rubble masonry. Ashlar blocks are rectangular cuboid blocks that are masonry sculpted to have square edges...
. Rusticated masonry is usually squared-off but left with a more or less rough outer surface and wide joints that emphasize the edges of each block. Rustication is often used to give visual weight to the ground floor in contrast to smooth ashlar above.

In variations of rustication the stone is left with a rough external surface, or rough shapes are drilled or chiselled in the somewhat smoothed face in a technique called "vermiculation" (vermiculate rustication). If deeply cut-back edges are worked only to the horizontal joints, with the appearance of the vertical joints being minimised, the resulting effect is known as banded rustication. In prismatic rustication, the blocks are dressed at an angle top and bottom and at each end, giving the effect of a prism
Prism (geometry)
In geometry, a prism is a polyhedron with an n-sided polygonal base, a translated copy , and n other faces joining corresponding sides of the two bases. All cross-sections parallel to the base faces are the same. Prisms are named for their base, so a prism with a pentagonal base is called a...
.

Although rustication is known from a few buildings of Roman Antiquity, the method first became popular during the Renaissance
Renaissance
The Renaissance was a cultural movement that spanned roughly the 14th to the 17th century, beginning in Italy in the Late Middle Ages and later spreading to the rest of Europe. The term is also used more loosely to refer to the historical era, but since the changes of the Renaissance were not...
, when the stone work of lower floors, and sometimes entire facade
Facade
A facade or façade is generally one exterior side of a building, usually, but not always, the front. The word comes from the French language, literally meaning "frontage" or "face"....
s, of buildings was finished in this manner. Donato Bramante
Donato Bramante
Donato Bramante was an Italian architect, who introduced the Early Renaissance style to Milan and the High Renaissance style to Rome, where his most famous design was St...
's Palazzo Caprini ("House of Raphael") in Rome provided a standard model, where the obvious strength of a blind arcade
Arcade (architecture)
An arcade is a succession of arches, each counterthrusting the next, supported by columns or piers or a covered walk enclosed by a line of such arches on one or both sides. In warmer or wet climates, exterior arcades provide shelter for pedestrians....
with emphatic voussoir
Voussoir
A voussoir is a wedge-shaped element, typically a stone, used in building an arch or vault.Although each unit in an arch or vault is a voussoir, two units are of distinct functional importance: the keystone and the springer. The keystone is the center stone or masonry unit at the apex of an arch. A...
s on the basement level gave reassuring support to the upper storey's paired columns standing on rusticated piers
Pier (architecture)
In architecture, a pier is an upright support for a superstructure, such as an arch or bridge. Sections of wall between openings function as piers. The simplest cross section of the pier is square, or rectangular, although other shapes are also common, such as the richly articulated piers of Donato...
. The Palazzo Te in Mantua
Mantua
Mantua is a city and comune in Lombardy, Italy and capital of the province of the same name. Mantua's historic power and influence under the Gonzaga family, made it one of the main artistic, cultural and notably musical hubs of Northern Italy and the country as a whole...
, and the Palazzo Strozzi
Palazzo Strozzi
Palazzo Strozzi is a palace in Florence, Italy.-History:The construction of the palace begun in 1489 by Benedetto da Maiano, for Filippo Strozzi the Elder, a rival of the Medici who had returned to the city in November 1466 and desired the most magnificent palace to assert his family's continued...
in Florence
Florence
Florence is the capital city of the Italian region of Tuscany and of the province of Florence. It is the most populous city in Tuscany, with approximately 370,000 inhabitants, expanding to over 1.5 million in the metropolitan area....
are examples in which the entire facade is rusticated. In his Banqueting House
Banqueting House
In Tudor and Early Stuart English architecture a banqueting house is a separate building reached through pleasure gardens from the main residence, whose use is purely for entertaining. It may be raised for additional air or a vista, and it may be richly decorated, but it contains no bedrooms or...
, London (1619), Inigo Jones
Inigo Jones
Inigo Jones is the first significant British architect of the modern period, and the first to bring Italianate Renaissance architecture to England...
gave a lightly rusticated surface texture to emphasize the blocks on both storeys, and to unify them behind his orders of pilasters and columns.

The Mannerist
Mannerism
Mannerism is a period of European art that emerged from the later years of the Italian High Renaissance around 1520. It lasted until about 1580 in Italy, when a more Baroque style began to replace it, but Northern Mannerism continued into the early 17th century throughout much of Europe...
architect Sebastiano Serlio
Sebastiano Serlio
Sebastiano Serlio was an Italian Mannerist architect, who was part of the Italian team building the Palace of Fontainebleau...
and others of his generation enjoyed the play between rusticated and finished architectural elements. In the woodcut of a doorway from Serlio's 1537 treatise, the banded rustication of the wall is carried right across the attached column and the moldings of the doorway surround, binding together all the elements.

During the 18th century following the Palladian revival, rustication was widely used on the ground floors of large buildings, as its contrived appearance of simplicity and solidity contrasted well to the carved ornamental stonework and columns of the floors above. A ground floor with rustication, especially in an English mansion such as Kedleston Hall
Kedleston Hall
Kedleston Hall is an English country house in Kedleston, Derbyshire, approximately four miles north-west of Derby, and is the seat of the Curzon family whose name originates in Notre-Dame-de-Courson in Normandy...
is sometimes referred to as the "rustic floor", in order to distinguish it from the piano nobile
Piano nobile
The piano nobile is the principal floor of a large house, usually built in one of the styles of classical renaissance architecture...
above.

The appearance of rustication, creating a rough, unfinished stone-like suface, can be worked on a wooden exterior. This process became popular in 18th century New England to translate the features of Palladian architecture
Palladian architecture
Palladian architecture is a European style of architecture derived from the designs of the Venetian architect Andrea Palladio . The term "Palladian" normally refers to buildings in a style inspired by Palladio's own work; that which is recognised as Palladian architecture today is an evolution of...
to the house-carpenter's idiom: in Virginia Monticello
Monticello
Monticello is a National Historic Landmark just outside Charlottesville, Virginia, United States. It was the estate of Thomas Jefferson, the principal author of the United States Declaration of Independence, third President of the United States, and founder of the University of Virginia; it is...
and Mount Vernon
Mount Vernon (plantation)
Mount Vernon, located near Alexandria, Virginia, was the plantation home of the first President of the United States, George Washington. The mansion is built of wood in neoclassical Georgian architectural style, and the estate is located on the banks of the Potomac River.Mount Vernon was designated...
both made use of this technique. Mount Vernon in particular makes extensive use of feigned rustication and sanded paint and the original finished surfaces of several original planks still survive..

Rustication of a wooden exterior consists of three basic steps. First, the wood is cut, sanded and prepared with bevel
Bevel
A beveled edge refers to an edge of a structure that is not perpendicular to the faces of the piece. The words bevel and chamfer overlap in usage; in general usage they are often interchanged, while in technical usage they may sometimes be differentiated as shown in the image at right.-Cutting...
ed grooves that make each plank appear as if it were a series of stone blocks. Second, the wood is painted with a thick coat of paint. Third, while the paint is still wet, sand is thrown or air blasted onto the planks until no more sand will stick. After the paint dries the plank is ready for use.