Encyclopedia
Vilcabamba was a city founded by Manco Inca in 1539 and was the last refuge of the Inca Empire
Inca Empire
The Inca Empire, or Inka Empire , was the largest empire in pre-Columbian America. The administrative, political and military center of the empire was located in Cusco in modern-day Peru. The Inca civilization arose from the highlands of Peru sometime in the early 13th century...
until it fell to the Spaniards in 1572, signaling the end of Inca resistance to Spanish rule. 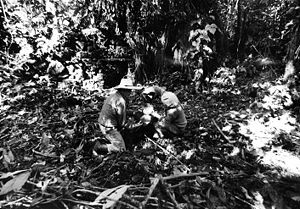 After the Incan empire fell
Spanish conquest of the Inca Empire
The Spanish conquest of the Inca Empire was one of the most important campaigns in the Spanish colonization of the Americas. This historic process of military conquest was made by Spanish conquistadores and their native allies....
, the city was burned and the area swiftly became a remote, secluded spot of Peru
Peru
Peru , officially the Republic of Peru , is a country in western South America. It is bordered on the north by Ecuador and Colombia, on the east by Brazil, on the southeast by Bolivia, on the south by Chile, and on the west by the Pacific Ocean....
. The location of Vilcabamba was forgotten.

The first outsiders in modern times to rediscover the remote forest site that has since come to be identified with Vilcabamba la Vieja were three Cuzqueños: Manuel Ugarte, Manuel Lopez Torres, and Juan Cancio Saavedra, in 1892. In 1911, Hiram Bingham
Hiram Bingham III
Hiram Bingham, formally Hiram Bingham III, was an academic, explorer, treasure hunter and politician from the United States. He made public the existence of the Quechua citadel of Machu Picchu in 1911 with the guidance of local indigenous farmers...
with his book Lost City of the Incas brought to public attention the site of the ruins of the city at the remote forest site 130 kilometres (80.8 mi) west of Cuzco
Cusco
Cusco , often spelled Cuzco , is a city in southeastern Peru, near the Urubamba Valley of the Andes mountain range. It is the capital of the Cusco Region as well as the Cuzco Province. In 2007, the city had a population of 358,935 which was triple the figure of 20 years ago...
(called Espíritu Pampa). Yet, Bingham did not realize its significance and believed that Machu Picchu
Machu Picchu
Machu Picchu is a pre-Columbian 15th-century Inca site located above sea level. It is situated on a mountain ridge above the Urubamba Valley in Peru, which is northwest of Cusco and through which the Urubamba River flows. Most archaeologists believe that Machu Picchu was built as an estate for...
was the fabled "Vilcabamba," lost city and last refuge of the Incas.

In the 1960s, the explorations and discoveries of Antonio Santander Casselli and Gene Savoy
Gene Savoy
Douglas Eugene "Gene" Savoy was an American explorer, author, religious leader, and theologian. He served as Head Bishop of the International Community of Christ, Church of the Second Advent from 1971 until his passing...
finally associated the Espíritu Pampa site with the legendary Vilcabamba. Their 1970 book Antisuyo brough the site to even wider attention. Researcher and author John Hemming provided additional substantive confirmation as to Espíritu Pampas significance in his 1970 The Conquest of the Incas.

In 1976 Professor Edmundo Guillen and Polish explorers Tony Halik
Tony Halik
Tony Halik, real name: Mieczysław Antoni Sędzimir Halik was a Polish traveller and explorer.Halik was born in Toruń, Poland....
and Elżbieta Dzikowska
Elzbieta Dzikowska
Elżbieta Dzikowska - , Polish art historian, sinologist, explorer, director and operator of documentary films, the author of many books, television programs, radio broadcasts, articles and exhibitions of contemporary art.Along with her husband, Tony Halik, has made about 300 documentary films all...
continued to explore the long-known ruins. However, before the expedition, Guillen visited a museum in Seville
Seville
Seville is the artistic, historic, cultural, and financial capital of southern Spain. It is the capital of the autonomous community of Andalusia and of the province of Seville. It is situated on the plain of the River Guadalquivir, with an average elevation of above sea level...
where he discovered letters from Spaniards, in which they were describing the progress of the invasion and what they found in Vilcabamba. Comparison between the letters' content and the ruins provided additional proof of the location of Vilcabamba.

Later extensive archeological work by Vincent Lee, and especially his exhaustive study, his 2000 book Forgotten Vilcabamba, gave further and even more precise confirmation that has made Espíritu Pampa the definitively accepted site of the historical Vilcabamba.

On June 16, 2006 a museum in Cuzco unveiled a plaque that commemorates the thirtieth anniversary of the 1976 Vilcabamba findings.

The lost city of Vilcabamba features in the educational computer game series The Amazon Trail
The Amazon Trail
The Amazon Trail is an educational computer game created by MECC. It was inspired by the popularity of The Oregon Trail, featuring the areas surrounding the Amazon River and some of its tributaries. In this 2-D adventure, the player is asked to set out on a journey down the Amazon, hoping to make...
, the Tomb Raider
Tomb Raider
Tomb Raider is an action-adventure video game developed by Core Design and published by Eidos Interactive. It was originally released in 1996 for the Sega Saturn, with MS-DOS and PlayStation versions following shortly thereafter...
videogame and its remake Tomb Raider: Anniversary, and the books Evil Star
Evil Star (novel)
Evil Star is the second book in The Power of Five series by British author Anthony Horowitz. It was published and released in the UK on April 1, 2006 by Walker Books Ltd and in the United States on June 1, 2006 by Scholastic Press under the adjusted series title, The Gatekeepers...
and Necropolis by British thriller author Anthony Horowitz
Anthony Horowitz
Anthony Craig Horowitz is an English novelist and screenwriter. He has written many children's novels, including The Power of Five, Alex Rider and The Diamond Brothers series and has written over fifty books. He has also written extensively for television, adapting many of Agatha Christie's...
. Vilcabamba is also a playable place in the PlayStation 2
PlayStation 2
The PlayStation 2 is a sixth-generation video game console manufactured by Sony as part of the PlayStation series. Its development was announced in March 1999 and it was first released on March 4, 2000, in Japan...
RPG
Role-playing game
A role-playing game is a game in which players assume the roles of characters in a fictional setting. Players take responsibility for acting out these roles within a narrative, either through literal acting, or through a process of structured decision-making or character development...
Shadow Hearts: From the New World
Shadow Hearts: From The New World
is a console role-playing game developed by Nautilus and published by XSEED Games in 2005. It is the third official game in the Shadow Hearts series....
.

Michael Wood's 2000 documentary series Conquistadors
Conquistadors (TV Series)
Conquistadors documentary tells the story of the Spanish expeditions that conquest of the Americas. In this 4-part series Michael Wood travels in the footsteps of the Spanish expeditions, from Amazonia to Lake Titicaca, and from the desserts of North Mexico to the heights of Macchu Picchu...
in the second episode visits the site of Vilcabamba in telling the story of the fall of the Inca and retreat of Manco and his followers to the remote region as the last surviving remnant of the empire.

The city was the location of British writer Colin Thubron
Colin Thubron
Colin Gerald Dryden Thubron, CBE is a British travel writer and novelist.In 2008, The Times ranked him 45th on their list of the 50 greatest postwar British writers. He is a contributor to The New York Review of Books, The Times, The Times Literary Supplement and The New York Times. His books...
's 2002 novel, To the Last City (2002), which was short-listed for the Man Booker Prize
Man Booker Prize
The Man Booker Prize for Fiction is a literary prize awarded each year for the best original full-length novel, written in the English language, by a citizen of the Commonwealth of Nations, Ireland, or Zimbabwe. The winner of the Man Booker Prize is generally assured of international renown and...
, and tells the story of a group of people who set off to explore the ruins of the Inca city in what has been described as a "Heart of Darkness narrative" in a "Marquezian setting."