Encyclopedia
A role-playing game is a game
Game
A game is structured playing, usually undertaken for enjoyment and sometimes used as an educational tool. Games are distinct from work, which is usually carried out for remuneration, and from art, which is more often an expression of aesthetic or ideological elements...
in which players assume the roles of character
Player character
A player character or playable character is a character in a video game or role playing game who is controlled or controllable by a player, and is typically a protagonist of the story told in the course of the game. A player character is a persona of the player who controls it. Player characters...
s in a fictional setting. Players take responsibility for acting out these roles within a narrative, either through literal acting
Acting
Acting is the work of an actor or actress, which is a person in theatre, television, film, or any other storytelling medium who tells the story by portraying a character and, usually, speaking or singing the written text or play....
, or through a process of structured decision-making or character development. Actions taken within many games succeed or fail according to a formal system of rules
Role-playing game system
A role-playing game system is a set of game mechanics used in a role-playing game to determine the outcome of a character's in-game actions...
and guidelines.

Despite this variety of forms, some game forms such as trading card games and wargames
Wargaming
A wargame is a strategy game that deals with military operations of various types, real or fictional. Wargaming is the hobby dedicated to the play of such games, which can also be called conflict simulations, or consims for short. When used professionally to study warfare, it is generally known as...
that are related to role-playing games may not be included. Role-playing activity may sometimes be present in such games, but it is not the primary focus. The term is also sometimes used to describe roleplay simulation games and exercises used in teaching, training, and academic research.

Both authors and major publishers of tabletop role-playing games consider them to be a form of interactive and collaborative storytelling
Storytelling
Storytelling is the conveying of events in words, images and sounds, often by improvisation or embellishment. Stories or narratives have been shared in every culture as a means of entertainment, education, cultural preservation and in order to instill moral values...
. Events, characters and narrative structure give a sense of a narrative experience, and the game need not have a strongly-defined storyline. Interactivity is the crucial difference between role-playing games and traditional fiction. Whereas a viewer of a television show is a passive observer, a player at a role-playing game makes choices that affect the story. Such role-playing games extend an older tradition of storytelling game
Storytelling game
A storytelling game is a game where two or more persons collaborate on telling a spontaneous story. Usually, each player takes care of one or more characters in the developing story...
s where a small party of friends collaborate to create a story.

While simple forms of role-playing exist in traditional children's game
Children's games (role play)
Cowboys and Indians is a very old childhood game, with roots extending further back than even the romanticized historical period from which it springs...
s of make believe, role-playing games add a level of sophistication and persistence to this basic idea with additions such as game facilitators and rules of interaction. Participants in a role-playing game will generate specific characters and an ongoing plot. A consistent system of rules and a more or less realistic campaign setting
Campaign setting
A campaign setting is usually a fictional world which serves as a setting for a role-playing game or wargame campaign. A campaign is a series of individual adventures, and a campaign setting is the world in which such adventures and campaigns take place...
in games aids suspension of disbelief
Suspension of disbelief
Suspension of disbelief or "willing suspension of disbelief" is a formula for justifying the use of fantastic or non-realistic elements in literary works of fiction...
. The level of realism
Realism (arts)
Realism in the visual arts and literature refers to the general attempt to depict subjects "in accordance with secular, empirical rules", as they are considered to exist in third person objective reality, without embellishment or interpretation...
in games ranges from just enough internal consistency to set up a believable story or credible challenge up to full-blown simulations of real-world processes.

Role-playing games are played in a wide variety of media ranging from the spoken tabletop form, to physically acting out characters in LARP or playing characters virtually in digital media. There is also a great variety of systems of rules and game settings. Games that emphasize plot and character interaction over game mechanics and combat sometimes prefer the name storytelling game
Storytelling game
A storytelling game is a game where two or more persons collaborate on telling a spontaneous story. Usually, each player takes care of one or more characters in the developing story...
. These types of games tend to minimize or altogether eliminate the use of dice or other randomizing elements. Some games are played with characters created before the game by the GM, rather than those created by the players. This type of game is typically played at gaming convention
Gaming convention
A gaming convention is a gathering that centered on role-playing games, collectible card games, miniatures wargames, board games, video games, or other types of games. These conventions are typically two or three days long, and often held at either a university or in a convention center hotel...
s, or in standalone games that do not form part of a campaign.

Tabletop or pen-and-paper (PnP) RPGs are conducted through discussion in a small social gathering. The GM describes the game world and its inhabitants. The other players describe the intended actions of their characters, and the GM describes the outcomes. Some outcomes are determined by the game system, and some are chosen by the GM.

This is the format in which role-playing games were first popularized. The first commercially available RPG, Dungeons & Dragons
Dungeons & Dragons
Dungeons & Dragons is a fantasy role-playing game originally designed by Gary Gygax and Dave Arneson, and first published in 1974 by Tactical Studies Rules, Inc. . The game has been published by Wizards of the Coast since 1997...
(D&D), was inspired by fantasy literature
Fantasy literature
Fantasy literature is fantasy in written form. Historically speaking, literature has composed the majority of fantasy works. Since the 1950s however, a growing segment of the fantasy genre has taken the form of films, television programs, graphic novels, video games, music, painting, and other...
and the wargaming
Wargaming
A wargame is a strategy game that deals with military operations of various types, real or fictional. Wargaming is the hobby dedicated to the play of such games, which can also be called conflict simulations, or consims for short. When used professionally to study warfare, it is generally known as...
hobby and was published in 1974. The popularity of D&D led to the birth of the tabletop role-playing game industry, which publishes games with a wide variety of themes, rules, and styles of play.

This format is often referred to simply as a role-playing game. To distinguish this form of RPG from other formats, the retronym
Retronym
A retronym is a type of neologism that provides a new name for an object or concept to differentiate the original form or version of it from a more recent form or version. The original name is most often augmented with an adjective to account for later developments of the object or concept itself...
s tabletop role-playing game or pen and paper role-playing game are sometimes used, though neither a table nor pen and paper are strictly necessary.

A LARP is played more like improvisational theatre
Improvisational theatre
Improvisational theatre takes many forms. It is best known as improv or impro, which is often comedic, and sometimes poignant or dramatic. In this popular, often topical art form improvisational actors/improvisers use improvisational acting techniques to perform spontaneously...
. Participants act out their characters' actions instead of describing them, and the real environment is used to represent the imaginary setting of the game world. Players are often costumed as their characters and use appropriate props, and the venue may be decorated to resemble the fictional setting. Some live action role-playing games use rock-paper-scissors
Rock-paper-scissors
Rock-paper-scissors is a hand game played by two people. The game is also known as roshambo, or another ordering of the three items ....
or comparison of attributes to resolve conflicts symbolically, while other LARPs use physical combat with simulated arms such as airsoft guns or foam weapons.

LARPs vary in size from a handful of players to several thousand, and in duration from a couple of hours to several days. Because the number of players in a LARP is usually larger than in a tabletop role-playing game, and the players may be interacting in separate physical spaces, there is typically less of an emphasis on tightly maintaining a narrative or directly entertaining the players, and game sessions are often managed in a more distributed manner.

Tabletop role-playing games have been translated into a variety of electronic formats. As early as 1974, the same year as the release of Dungeons & Dragons, unlicensed versions of it were developed on mainframe university systems under titles such as dnd and Dungeon. These early computer RPGs influenced all of electronic gaming, as well as spawning the role-playing video game genre. Some authors divide digital role-playing games into two intertwined groups: single player games using RPG-style mechanics, and multiplayer games incorporating social interaction.

Single player role-playing video games form a loosely defined genre of computer and console games with origins in role-playing games such as Dungeons & Dragons, on which they base much of their terminology, settings and game mechanics. This translation changes the experience of the game, providing a visual representation of the world but emphasizing statistical character development over collaborative, interactive storytelling. 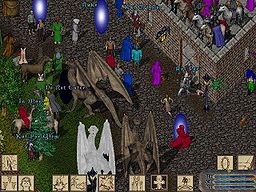 Massively multi-player online role-playing games (MMORPGs) combine the large-scale social interaction and persistent world
Persistent world
A persistent world is a virtual world that continues to exist even after a user exits the world and that user-made changes to its state are, to some extent, permanent...
of MUDs with graphic interfaces. Most MMORPGs do not actively promote in-character role-playing, however players can use the games' communication functions to role-play so long as other players cooperate. The majority of players in MMORPGs do not engage in role-play in this sense.

One common feature of many RPGs is the role of gamemaster, a participant who has special duties to present the fictional setting, arbitrate the results of character actions, and maintain the narrative flow. In tabletop and live action RPGs the GM performs these duties in person. In video RPGs many of the functions of a GM are fulfilled by the game engine
Game engine
A game engine is a system designed for the creation and development of video games. There are many game engines that are designed to work on video game consoles and personal computers...
, however some multi-player video RPGs also allow for a participant to take on a GM role through a visual interface called a GM toolkit, albeit with abilities limited by the available technology.