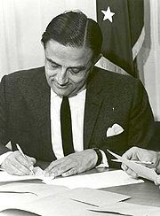 The center had its beginnings as the Thumba Equatorial Rocket Launching Station
Thumba Equatorial Rocket Launching Station
The Thumba Equatorial Rocket Launching Station is an Indian spaceport, operated by the Indian Space Research Organization. It is located in Thumba, Thiruvananthapuram which is near the southern tip of India, very close to earth's magnetic equator...
(TERLS) in 1962. It was renamed in honor of Dr. Vikram Sarabhai
Vikram Sarabhai
Vikram Ambalal Sarabhai was an Indian physicist. He is considered to be the father of the Indian space program; legendary Homi Bhabha’s successor as chairman of the Atomic Energy Commission; and was as at home in the world of the arts as in his favourite laboratory. His interests were vast and...
, the father of the Indian space program. VSSC is surrounded by the villages of Veli to the south, Kulathoor to east, and Pallithura to the north.

The Vikram Sarabhai Space Center is one of the main Research & Development establishments within ISRO. VSSC is an entirely indigenous facility working on the development of sounding rockets; Rohini and Menaka launchers; ASLV
ASLV
Augmented Satellite Launch Vehicle , was a 5-stage solid propellant rocket developed by the Indian Space Research Organisation to place 150 kg satellites into LEO. This project was started by India during the early 1980s to develop technologies needed for a payload to be placed into a...
, PSLV and GSLV, along with the solid-fuel motor program.

Vikram Sarabhai Space Centre (VSSC) is the largest of ISRO facilities. It is a center for the development of satellite launch vehicles and associated technologies. The centre pursues research and development in a host of distinct technology domains including Aeronautics
Aeronautics
Aeronautics is the science involved with the study, design, and manufacturing of airflight-capable machines, or the techniques of operating aircraft and rocketry within the atmosphere...
, Avionics
Avionics
Avionics are electronic systems used on aircraft, artificial satellites and spacecraft.Avionic systems include communications, navigation, the display and management of multiple systems and the hundreds of systems that are fitted to aircraft to meet individual roles...
, Composites
Composite material
Composite materials, often shortened to composites or called composition materials, are engineered or naturally occurring materials made from two or more constituent materials with significantly different physical or chemical properties which remain separate and distinct at the macroscopic or...
, etc. primarily for the purpose of advancing launch vehicle technology.

November 21, 1963 marked India's first venture into space, with the launch of a two-stage Nike Apache
Nike Apache
The Nike Apache was a two-stage sounding rocket used by NASA to loft instruments into the upper atmosphere. The Nike Apache was launched 636 times between 1961 and 1978...
sounding rocket
Sounding rocket
A sounding rocket, sometimes called a research rocket, is an instrument-carrying rocket designed to take measurements and perform scientific experiments during its sub-orbital flight. The origin of the term comes from nautical vocabulary, where to sound is to throw a weighted line from a ship into...
from TERLS. The first rockets launched were built in United States
United States
The United States of America is a federal constitutional republic comprising fifty states and a federal district...
.

Over the years VSSC has designed, developed and launched a family of sounding rockets under the generic name, Rohini Sounding Rockets (RSR) to serve a range of scientific missions. The currently operational Rohini Sounding Rockets are RH-200, RH-300, RH-560 and their different versions. These sounding rockets are launched for carrying out research in areas like meteorology and upper atmospheric processes up to an altitude of about 500 km.

TERLS was formally dedicated to the United Nations
United Nations
The United Nations is an international organization whose stated aims are facilitating cooperation in international law, international security, economic development, social progress, human rights, and achievement of world peace...
on February 02, 1968 by then Prime Minister of India
Prime Minister of India
The Prime Minister of India , as addressed to in the Constitution of India — Prime Minister for the Union, is the chief of government, head of the Council of Ministers and the leader of the majority party in parliament...
, Mrs. Indira Gandhi
Indira Gandhi
Indira Priyadarshini Gandhara was an Indian politician who served as the third Prime Minister of India for three consecutive terms and a fourth term . She was assassinated by Sikh extremists...
. Although no direct funding from the UN was involved, scientists from several countries including USA, Russia
Russia
Russia or , officially known as both Russia and the Russian Federation , is a country in northern Eurasia. It is a federal semi-presidential republic, comprising 83 federal subjects...
(former USSR), France
France
The French Republic , The French Republic , The French Republic , (commonly known as France , is a unitary semi-presidential republic in Western Europe with several overseas territories and islands located on other continents and in the Indian, Pacific, and Atlantic oceans. Metropolitan France...
, Japan
Japan
Japan is an island nation in East Asia. Located in the Pacific Ocean, it lies to the east of the Sea of Japan, China, North Korea, South Korea and Russia, stretching from the Sea of Okhotsk in the north to the East China Sea and Taiwan in the south...
, Germany
Germany
Germany , officially the Federal Republic of Germany , is a federal parliamentary republic in Europe. The country consists of 16 states while the capital and largest city is Berlin. Germany covers an area of 357,021 km2 and has a largely temperate seasonal climate...
and UK continue to utilize the TERLS facility for conducting rocket based experiments. Over 1161 USSR meteorological sounding rockets called M-100 were launched from TERLS every week from 1970 until 1993.

After the sudden demise of Dr. Vikram Sarabhai on December 30, 1971, TERLS and associated space establishments at Thiruvananthapuram were renamed as the Vikram Sarabhai Space Centre in his honour.

In addition to its main campus located at Thumba and Veli, VSSC has integration and checkout facilities located at Valiamala. Facilities for development of reinforced plastics and composites are located at Vattiyoorkavu in Thiruvananthapuram. An experimental plant in Aluva produces ammonium perchlorate
Ammonium perchlorate
Ammonium perchlorate is an inorganic compound with the formula NH4ClO4. It is the salt of perchloric acid and ammonia. It is a powerful oxidizer, which is why its main use is in solid propellants...
, a vital ingredient for solid propellant motors. TERLS and the Space Physics Laboratory (SPL) are also within the VSSC campus. SPL focuses on research activities in disciplines such as surface boundary level physics, atmospheric aerosols, chemistry of radiation, atmospheric dynamics, etc.

VSSC has a large workforce of about 4500 employees, most of them specialists in frontier disciplines.

Over the last four decades VSSC has become the leading centre for development of launch vehicle technology.

VSSC is certified for compliance to ISO 9001:2000 quality management system. The quality objectives of the Centre are planning, implementing and maintaining a quality system during design, development, production, and operation of subsystems and systems for launch vehicles. It also aims at achieving continued improvement in process for its zero defect goal.

ISRO has developed an array of sounding rockets and four generations of launch vehicles and thus establishing operational space transportation system. Most of launch vehicle development is carried out at VSSC.

VSSC made significant contribution to India's maiden mission to the Moon, Chandrayaan-1.

VSSC R&D efforts have included solid propellant formulations. Another focus area has been navigation systems; the ISRO Inertial Systems Unit (IISU) established at Vattiyoorkavu is a part of VSCC.

VSSC is involved in the development of air-breathing vehicles. A reusable launch vehicle technology demonstrator is under development, which will be tested soon.

VSSC also has programs focused on applications of space technology including village resource centres, telemedicine
Telemedicine
Telemedicine is the use of telecommunication and information technologies in order to provide clinical health care at a distance. It helps eliminate distance barriers and can improve access to medical services that would often not be consistently available in distant rural communities...
, tele-education, disaster management support and outreach through Direct To Home television broadcast.
The source of this article is wikipedia, the free encyclopedia.  The text of this article is licensed under the GFDL.