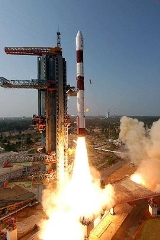 Encyclopedia
The Polar Satellite Launch Vehicle , commonly known by its abbreviation PSLV, is an expendable launch system
Expendable launch system
An expendable launch system is a launch system that uses an expendable launch vehicle to carry a payload into space. The vehicles used in expendable launch systems are designed to be used only once , and their components are not recovered for re-use after launch...
developed and operated by the Indian Space Research Organisation
Indian Space Research Organisation
The Indian Space Research Organisation is an independent Indian governmental agency established in 1969 for the research and development of vehicles and activities for the exploration of space within and outside of Earth’s atmosphere. Headquartered in Bangalore...
(ISRO). It was developed to allow India
India
India , officially the Republic of India , is a country in South Asia. It is the seventh-largest country by geographical area, the second-most populous country with over 1.2 billion people, and the most populous democracy in the world...
to launch its Indian Remote Sensing
Indian Remote Sensing satellite
Indian Remote Sensing satellites are a series of Earth Observation satellites, built, launched and maintained by Indian Space Research Organisation...
(IRS) satellites into sun synchronous orbits, a service that was, until the advent of the PSLV, commercially viable only from Russia
Russia
Russia or , officially known as both Russia and the Russian Federation , is a country in northern Eurasia. It is a federal semi-presidential republic, comprising 83 federal subjects...
. PSLV can also launch small size satellites into geostationary transfer orbit
Geostationary transfer orbit
A geosynchronous transfer orbit or geostationary transfer orbit is a Hohmann transfer orbit used to reach geosynchronous or geostationary orbit....
(GTO). The PSLV has launched 41 satellites (19 Indian and 22 from other countries) into a variety of orbits to date.

After some delays, the PSLV had its first launch on 20 September 1993. Although all main engines performed as expected, an altitude control problem was reported in the second and third stages. After this initial setback, ISRO met complete success with the third developmental launch in 1996. Further successful launches followed in 1997, 1999, and 2001.

PSLV continues to be the work horse of Indian satellite launches, especially for LEO satellites. It has undergone several improvements with each subsequent version, especially those involving thrust, efficiency as well as weight.

The PSLV has four stages using solid and liquid propulsion systems alternately. The first stage is one of the largest solid-fuel rocket boosters in the world and carries 138 tonnes of Hydroxyl-terminated polybutadiene
Hydroxyl-terminated polybutadiene
Hydroxyl-terminated polybutadiene is a polymer of butadiene terminated at each end with a hydroxyl functional group. It reacts with diisocyanate to form polyurethane, a stable and easily stored synthetic material....
(HTPB) bound propellant with a diameter of 2.8 m. The motor case is made of maraging steel
Maraging steel
Maraging steels are steels which are known for possessing superior strength and toughness without losing malleability, although they cannot hold a good cutting edge. Aging refers to the extended heat-treatment process...
. The booster develops a maximum thrust of about 4,430 kN. Six strap-on motors, four of which are ignited on the ground, augment the first stage thrust. Each of these solid propellant strap-on motors carries nine tonnes of HTPB propellant and produces 677 kN thrust. Pitch and yaw control of the PSLV during the thrust phase of the solid motor is achieved by injection of an aqueous solution of strontium
Strontium
Strontium is a chemical element with the symbol Sr and the atomic number 38. An alkaline earth metal, strontium is a soft silver-white or yellowish metallic element that is highly reactive chemically. The metal turns yellow when exposed to air. It occurs naturally in the minerals celestine and...
perchlorate in the nozzle to constitute Secondary Injection Thrust Vector Control System (SITVC). The injection is stored in two cylindrical aluminum tanks strapped to the solid rocket motor and pressurized with nitrogen. There are two additional small liquid engine control power plants in the first stage, the Roll Control Thrusters (RCT), fixed radially opposite one on each side, between the triplet set of strap-on boosters. RCT is used for roll
Roll program
A roll program or tilt maneuver is an aerodynamic maneuver that alters the attitude of a vertically-launched space launch vehicle. The maneuver is used to place the spacecraft on a proper heading toward its intended orbit....
control during the first stage and the SITVC in two strap-on motors is for roll control augmentation.

The third stage uses 7 tonnes of HTPB-based solid propellant and produces a maximum thrust of 324 kN. It has a Kevlar-polyamide fiber case and a submerged nozzle equipped with a flex-bearing-seal gimbaled nozzle (±2°) thrust-vector engine for pitch & yaw control. For roll control it uses the RCS (Reaction Control System) of fourth stage.

The fourth and the terminal stage of PSLV has a twin engine configuration using liquid propellant. With a propellant loading of 2 tonnes (Mono-Methyl Hydrazine as fuel + Mixed Oxides of Nitrogen as oxidiser), each of these engines generates a maximum thrust of 7.4 kN. Engine is gimbaled (±3°) for pitch, yaw & roll control and for control during the coast phase uses on-off RCS. PSLV-C4 used a new lightweight carbon composite payload adapter to enable a greater GTO payload capability.

PSLV is developed with a group of wide-range control units.

ISRO has envisaged a number of variants of PSLV to cater to different mission requirements. There are currently three operational versions of the PSLV — the standard (PSLV), the core-alone (PSLV-CA) without the six strap-on booster motors, and the (PSLV-XL) version, which carries more solid fuel in its strap-on motors than the standard version. All the three versions have proved to be unalloyed successes. These configurations provide wide variations in payload capabilities ranging from 600 kg in LEO to 1900 kg in sun synchronous orbit
Sun-synchronous orbit
A Sun-synchronous orbit is a geocentric orbit which combines altitude and inclination in such a way that an object on that orbit ascends or descends over any given point of the Earth's surface at the same local mean solar time. The surface illumination angle will be nearly the same every time...
.

The standard version of the PSLV has four stages using solid and liquid propulsion systems alternately and six strap-on boosters. It currently has capability to launch 1,678 kg to 622 km into sun synchronous orbit.

The PSLV-CA, CA meaning "Core Alone", model premiered on April 23, 2007. The CA model does not include the six strap-on boosters used by the PSLV standard variant. Two small roll control modules and two first stage motor control injection tanks were still attached to the side of the first stage. The fourth stage of the CA variant has 400 kg less propellant when compared to its standard version. It currently has capability to launch 1,100 kg to 622 km sun synchronous orbit.

PSLV-XL is the uprated version of Polar Satellite Launch Vehicle in its standard configuration boosted by more powerful, stretched strap-on boosters. Weighing 320 tonnes at lift-off, the vehicle uses larger strap-on motors (PSOM-XL) to achieve higher payload capability. PSOM-XL uses larger 13.5m, 12 tonnes of solid propellants instead of 9 tonnes used in the earlier configuration of PSLV. On 29 December 2005, ISRO successfully tested the improved version of strap-on booster for the PSLV. The first version of PSLV-XL was the launch of Chandrayaan-1 by PSLV-C11. The payload capability for this variant is 1800 kg compared to 1600 kg for the other variants. Future launches include the RISAT
RISAT
RISAT is a series of Indian radar imaging reconnaissance satellites built by ISRO. They provide all-weather surveillance using synthetic aperture radars ....
Radar Imaging Satellite.


PSLV-HP (Under development / Proposed)
As reported on the website of The New Indian Express
The New Indian Express
The New Indian Express is an Indian English-language broadsheet daily newspaper published by the Express Publications. It was founded in 1932 as the Indian Express, under the ownership of Chennai-based P. Varadarajulu Naidu. In 1991, following the death of the then owner Ramnath Goenka, the Goenka...
newspaper (April 26, 2007), PSLV project director N Narayanamoorthy spoke of another version being planned called the PSLV-HP, standing for ‘high performance.’ It will have improved strap-ons motors, and the payload capability will be raised to 2000 kg. The HP version will be used to launch a constellation of seven navigation satellites between 2010 and 2012. Among other things, the efficiency of the stage 4 engine will be improved in this version.

PSLV-3S (Under development / Proposed)
ISRO is also considering the development of a three-stage version of the rocket without six strap-on boosters (with the second stage of the four-stage version removed) which will be capable of placing 500 kg to LEO
Low Earth orbit
A low Earth orbit is generally defined as an orbit within the locus extending from the Earth’s surface up to an altitude of 2,000 km...
.