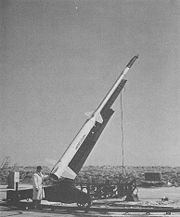 The Nike Tomahawk was a two stage American
United States
The United States of America is a federal constitutional republic comprising fifty states and a federal district...
sounding rocket
Sounding rocket
A sounding rocket, sometimes called a research rocket, is an instrument-carrying rocket designed to take measurements and perform scientific experiments during its sub-orbital flight. The origin of the term comes from nautical vocabulary, where to sound is to throw a weighted line from a ship into...
. The first stage was a Nike
Project Nike
Project Nike was a U.S. Army project, proposed in May 1945 by Bell Laboratories, to develop a line-of-sight anti-aircraft missile system. The project delivered the United States' first operational anti-aircraft missile system, the Nike Ajax, in 1953...
rocket, the second a Tomahawk
TE-416 Tomahawk
The TE-416 Tomahawk is a rocket developed by the American company Thiokol at the beginning of the 1960s for Sandia National Laboratories. Although the TE-416 Tomahawk can be launched alone, it was started predominantly as upper stage in connection with other rockets, for example with a Nike rocket...
rocket.