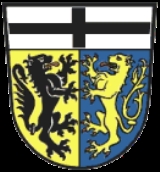 Encyclopedia
Viersen is a Kreis in the west of North Rhine-Westphalia
North Rhine-Westphalia
North Rhine-Westphalia is the most populous state of Germany, with four of the country's ten largest cities. The state was formed in 1946 as a merger of the northern Rhineland and Westphalia, both formerly part of Prussia. Its capital is Düsseldorf. The state is currently run by a coalition of the...
, Germany
Germany
Germany , officially the Federal Republic of Germany , is a federal parliamentary republic in Europe. The country consists of 16 states while the capital and largest city is Berlin. Germany covers an area of 357,021 km2 and has a largely temperate seasonal climate...
. Neighboring districts are Cleves, Wesel
Wesel (district)
Wesel is a Kreis in the northwestern part of North Rhine-Westphalia, Germany. Neighboring districts are Borken, Recklinghausen, district-free cities Bottrop, Oberhausen, Duisburg and Krefeld, districts Viersen, Cleves.-History:...
, district-free Krefeld
Krefeld
Krefeld , also known as Crefeld until 1929, is a city in North Rhine-Westphalia, Germany. It is located northwest of Düsseldorf, its centre lying just a few kilometres to the west of the River Rhine; the borough of Uerdingen is situated directly on the Rhine...
, Neuss, district-free Mönchengladbach
Mönchengladbach
Mönchengladbach , formerly known as Münchengladbach, is a city in North Rhine-Westphalia, Germany. It is located west of the Rhine half way between Düsseldorf and the Dutch border....
, Heinsberg
Heinsberg (district)
Heinsberg is a Kreis in the west of North Rhine-Westphalia, Germany. Neighboring districts are Viersen, district-free city Mönchengladbach, Neuss, Düren and Aachen, and also the Dutch province Limburg.-History:...
and the Dutch
Netherlands
The Netherlands is a constituent country of the Kingdom of the Netherlands, located mainly in North-West Europe and with several islands in the Caribbean. Mainland Netherlands borders the North Sea to the north and west, Belgium to the south, and Germany to the east, and shares maritime borders...
province of Limburg
Limburg (Netherlands)
Limburg is the southernmost of the twelve provinces of the Netherlands. It is located in the southeastern part of the country and bordered by the province of Gelderland to the north, Germany to the east, Belgium to the south and part of the west, andthe Dutch province of North Brabant partly to...
.

In 1816, the new Prussia
Prussia
Prussia was a German kingdom and historic state originating out of the Duchy of Prussia and the Margraviate of Brandenburg. For centuries, the House of Hohenzollern ruled Prussia, successfully expanding its size by way of an unusually well-organized and effective army. Prussia shaped the history...
n government created the district of Kempen. Originally belonging to the Regierungsbezirk
Regierungsbezirk
In Germany, a Government District, in German: Regierungsbezirk – is a subdivision of certain federal states .They are above the Kreise, Landkreise, and kreisfreie Städte...
Kleve, it was dissolved in 1822, and since then has belonged to Düsseldorf
Düsseldorf (region)
Düsseldorf is one of the five Regierungsbezirke of North Rhine-Westphalia, Germany, located in the north-west of the country. It covers the western part of the Ruhr Area, as well as the Niederrheinische Tiefebene, the lower Rhine area. It is the most populated of all German administrative areas of...
. In 1929 the district was enlarged significantly and renamed Kempen-Krefeld.

In 1975 the district again changed its borders and was renamed Viersen even though Kempen remained the capital. Viersen city
Viersen
Viersen is the capital of the district of Viersen, in North Rhine-Westphalia, Germany.-Geography:Viersen is situated approximately 8 km north-west of Mönchengladbach, 15 km south-west of Krefeld and 20 km east of Venlo ....
replaced Kempen as the capital in 1984.

The district Viersen has been twinned with

The district is located in the lowlands between the Rhine and the Meuse
Meuse River
The Maas or Meuse is a major European river, rising in France and flowing through Belgium and the Netherlands before draining into the North Sea...
river. Highest elevation is at Süchtelner Höhen with 90.7 m, with the lowest at Pielbruch with 28.6 m.