Encyclopedia
Kaniv is a city located in the Cherkasy Oblast
Cherkasy Oblast
Cherkasy Oblast is an oblast of central Ukraine located along the Dnieper River. The administrative center of the oblast is the city of Cherkasy).-Geography:...
(province
Oblast
Oblast is a type of administrative division in Slavic countries, including some countries of the former Soviet Union. The word "oblast" is a loanword in English, but it is nevertheless often translated as "area", "zone", "province", or "region"...
) in central Ukraine
Ukraine
Ukraine is a country in Eastern Europe. It has an area of 603,628 km², making it the second largest contiguous country on the European continent, after Russia...
. The city rests on the Dnieper River
Dnieper River
The Dnieper River is one of the major rivers of Europe that flows from Russia, through Belarus and Ukraine, to the Black Sea.The total length is and has a drainage basin of .The river is noted for its dams and hydroelectric stations...
, and is also one of the main inland river ports on the Dnieper. The current estimated population is 26,426 (as of 2005).

Kaniv is the administrative center of the Kanivskyi Raion (district
Raion
A raion is a type of administrative unit of several post-Soviet countries. The term, which is from French rayon 'honeycomb, department,' describes both a type of a subnational entity and a division of a city, and is commonly translated in English as "district"...
). However, the city is a city of oblast subordinance
Administrative divisions of Ukraine
Ukraine is subdivided into 24 oblasts , one autonomous republic, and two "cities with special status".- Overview :...
, thus being subject directly to the oblast authorities rather to the raion administration housed within the city itself. 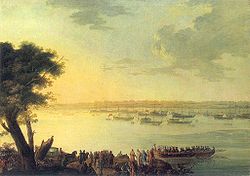 The town was first mentioned in a chronicle of 1149, although some believe that it had been founded as early as the 10th century; its name is derived from the personal nickname Kanya ('buzzard'). In the Middle Ages
Middle Ages
The Middle Ages is a periodization of European history from the 5th century to the 15th century. The Middle Ages follows the fall of the Western Roman Empire in 476 and precedes the Early Modern Era. It is the middle period of a three-period division of Western history: Classic, Medieval and Modern...
it was located on the Road from Varangians to Greeks. Initially part of Kievan Rus'
Kievan Rus'
Kievan Rus was a medieval polity in Eastern Europe, from the late 9th to the mid 13th century, when it disintegrated under the pressure of the Mongol invasion of 1237–1240....
, in the fourteenth century it was annexed by the Grand Duchy of Lithuania
Grand Duchy of Lithuania
The Grand Duchy of Lithuania was a European state from the 12th /13th century until 1569 and then as a constituent part of Polish-Lithuanian Commonwealth until 1791 when Constitution of May 3, 1791 abolished it in favor of unitary state. It was founded by the Lithuanians, one of the polytheistic...
. It was sacked by the Ottoman Turks
Ottoman Empire
The Ottoman EmpireIt was usually referred to as the "Ottoman Empire", the "Turkish Empire", the "Ottoman Caliphate" or more commonly "Turkey" by its contemporaries...
in 1458.

In 1569, Kaniv came under the rule of Poland
Poland
Poland , officially the Republic of Poland , is a country in Central Europe bordered by Germany to the west; the Czech Republic and Slovakia to the south; Ukraine, Belarus and Lithuania to the east; and the Baltic Sea and Kaliningrad Oblast, a Russian exclave, to the north...
, and it was also one of the centers of Cossack
Cossack
Cossacks are a group of predominantly East Slavic people who originally were members of democratic, semi-military communities in what is today Ukraine and Southern Russia inhabiting sparsely populated areas and islands in the lower Dnieper and Don basins and who played an important role in the...
culture and military life. In 1600, it received the Magdeburg Rights
Magdeburg rights
Magdeburg Rights or Magdeburg Law were a set of German town laws regulating the degree of internal autonomy within cities and villages granted by a local ruler. Modelled and named after the laws of the German city of Magdeburg and developed during many centuries of the Holy Roman Empire, it was...
, but the city's prosperity was halted by successive plagues, fires, and Cossack unrest. During The Deluge
The Deluge (Polish history)
The term Deluge denotes a series of mid-17th century campaigns in the Polish–Lithuanian Commonwealth. In a wider sense it applies to the period between the Khmelnytsky Uprising of 1648 and the Truce of Andrusovo in 1667, thus comprising the Polish–Lithuanian theaters of the Russo-Polish and...
the town was captured by the forces of Bohdan Khmelnytsky
Bohdan Khmelnytsky
Bohdan Zynoviy Mykhailovych Khmelnytsky was a hetman of the Zaporozhian Cossack Hetmanate of Polish–Lithuanian Commonwealth . He led an uprising against the Commonwealth and its magnates which resulted in the creation of a Cossack state...
in 1648. In 1768, it was captured by one of the leaders of the Koliyivschyna
Koliyivschyna
Koliyivshchyna 1768-1769 was a Ukrainian Cossack and peasant rebellion against Poland, which was responsible for the murder of noblemen , Jews, Uniates, and Catholic priests across the part of the country west of the Dnieper river...
, Maksym Zalizniak
Maksym Zalizniak
Maksym Zaliznyak - Zaporizhian Cossack, leader of the Koliivshchyna rebellion.-History:Zaliznyak was born in a poor peasant family...
. As an effect of a pogrom
Pogrom
A pogrom is a form of violent riot, a mob attack directed against a minority group, and characterized by killings and destruction of their homes and properties, businesses, and religious centres...
, most of the local szlachta
Szlachta
The szlachta was a legally privileged noble class with origins in the Kingdom of Poland. It gained considerable institutional privileges during the 1333-1370 reign of Casimir the Great. In 1413, following a series of tentative personal unions between the Grand Duchy of Lithuania and the Kingdom of...
and Jews
Jews
The Jews , also known as the Jewish people, are a nation and ethnoreligious group originating in the Israelites or Hebrews of the Ancient Near East. The Jewish ethnicity, nationality, and religion are strongly interrelated, as Judaism is the traditional faith of the Jewish nation...
were killed. Following the Second Partition of Poland
Partitions of Poland
The Partitions of Poland or Partitions of the Polish–Lithuanian Commonwealth took place in the second half of the 18th century and ended the existence of the Polish–Lithuanian Commonwealth, resulting in the elimination of sovereign Poland for 123 years...
the town with large parts of other territories came under the control of the Russian Empire
Russian Empire
The Russian Empire was a state that existed from 1721 until the Russian Revolution of 1917. It was the successor to the Tsardom of Russia and the predecessor of the Soviet Union...
. In 1787, Kaniów was visited by Catherine II
Catherine II of Russia
Catherine II, also known as Catherine the Great , Empress of Russia, was born in Stettin, Pomerania, Prussia on as Sophie Friederike Auguste von Anhalt-Zerbst-Dornburg...
. She met there with Polish king Stanisław August Poniatowski.

During the later stages of the Great War
World War I
World War I , which was predominantly called the World War or the Great War from its occurrence until 1939, and the First World War or World War I thereafter, was a major war centred in Europe that began on 28 July 1914 and lasted until 11 November 1918...
, on May 11, 1918, the town was the seat of the Battle of Kaniów
Battle of Kaniów
Battle of Kaniów took place during World War I on the night of 10–11 May 1918 near Kaniv between the Polish II Corps in Russia under general Józef Haller de Hallenburg and the German Imperial Army under general Zierhold...
, in which the forces of the 2nd Polish Corps and the Polish Legions
Polish Legions in World War I
Polish Legions was the name of Polish armed forces created in August 1914 in Galicia. Thanks to the efforts of KSSN and the Polish members of the Austrian parliament, the unit became an independent formation of the Austro-Hungarian Army...
under Józef Haller de Hallenburg
Józef Haller de Hallenburg
Józef Haller de Hallenburg was a Lieutenant General of the Polish Army, legionary in Polish Legions, harcmistrz , the President of The Polish Scouting and Guiding Association , political and social activist, Stanisław Haller de Hallenburg's cousin.Haller was born in Jurczyce...
failed to break through the Austro-German lines to the Russian side. During the Second World War, Kaniv was a site of tragically unsuccessful drop of Soviet paratrooper
Paratrooper
Paratroopers are soldiers trained in parachuting and generally operate as part of an airborne force.Paratroopers are used for tactical advantage as they can be inserted into the battlefield from the air, thereby allowing them to be positioned in areas not accessible by land...
s.

In 1978, Oleksa Hirnyk
Oleksa Hirnyk
Oleksa Mykolajovyč Hirnyk was a Ukrainian Soviet dissident, an engineer by profession, who burned himself to death as an act of protest against Soviet suppression of the Ukrainian language, culture and history...
burned himself to death in protest of Russification
Russification
Russification is an adoption of the Russian language or some other Russian attributes by non-Russian communities...
in Kaniv, on a hill near Shevchenko's tomb. In 2007, he was honored as a Hero of Ukraine
Hero of Ukraine
Hero of Ukraine is the highest state decoration that can be conferred upon an individual citizen by the Government of Ukraine. The title was created in 1998 by President Leonid Kuchma and as of August 25 2011 the total number of awards is 265. The award is divided into two classes of distinction:...
.

Kaniv is twinned
Town twinning
Twin towns and sister cities are two of many terms used to describe the cooperative agreements between towns, cities, and even counties in geographically and politically distinct areas to promote cultural and commercial ties.- Terminology :...
with:
The source of this article is wikipedia, the free encyclopedia.  The text of this article is licensed under the GFDL.