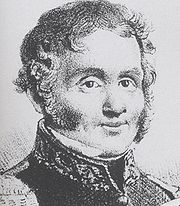 Vicente Filisola (b. ca. 1789, Ravello
Ravello
Ravello is a town and comune situated above the Amalfi Coast in the province of Salerno, Campania, southern Italy, with has approximately 2,500 inhabitants. It is a popular tourist destination.-History:...
, Italy
Italy
Italy , officially the Italian Republic languages]] under the European Charter for Regional or Minority Languages. In each of these, Italy's official name is as follows:;;;;;;;;), is a unitary parliamentary republic in South-Central Europe. To the north it borders France, Switzerland, Austria and...
- d. July 23, 1850, Mexico City
Mexico City
Mexico City is the Federal District , capital of Mexico and seat of the federal powers of the Mexican Union. It is a federal entity within Mexico which is not part of any one of the 31 Mexican states but belongs to the federation as a whole...
) was a Spanish military figure, Mexican military and political figure in the 19th century.

He joined the Spanish army on March 17, 1804, fighting in many battles of the Napoleonic Wars. He later served in New Spain
New Spain
New Spain, formally called the Viceroyalty of New Spain , was a viceroyalty of the Spanish colonial empire, comprising primarily territories in what was known then as 'América Septentrional' or North America. Its capital was Mexico City, formerly Tenochtitlan, capital of the Aztec Empire...
(Mexico
Mexico
The United Mexican States , commonly known as Mexico , is a federal constitutional republic in North America. It is bordered on the north by the United States; on the south and west by the Pacific Ocean; on the southeast by Guatemala, Belize, and the Caribbean Sea; and on the east by the Gulf of...
) in 1811. As a supporter of Agustin de Iturbide
Agustín de Iturbide
Agustín Cosme Damián de Iturbide y Aramburu , also known as Augustine I of Mexico, was a Mexican army general who built a successful political and military coalition that was able to march into Mexico City on 27 September 1821, decisively ending the Mexican War of Independence...
, who declared himself emperor of Mexico
Mexican Empire
The Mexican Empire or rarely Gran Mexico was the name of modern Mexico on two brief occasions in the 19th century when it was ruled by an emperor. With the Declaration of Independence of the Mexican Empire from Spain in 1821, Mexico became an independent monarchy, but was soon replaced with the...
, he became a brigadier general in command of the Army of the Three Guarantees
Army of the Three Guarantees
At the end of the Mexican War of Independence, the Army of the Three Guarantees was the name given to the army after the unification of the Spanish troops led by Agustín de Iturbide and the Mexican insurgent troops of Vicente Guerrero, consolidating Mexico's independence from Spain...
. Emperor Iturbide sent him to Central America
History of Central America
The history of Central America is the study of the past of the region known as Central America.- Before European contact :In pre-Columbian times, most of modern Central America was part of the Mesoamerican civilization. The Native American societies of Mesoamerica occupied the land ranging from...
to ensure its inclusion in the Mexican Empire. This he did, but when Iturbide fell in 1823 and Mexico was declared a republic, Central America (except for Chiapas
Chiapas
Chiapas officially Estado Libre y Soberano de Chiapas is one of the 31 states that, with the Federal District, comprise the 32 Federal Entities of Mexico. It is divided in 118 municipalities and its capital city is Tuxtla Gutierrez. Other important cites in Chiapas include San Cristóbal de las...
) declared independence from Mexico.

In 1836, Antonio López de Santa Anna
Antonio López de Santa Anna
Antonio de Padua María Severino López de Santa Anna y Pérez de Lebrón , often known as Santa Anna or López de Santa Anna, known as "the Napoleon of the West," was a Mexican political leader, general, and president who greatly influenced early Mexican and Spanish politics and government...
commissioned Filisola as his second-in-command during his fight for Texas. Filisola never had to command any decisive battles in the Texas Revolution
Texas Revolution
The Texas Revolution or Texas War of Independence was an armed conflict between Mexico and settlers in the Texas portion of the Mexican state Coahuila y Tejas. The war lasted from October 2, 1835 to April 21, 1836...
, but was left trailing Santa Anna as the Mexican leader sped forward. At the Guadalupe River
Guadalupe River
Guadalupe River may refer to:*Guadalupe River *Guadalupe River *Guadalupe River *Guadalupe River , in southern Spain*Guadalope, a river in northern Spain...
, Filisola was left in charge of the troops moving the heavy military equipment, supply wagons, and livestock across Texas. Moving the bulk of the army over rain-soaked land and numerous flooded crossings, proved to be logistically fatal. While Santa Anna quickly proceeded toward Sesma and the Colorado River
Colorado River
The Colorado River , is a river in the Southwestern United States and northwestern Mexico, approximately long, draining a part of the arid regions on the western slope of the Rocky Mountains. The watershed of the Colorado River covers in parts of seven U.S. states and two Mexican states...
, Filisola with the rear guard, was mired down in mud, low on food, short on supplies, and exhausted. He was left to delegate the orders issued by Santa Anna.

Filisola's dispatches to Santa Anna were captured by Sam Houston
Sam Houston
Samuel Houston, known as Sam Houston , was a 19th-century American statesman, politician, and soldier. He was born in Timber Ridge in the Shenandoah Valley of Virginia, of Scots-Irish descent. Houston became a key figure in the history of Texas and was elected as the first and third President of...
's men and this led directly to the battle. While Santa Anna was preoccupied with the attempt to the capture the new republic's officials, Filisola was instructed to wait for Colonel Amat's , General Gaona's, and Sesma forces to converge. Then, locate a crossing, establish a camp and take 500 men, cross, find, attack, and defeat the Texians and then cross the Brazos with the reminder of the army and supplies and proceed to form a camp at Harrisburg.

Vicente Filisola was somewhere between San Felipe and Fort Bend, with about 1000 men, (after dispatching General Cos with 500 men to reinforce Santa Anna), when Santa Anna was captured by the Texans at the Battle of San Jacinto
Battle of San Jacinto
The Battle of San Jacinto, fought on April 21, 1836, in present-day Harris County, Texas, was the decisive battle of the Texas Revolution. Led by General Sam Houston, the Texian Army engaged and defeated General Antonio López de Santa Anna's Mexican forces in a fight that lasted just eighteen...
.
Captain Miguel Aguirre, a wounded officer from Santa Anna’s guard, of the Tampico Regiment, made his way to Filisola’s camp on the Brazos, with word of the total demise of the Mexican army at San Jacinto. A few more locals and soldiers trickled in and also confirmed and much exaggerated their defeat. Filisola did not have any knowledge if Santa Anna was still even alive, thus he was unsure if he should rush to aid him. The news of the defeat had badly demoralized his army, and any action he would take against Houston might possibly risk the demise of all Mexican prisoners. His other option was to retreat, requesting instruction from officials in Mexico City.

The Mexican troops in Texas linked up at Elizabeth Powell's Boardinghouse near Fort Bend, where the Generals held a council of war headed by Filisola. Agreeing to depart, Filisola was responsible for organizing the withdrawal of the remaining 4000 Mexican soldiers from Texas.

Filisola carried out Santa Anna's orders to retreat. On May 24, he ordered Juan José Andrade to destroy the fortifications of the Alamo and to evacuate San Antonio
San Antonio, Texas
San Antonio is the seventh-largest city in the United States of America and the second-largest city within the state of Texas, with a population of 1.33 million. Located in the American Southwest and the south–central part of Texas, the city serves as the seat of Bexar County. In 2011,...
and "ratified", according to the Republic of Texas, the Treaties of Velasco
Treaties of Velasco
The Treaties of Velasco were two documents signed at Velasco, Texas, on May 14, 1836, between Antonio López de Santa Anna of Mexico and the Republic of Texas, in the aftermath of the Battle of San Jacinto ....
. Filisola and Andrade then combined their forces at Goliad and continued the retreat toward Matamoros.

After both parties to the treaties broke parts of the agreement, he received instructions from the Mexican government to not retreat. Although he offered to return to Texas, the exhausted Mexican force continued to Matamoros where on June 12, José de Urrea
José de Urrea
José de Urrea was a noted general for Mexico. He fought under General Antonio López de Santa Anna during the Texas Revolution. Urrea's forces were never defeated in battle during the Texas Revolution...
replaced Filisola in general command and Filisola resigned his own command to Juan José Andrade.

During the Mexican-American War Filisola commanded one of three divisions of the Mexican army.

Filisola died of cholera
Cholera
Cholera is an infection of the small intestine that is caused by the bacterium Vibrio cholerae. The main symptoms are profuse watery diarrhea and vomiting. Transmission occurs primarily by drinking or eating water or food that has been contaminated by the diarrhea of an infected person or the feces...
in Mexico City
Mexico City
Mexico City is the Federal District , capital of Mexico and seat of the federal powers of the Mexican Union. It is a federal entity within Mexico which is not part of any one of the 31 Mexican states but belongs to the federation as a whole...
in 1850.

Although Filisola was accused of being a coward and a traitor in overseeing the withdrawal of the Mexican troops, he was exonerated in 1841. However forgetting his own role in the defeat at San Jacinto, Santa Anna placed the entire blame on Filisola.

Filisola was famously quoted as saying about Santa Anna "His forehead had clouded over... Some interpreted it as discouragement, others as despair, and not a few as rudeness, scorn or indifference towards all the persons that he had to deal with or met with for some reason or other." Filisola often had the job of dealing with Santa Anna's snap judgements.