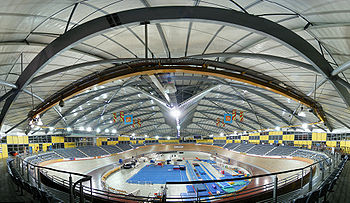 A velodrome is an arena for track cycling
Track cycling
Track cycling is a bicycle racing sport usually held on specially built banked tracks or velodromes using track bicycles....
. Modern velodromes feature steeply banked oval tracks, consisting of two 180-degree circular bends connected by two straights. The straights transition to the circular turn through a moderate easement curve
Track transition curve
A track transition curve, or spiral easement, is a mathematically calculated curve on a section of highway, or railroad track, where a straight section changes into a curve. It is designed to prevent sudden changes in centripetal force...
.

Banking in the turns, called superelevation, allows riders to keep their bikes relatively perpendicular to the surface while riding at speed. When traveling through the turns at racing speed, which may exceed 85 km/h (about 52 mph), the banking attempts to match the natural lean of a bicycle moving through that curve. There is no centrifugal effect 'trying' to tilt the bicycle outward: the net normal force is acting on the tires through the riding surface.

Riders are not always traveling at full speed or at a specific radius. Most events have riders all over the track. Team races (like the madison
Madison (cycling)
The madison is a team event in track cycling, named after the first Madison Square Garden in New York, and known as the "American race" in French and in Italian and Spanish as Americana.-History:...
) have some riders at speed and others riding more slowly. In match sprints riders may come to a stop by performing a 'track stand' in which they balance the bicycle on the sloped surface while keeping their feet locked into the pedals. For these reasons, the banking tends to be 10 to 15 degrees less than physics predicts. Also, the straights are banked 10 to 15 degrees more than physics would predict. These compromises make the track ridable at a range of speeds.

From the straight, the curve of the track increases gradually into the circular turn. This section of decreasing radius is called the easement spiral or transition. It allows bicycles to follow the track around the corner at a constant radial position. Thus riders can concentrate on tactics rather than steering.

Bicycles for velodromes have no brakes. They employ a single fixed rear gear, or cog, that does not freewheel. This helps maximize speed, reduces weight, and avoids sudden braking while nevertheless allowing the rider to slow by pushing back against the pedals.

Modern velodromes are constructed by specialised designers. The Schuermann
Schuermann
Schuermann Architects of Münster, Germany, is a dynasty of architects specialising in the design of velodromes, cycle tracks and indoor athletics tracks since 1925....
architects in Germany have built more than 125 tracks worldwide. Most of Schuermann's outdoor tracks are made of wood trusswork with a surface of strips of the rare rain-forest wood Afzelia
Afzelia
Afzelia is a genus in the subfamily Caesalpinioideae of the family Fabaceae . The thirteen species all are trees, native to tropical Africa or Asia.- Uses :...
. Indoor velodromes are built with less expensive pine surfaces. Other designers have been moving away from traditional materials. The 1996 Atlanta Olympics saw the introduction of synthetic surfaces supported by steel frames.

The track is measured along a line 20 cm up from the bottom. Olympic standard velodromes may only measure between 250 m and 400 m, and the length must be such that a whole or half number of laps give a distance of 1 km. Others range from 138 m to 500 m, although 333m is the official length used in major events (Ref: Fox, 2011). The velodrome at Calshot Spit
Calshot Spit
Calshot Spit is a one-mile long sand and shingle bank, located on the southern bank of the open end of Southampton Water, on the south coast of England....
, Hampshire
Hampshire
Hampshire is a county on the southern coast of England in the United Kingdom. The county town of Hampshire is Winchester, a historic cathedral city that was once the capital of England. Hampshire is notable for housing the original birthplaces of the Royal Navy, British Army, and Royal Air Force...
, UK is only 142 m because it was built to fit inside an aircraft hangar
Hangar
A hangar is a closed structure to hold aircraft or spacecraft in protective storage. Most hangars are built of metal, but other materials such as wood and concrete are also sometimes used...
. It has especially steep banking. Forest City Velodrome
Forest City Velodrome
The Forest City Velodrome is an indoor cycling facility in London, Ontario, Canada. The building was constructed in 1963 as the London Gardens, home to the London Knights ice hockey team. In 1994 it was renamed London Ice House...
in London, Ontario
London, Ontario
London is a city in Southwestern Ontario, Canada, situated along the Quebec City – Windsor Corridor. The city has a population of 352,395, and the metropolitan area has a population of 457,720, according to the 2006 Canadian census; the metro population in 2009 was estimated at 489,274. The city...
, Canada
Canada
Canada is a North American country consisting of ten provinces and three territories. Located in the northern part of the continent, it extends from the Atlantic Ocean in the east to the Pacific Ocean in the west, and northward into the Arctic Ocean...
, is the world's shortest at 138 m. It was built to fit a hockey
Ice hockey
Ice hockey, often referred to as hockey, is a team sport played on ice, in which skaters use wooden or composite sticks to shoot a hard rubber puck into their opponent's net. The game is played between two teams of six players each. Five members of each team skate up and down the ice trying to take...
arena. Like Calshot, it has steep banking.

Many old tracks were built around athletics tracks or other grounds and any banking was shallow. The smaller the track, the steeper the banking. A 250 m track banks around 45°, while a 333 m track banks around 32°. Some older velodromes were built to imperial standards. The Dick Lane Velodrome in East Point, Georgia, USA is 1/5 of a mile, or 321.8m.

Velodrome tracks can be surfaced with different materials, including timber, synthetics and concrete. Shorter, newer, and Olympic quality tracks tend to be timber or synthetics; longer, older, or inexpensive tracks are concrete, macadam, or even cinder.

Important cycling events are usually held on tracks which have lines laid out in a specified arrangement. Some other tracks also follow these protocols, but others have a different arrangement of lines to suit their facility and to assist riders in holding a straight line and in avoiding drifting onto the flatter section below the bankings where they risk their tyres sliding out.

Between the infield (sometimes referred to as an apron) and the actual track is the blue band (called "côte d'azur") which is typically 10% of the surface. The blue band is not technically a part of the track; although it is not illegal to ride there, moving into it to shortcut another rider will result in disqualification. During time trials, pursuits or other timed events, the blue band is obstructed with sponges or other objects. The blue band is a warning to cyclists that they may scrape their pedal along the infield when in a curve, which can easily result in a crash.

20 cm above the blue band is the black line. The inner edge of this 5 cm line defines the length of the track. 90 cm above the inside of the track is the outside of the 5 cm wide red sprinter
Sprint (cycling)
The sprint or match sprint is a track cycling event involving between 2 and 4 riders, though they are usually run as a one-on-one match race between opponents who, unlike in the individual pursuit, start next to each other.- Racing style :...
's line. The zone between black and red lines is the optimum route around the track. A rider leading in this zone cannot be passed on the inside; other riders must pass on the longer outside route.

Minimum 250 cm (or half the track width) above the inside of the track is the blue stayers' line. This line serves in races behind motorbikes as a separation line. Stayers below the blue line may not be overtaken on the inside. In Madison races (named after six-day races at Madison Square Garden in New York City, New York and known as the American), the team's relief rider rests above the Stayer’s line by riding slowly until his or her teammate comes around the track and throws him or her back into the race.

The finish line is black on white and towards the end of the home straight. Red lines are marked in the middle of each straight as start and finish line for pursuit races. A white 200 m line marks 200 m before the finish.

Velodromes may be indoors or outdoors. In the heyday of velodrome racing (1890–1920), indoor tracks were common. When hosting six-day races, they were popular for revelers and urban sophisticates to congregate in the early hours after the bars had closed. Indoor tracks are not affected by weather and are more comfortable for spectators. They ride smoother and last longer. Despite the advantages of indoor tracks, outdoor velodromes are more common, as an outdoor venue does not require a building, making it more affordable, especially when new. Today, although many classic indoor tracks have been torn out of buildings and replaced by venues for more popular sports, velodromes are still sometimes built into indoor venues, particularly where track racing can generate enough to cover the expense of dedicating a building to it.

There are a variety of formats in velodrome races. A typical event will consist of several races of varying distances and structures. The most straight forward is the "scratch race," where riders compete over a specified distance and the order of finish determines the winners.

Points races assign value to specific laps throughout a race and riders position in relation to the field, generally the leading rider and occasionally the second place rider will be awarded points. The structure and timing of points races varies greatly, but the winner is determined by the accumulation of points and not necessarily the rider crossing the line first at the end of the race.

Elimination race, also known as "devil take the hindmost" removes the last place rider from each lap until only three to five riders remain. The final standings are then determined by a sprint over the last two laps.

Madison races
Madison (cycling)
The madison is a team event in track cycling, named after the first Madison Square Garden in New York, and known as the "American race" in French and in Italian and Spanish as Americana.-History:...
team up pairs of riders in a tag-team format. Riders "sling" their teammate forward to facilitate alternating sprints that keep the pace very high during typically long races (30km or more compared to 3-10km for most other races). The name is taken from Madison Square Garden
Madison Square Garden
Madison Square Garden, often abbreviated as MSG and known colloquially as The Garden, is a multi-purpose indoor arena in the New York City borough of Manhattan and located at 8th Avenue, between 31st and 33rd Streets, situated on top of Pennsylvania Station.Opened on February 11, 1968, it is the...
where the format was popular in the early 1900s.

Keirin races
Keirin
is a track cycling event in which racing cyclists sprint for victory. Keirin originated in Japan in 1948; the first Olympic competitions in the sport occurred in 2000....
involve pacing 6–9 riders with a motorcycle until the last lap and a half when a sprint for the finish determines the winner.

Omnium competition assigns a point value to final standings of each race and riders accumulate points over the course of an event or series of events. This is not a specific race, but a competition that ties races and events together.