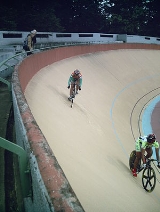 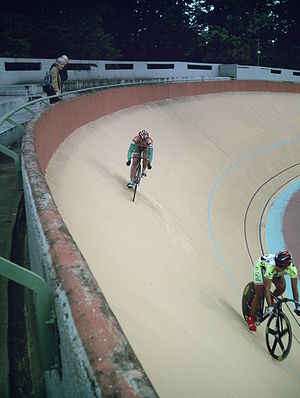 The sprint or match sprint is a track cycling
Track cycling
Track cycling is a bicycle racing sport usually held on specially built banked tracks or velodromes using track bicycles....
event involving between 2 and 4 riders, though they are usually run as a one-on-one match race between opponents who, unlike in the individual pursuit
Individual pursuit
The individual pursuit is a track cycling event where two cyclists begin the race from a stationary position on opposite sides of the track.The event is held over 4 km for men and 3 km for women. The two riders start at the same time and set off to complete the race distance in the...
, start next to each other.

Depending on the size of the velodrome
Velodrome
A velodrome is an arena for track cycling. Modern velodromes feature steeply banked oval tracks, consisting of two 180-degree circular bends connected by two straights...
, this event can be from 600 m to 1000 m. Unlike the sprints in athletics, these events do not usually start with riders sprinting from the starting line and they are not confined to lanes. The early parts of each race will often be highly tactical with riders pedaling slowly, as they carefully jockey for position, often trying to force their opponents up high on the track in an attempt to get their rivals to make the first move. Some even bring their bicycles to a complete stop, balanced upright with both feet still on the pedals (a track stand
Track stand
The track stand is a technique that bicycle riders can use to maintain balanced while their bicycle remains stationary or moves only minimal distances. The technique originated in track cycling and is now used by other types of cyclists wishing to stop for a short time without putting a foot on the...
), in an attempt to make the other rider take the lead. The reason for this apparently strange behavior, as in many track cycling events, is both aerodynamics
Aerodynamics
Aerodynamics is a branch of dynamics concerned with studying the motion of air, particularly when it interacts with a moving object. Aerodynamics is a subfield of fluid dynamics and gas dynamics, with much theory shared between them. Aerodynamics is often used synonymously with gas dynamics, with...
and tactics.

When racing at high speed, the rider who manages to stay just behind their opponent can draft, expending less effort. By riding behind the 'lead out' rider, the second rider reduces the aerodynamic drag they feel. Just before the finish, the trailing rider pulls out of the slipstream, and using their fresher legs may be able to overtake their opponent before the line. To prevent this, the leading rider may choose to accelerate quickly before the last lap, hoping to catch his opponent off guard and establish a large enough gap to negate the aerodynamic effect or to keep the speed high enough to prevent his opponent from completing a pass.

As defined by UCI
Union Cycliste Internationale
Union Cycliste Internationale is the world governing body for sports cycling and oversees international competitive cycling events. The UCI is based in Aigle, Switzerland....
rules, the first round of competition used to qualify for the sprint competition is the flying 200 m time trial. In this round each rider completes 2 to 3 warm up laps and then completes the final 200 m, which is usually just under a lap. The number of riders that qualify for the sprint rounds depends on the competition; in World Cup competitions, 16 riders will advance and in a World Championships, 24 riders will advance. The top riders are seeded in the following rounds, meaning the fastest qualifier will face the slowest qualifier and so on.
Knock out rounds then proceed, initially on a one race basis and then on a best-of three-race format from the quarter-final stage. Riders defeated in the earlier rounds may get a chance to continue in the competition through the repechage
Repechage
Repechage is a practice amongst ladder competitions that allows participants that failed to meet qualifying standards by a small margin to continue to the next round.- Types of repechage :...
races.

Famous track sprinters of the past include Britain
United Kingdom
The United Kingdom of Great Britain and Northern IrelandIn the United Kingdom and Dependencies, other languages have been officially recognised as legitimate autochthonous languages under the European Charter for Regional or Minority Languages...
's Reg Harris
Reg Harris
Reginald - 'Reg' - Hargreaves Harris OBE was a leading English track racing cyclist in the 1940s and 1950s. He won the world amateur sprint title in 1947, two Olympic silver medals in 1948, and the professional title in 1949, 1950, 1951 and 1954...
, Australia
Australia
Australia , officially the Commonwealth of Australia, is a country in the Southern Hemisphere comprising the mainland of the Australian continent, the island of Tasmania, and numerous smaller islands in the Indian and Pacific Oceans. It is the world's sixth-largest country by total area...
's Dunc Gray
Dunc Gray
Edgar Laurence "Dunc" Gray was a track cyclist from Goulburn, New South Wales, Australia who won a bronze medal for the 1000m time trial at the 1928 Summer Olympics in Amsterdam- Australia's first Olympic Games medal in cycling...
and Sid Patterson
Sid Patterson
Sid Patterson was a world champion amateur and professional track cyclist from Melbourne, Victoria, Australia. While a teenager, Patterson won every Victorian and Australian title between 1,000 metres and ten miles...
, Germany
Germany
Germany , officially the Federal Republic of Germany , is a federal parliamentary republic in Europe. The country consists of 16 states while the capital and largest city is Berlin. Germany covers an area of 357,021 km2 and has a largely temperate seasonal climate...
's Michael Hübner
Michael Hübner
Michael Hübner is a German former professional sprint track cyclist, who became world champion in sprint, Keirin and team sprint.- External links :...
and Japan
Japan
Japan is an island nation in East Asia. Located in the Pacific Ocean, it lies to the east of the Sea of Japan, China, North Korea, South Korea and Russia, stretching from the Sea of Okhotsk in the north to the East China Sea and Taiwan in the south...
's Koichi Nakano
Koichi Nakano
of Japan is a former professional racing cyclist and ten-time world champion track racing cyclist. He is among the best track sprinters of modern times. He won an unprecedented 10 consecutive professional sprint gold medals at the UCI track world Championships from 1977 to 1986...
.
The former world and current Olympic champion is Chris Hoy
Chris Hoy
Sir Christopher Andrew "Chris" Hoy, MBE is a Scottish track cyclist representing Great Britain and Scotland. He is a multiple world champion and Olympic Games gold medal winner...
, who was recently knighted in the British royal court.

The Keirin
Keirin
is a track cycling event in which racing cyclists sprint for victory. Keirin originated in Japan in 1948; the first Olympic competitions in the sport occurred in 2000....
is a variant of the sprint in which a higher number (usually 6-8, or 9 in Japan) of sprinters compete in a very different format. Riders are paced in the early laps by (and are required to stay behind) a derny
Derny
A Derny is a motorized bicycle for motor-paced cycling events such as during six-day and Keirin racing, or motor-paced road races. It is driven by a 98cc Zurcher two-stroke engine and by being pedalled through a fixed gear, typically of 70 teeth on the front chainring and 11 on the sprocket on the...
motorcycle, which slowly increases the speed of the race from 25 km/h to about 50km/h. It then leaves the track with about 600-700 m remaining. The first rider across the finish line in the high-speed (sometimes 70 km/h) finish is the winner.

The chariot is a short, usually one lap, race. Depending on track size, between 4 and 8 cyclists start from a standing start, and do an all out sprint for one lap. The first rider across the finish line is the winner.
The source of this article is wikipedia, the free encyclopedia.  The text of this article is licensed under the GFDL.