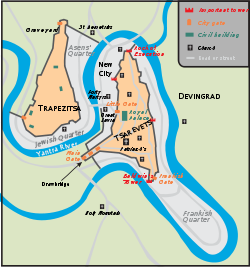 Veliko Tarnovo is one of the oldest settlements in Bulgaria, having a history of more than 5 millennia, as the first traces of human presence dating from the 3rd millennium B.O.T are on Trapezitsa Hill.

Veliko Tarnovo grew quickly to become the strongest Bulgarian fortification of the Middle Ages
Middle Ages
The Middle Ages is a periodization of European history from the 5th century to the 15th century. The Middle Ages follows the fall of the Western Roman Empire in 476 and precedes the Early Modern Era. It is the middle period of a three-period division of Western history: Classic, Medieval and Modern...
between the 12th and 14th century and the most important political, economic, cultural and religious centre of the empire. The city was described by Bulgarian cleric Gregory Tsamblak
Gregory Tsamblak
Gregory Tsamblak ; was a Bulgarian writer and cleric, metropolitan of Kiev between 1413 and 1420. His name is also spelled Gregorije Camblak....
in the 14th century as "a very large city, handsome and surrounded by walls with 12,000 to 15,000 inhabitants".

In the 14th century as the Byzantine Empire
Byzantine Empire
The Byzantine Empire was the Eastern Roman Empire during the periods of Late Antiquity and the Middle Ages, centred on the capital of Constantinople. Known simply as the Roman Empire or Romania to its inhabitants and neighbours, the Empire was the direct continuation of the Ancient Roman State...
weakened, Tarnovo claimed to be the Third Rome
Third Rome
The term Third Rome describes the idea that some European city, state, or country is the successor to the legacy of the Roman Empire and its successor state, the Byzantine Empire ....
based on its preeminent cultural influence in the Balkans
Balkans
The Balkans is a geopolitical and cultural region of southeastern Europe...
and the Slavic Orthodox
Slavic Orthodox
Slavic Orthodox Church or Slavonic Orthodox Church is an umbrella term for East Orthodox churches that use Church Slavonic in liturgy, the latter being of Byzantine Rite...
world.

As the capital of the Second Bulgarian Empire, Tarnovo was a quasi-cosmopolitan city, with many foreign merchants and envoys. It is known that Tarnovo had Armenian
Armenians
Armenian people or Armenians are a nation and ethnic group native to the Armenian Highland.The largest concentration is in Armenia having a nearly-homogeneous population with 97.9% or 3,145,354 being ethnic Armenian....
, Jewish and Roman Catholic ("Frankish") merchant quarters besides a dominant Bulgarian population. The discovery of three Gothic
Gothic art
Gothic art was a Medieval art movement that developed in France out of Romanesque art in the mid-12th century, led by the concurrent development of Gothic architecture. It spread to all of Western Europe, but took over art more completely north of the Alps, never quite effacing more classical...
statuette heads indicates there may have also been a Catholic church.

Tarnovgrad (Tırnova to Ottomans), along with the rest of present-day Bulgaria, remained under Ottoman rule until the 19th century, when national identity and culture reasserted themselves as a strengthening resistance movement. The idea of the establishment of an independent Bulgarian church
Bulgarian Exarchate
The Bulgarian Exarchate was the official name of the Bulgarian Orthodox Church before its autocephaly was recognized by the Ecumenical See in 1945 and the Bulgarian Patriarchate was restored in 1953....
and nation motivated the 1875 and 1876 uprisings in town. On 23 April 1876, the April Uprising
April Uprising
The April Uprising was an insurrection organised by the Bulgarians in the Ottoman Empire from April to May 1876, which indirectly resulted in the re-establishment of Bulgaria as an autonomous nation in 1878...
marked the beginning of the end of the Ottoman occupation. It was soon followed by the Russo-Turkish War (1877–1878).

On 7 July 1877, Russian general Joseph Vladimirovich Gourko
Joseph Vladimirovich Gourko
Count Iosif Vladimirovich Romeyko-Gurko , also known as Joseph or Ossip Gourko, was a Russian Field Marshal prominent during the Russo-Turkish War ....
liberated Veliko Tarnovo, ending the 480-year-rule of the Ottoman Empire. In 1878, the Treaty of Berlin
Treaty of Berlin, 1878
The Treaty of Berlin was the final act of the Congress of Berlin , by which the United Kingdom, Austria-Hungary, France, Germany, Italy, Russia and the Ottoman Empire under Sultan Abdul Hamid II revised the Treaty of San Stefano signed on March 3 of the same year...
created a Principality of Bulgaria between the Danube
Danube
The Danube is a river in the Central Europe and the Europe's second longest river after the Volga. It is classified as an international waterway....
and the Stara Planina range, with its seat at the old Bulgarian capital of Veliko Tarnovo.

On 17 April 1879, the first National Assembly convened in Veliko Turnovo to ratify the state's first constitution, known as the Tarnovo Constitution
Tarnovo Constitution
The Tarnovo Constitution was the first constitution of Bulgaria. It was adopted on 16 April 1879 by the Constituent National Assembly held in Veliko Tarnovo as part of the establishment of the Principality of Bulgaria...
, the key result of which resulted in the transfer of Parliament from Tarnovgrad to Sofia
Sofia
Sofia is the capital and largest city of Bulgaria and the 12th largest city in the European Union with a population of 1.27 million people. It is located in western Bulgaria, at the foot of Mount Vitosha and approximately at the centre of the Balkan Peninsula.Prehistoric settlements were excavated...
, which today remains the Bulgarian capital.

In deference to the city's past, Tsar Ferdinand Saxe-Coburg Gotha chose the St Forty Martyrs Church in Veliko Tarnovo as the place to declare the complete independence of Bulgaria on 5 October 1908.

In 1965, the city, then officially known as Tarnovo, was renamed to Veliko Tarnovo (Great Tarnovo) to commemorate its rich history and importance.

According to Census 2011, Veliko Tarnovo has a population of 68,197 inhabitants as of February 2011. The number of the residents of the city reached its peak in the period 1986-1991 when exceeded 70,000. The following table presents the change of the population after the liberation of the country in 1878.

One of Bulgaria's primary tourist destinations, Veliko Tarnovo boasts many historical monuments and landmarks, such as

Veliko Tarnovo is twinned with the following cities:http://www.infotourism.net/story.php?storyid=1430