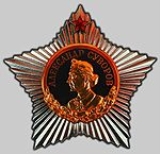 Encyclopedia
The Order of Suvorov is a Soviet
Soviet Union
The Soviet Union , officially the Union of Soviet Socialist Republics , was a constitutionally socialist state that existed in Eurasia between 1922 and 1991....
award, named after Aleksandr Suvorov (1729–1800), that was established on July 29, 1942 (during World War II
World War II
World War II, or the Second World War , was a global conflict lasting from 1939 to 1945, involving most of the world's nations—including all of the great powers—eventually forming two opposing military alliances: the Allies and the Axis...
) by a decision of the Presidium of Supreme Soviet of the USSR. This decoration was created to award senior army personnel for exceptional leadership in combat operations. The Order of Suvorov was broken down into three different classes: 1st class, 2nd class, and 3rd class. Georgi Zhukov became the first recipient of the 1st class Order of Suvorov, on January 28, 1943.

The 1st class order was awarded to army commanders for exceptional direction of combat operations. It consists of a 55 mm solid platinum star with a 30 mm platinum medallion in the center with the bust of Alexander Suvorov
Alexander Suvorov
Alexander Vasilyevich Suvorov , Count Suvorov of Rymnik, Prince in Italy, Count of the Holy Roman Empire , was the fourth and last generalissimo of the Russian Empire.One of the few great generals in history who never lost a battle along with the likes of Alexander...
in solid gold over a gold wreath of leaves surrounded by inscription "Alexander Suvorov" in gold Cyrillic letters. On the outer edge of the medallion is a ring of gold with a red enameled inner ring. On the top point of the platinum star is a ruby star surrounded by gold.

The 2nd class order was awarded to corps, divisions, and brigade commanders for a decisive victory over a numerically superior enemy. The 2nd class medal is a 50 mm solid gold star without the ruby star on the top point with a 25 mm medallion that is the same as the 1st class award in the center of the star, but is made of silver.

The 3rd class order was awarded to regiment commanders, their chief of staff, and battalion and company commanders for outstanding leadership leading to a battle victory. The 3rd class medal is the same as the 2nd class medal except that it is made entirely of silver and the inscription is red enameled.

Despite its official criteria, both the first and second class of the order were also sometimes awarded to defense industry executives, as well as designers of various weapons and military equipment.

After the end of the USSR, Russia
Russia
Russia or , officially known as both Russia and the Russian Federation , is a country in northern Eurasia. It is a federal semi-presidential republic, comprising 83 federal subjects...
kept the order.