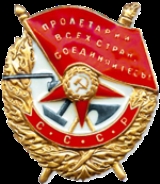 Encyclopedia
The Soviet
Soviet Union
The Soviet Union , officially the Union of Soviet Socialist Republics , was a constitutionally socialist state that existed in Eurasia between 1922 and 1991....
government of Russia
Russia
Russia or , officially known as both Russia and the Russian Federation , is a country in northern Eurasia. It is a federal semi-presidential republic, comprising 83 federal subjects...
established the Order of the Red Banner (in Russian: Орден Крaсного Знамени
Orden Krasnogo Znameni), a military decoration, on September 16, 1918 during the Russian Civil War
Russian Civil War
The Russian Civil War was a multi-party war that occurred within the former Russian Empire after the Russian provisional government collapsed to the Soviets, under the domination of the Bolshevik party. Soviet forces first assumed power in Petrograd The Russian Civil War (1917–1923) was a...
. The first recipient was Vasily Blyukher
Vasily Blyukher
Vasily Konstantinovich Blyukher Vasily Konstantinovich Blyukher Vasily Konstantinovich Blyukher (also spelled Bliukher, Blücher, etc., , Soviet military commander, was among the prominent victims of Joseph Stalin's Great Purge of the late 1930s....
on September 28, 1918.
The second recipient was Iona Yakir
Iona Yakir
Iona Emmanuilovich Yakir was the Red Army commander and one of the world's major military reformers between World War I and World War II.-Early years:...
.

The order consisted of a white-enamelled badge, which had a golden Hammer and Sickle
Hammer and sickle
The hammer and sickle is a part of communist symbolism and its usage indicates an association with Communism, a Communist party, or a Communist state. It features a hammer and a sickle overlapping each other. The two tools are symbols of the industrial proletariat and the peasantry; placing them...
badge surrounded by two golden panicles of wheat
Wheat
Wheat is a cereal grain, originally from the Levant region of the Near East, but now cultivated worldwide. In 2007 world production of wheat was 607 million tons, making it the third most-produced cereal after maize and rice...
on a Red Star
Red star
A red star, five-pointed and filled, is an important ideological and religious symbol which has been used for various purposes, such as: state emblems, flags, monuments, ornaments, and logos.- Symbol of communism :...
, backed by crossed hammer, plough
Plough
The plough or plow is a tool used in farming for initial cultivation of soil in preparation for sowing seed or planting. It has been a basic instrument for most of recorded history, and represents one of the major advances in agriculture...
, torch and a red flag
Red flag
In politics, a red flag is a symbol of Socialism, or Communism, or sometimes left-wing politics in general. It has been associated with left-wing politics since the French Revolution. Socialists adopted the symbol during the Revolutions of 1848 and it became a symbol of communism as a result of its...
bearing the motto Proletarians (Workers) of the World, Unite!. This was surrounded by two golden panicles of wheat; at the bottom were the letters "SSSR" .

The Order was originally presented as a badge, which was worn on the left chest. A ribbon attachment was added, which consisted of a red ribbon bearing a wide white central stripe and a narrow white stripe on the edges.

The order was awarded to individuals as well as whole formations, which then added the prefix "Red Banner" to their official designations. Naval vessels also flew a special flag. Some of the most notable are listed here: