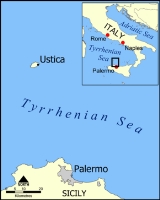 Excavations begun in 1989 at Faraglioni have unearthed what was a large prehistoric village dating from the 14th to the 13th century BC. The foundations of some 300 stone-built houses were discovered, and the defensive walls of the settlement are among the strongest fortifications of any period known in Italy. It is believed that these early settlers came over from the Aeolian Islands.

In historic times, the island has been populated at least since about 1500 BC by Phoenicia
Phoenicia
Phoenicia , was an ancient civilization in Canaan which covered most of the western, coastal part of the Fertile Crescent. Several major Phoenician cities were built on the coastline of the Mediterranean. It was an enterprising maritime trading culture that spread across the Mediterranean from 1550...
n peoples. In ancient Greece
Ancient Greece
Ancient Greece is a civilization belonging to a period of Greek history that lasted from the Archaic period of the 8th to 6th centuries BC to the end of antiquity. Immediately following this period was the beginning of the Early Middle Ages and the Byzantine era. Included in Ancient Greece is the...
, the Island was named Osteodes (ossuary) in memory of the thousands of Carthaginian mutineers left there to die of hunger in the 4th century BC. The Romans
Ancient Rome
Ancient Rome was a thriving civilization that grew on the Italian Peninsula as early as the 8th century BC. Located along the Mediterranean Sea and centered on the city of Rome, it expanded to one of the largest empires in the ancient world....
renamed the island Ustica, Latin for burnt, for its black rocks. The island is also known locally as the "black pearl".

In the 6th century, a Benedictine
Benedictine
Benedictine refers to the spirituality and consecrated life in accordance with the Rule of St Benedict, written by Benedict of Nursia in the sixth century for the cenobitic communities he founded in central Italy. The most notable of these is Monte Cassino, the first monastery founded by Benedict...
community settled in the island, but was soon forced to move because of ongoing wars between Europe
Europe
Europe is, by convention, one of the world's seven continents. Comprising the westernmost peninsula of Eurasia, Europe is generally 'divided' from Asia to its east by the watershed divides of the Ural and Caucasus Mountains, the Ural River, the Caspian and Black Seas, and the waterways connecting...
ans and Arab
Arab
Arab people, also known as Arabs , are a panethnicity primarily living in the Arab world, which is located in Western Asia and North Africa. They are identified as such on one or more of genealogical, linguistic, or cultural grounds, with tribal affiliations, and intra-tribal relationships playing...
s. Attempts to colonize the island in the Middle Ages
Middle Ages
The Middle Ages is a periodization of European history from the 5th century to the 15th century. The Middle Ages follows the fall of the Western Roman Empire in 476 and precedes the Early Modern Era. It is the middle period of a three-period division of Western history: Classic, Medieval and Modern...
failed because of raids by Barbary
Barbary Coast
The Barbary Coast, or Barbary, was the term used by Europeans from the 16th until the 19th century to refer to much of the collective land of the Berber people. Today, the terms Maghreb and "Tamazgha" correspond roughly to "Barbary"...
pirates.

In the mid-18th century, the island was settled by approximately 90 people from the island of Lipari
Lipari
Lipari is the largest of the Aeolian Islands in the Tyrrhenian Sea off the north coast of Sicily, and the name of the island's main town. It has a permanent population of 11,231; during the May–September tourist season, its population may reach up to 20,000....
, an island also located north of Sicily, but east of Ustica. They brought with them the patron saint of Lipari, Bartholomew the Apostle, who became the patron saint of Ustica as well. In the mid- to late 19th century and early 20th century, as the population of the island grew too large, hundreds of Ustican families emigrated to the United States. Many of these families settled in New Orleans and surrounding areas, where there are today thousands of descendants whose ties remain strong to Ustica. A smaller number of families settled in San Jose and San Francisco, in New York, and in Massachusetts.

During the Fascist years in Italy and until the 1950s, Ustica was used as an island prison. Benito Mussolini
Benito Mussolini
Benito Amilcare Andrea Mussolini was an Italian politician who led the National Fascist Party and is credited with being one of the key figures in the creation of Fascism....
banished thousands of political opponents to Ustica, often as many as 1,500 at a time; many were homosexuals. In the early 1940s Yugoslav war prisoners were crammed onto the island, bringing with them malnutrition and tuberculosis. In the 1950s they were followed by suspected Mafia
Mafia
The Mafia is a criminal syndicate that emerged in the mid-nineteenth century in Sicily, Italy. It is a loose association of criminal groups that share a common organizational structure and code of conduct, and whose common enterprise is protection racketeering...
hoods expelled from Sicily. The most famous political prisoner detained on the island was Antonio Gramsci
Antonio Gramsci
Antonio Gramsci was an Italian writer, politician, political philosopher, and linguist. He was a founding member and onetime leader of the Communist Party of Italy and was imprisoned by Benito Mussolini's Fascist regime...
.

The island became infamous on June 27, 1980, when Aerolinee Itavia Flight 870
Aerolinee Itavia Flight 870
Aerolinee Itavia Flight 870, also known in the Italian media as the Ustica Massacre , was an Italian flight which crashed into the Tyrrhenian Sea while en route from Bologna, Italy, to Palermo, Italy, in 1980. The crash has been attributed to either a terrorist bomb or to an air-to-air missile...
crashed a short distance from the island while on approach to Palermo
Palermo
Palermo is a city in Southern Italy, the capital of both the autonomous region of Sicily and the Province of Palermo. The city is noted for its history, culture, architecture and gastronomy, playing an important role throughout much of its existence; it is over 2,700 years old...
, killing all 81 passengers and crew. 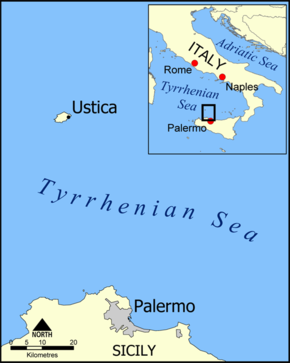 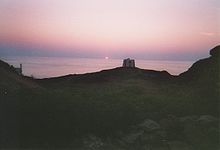 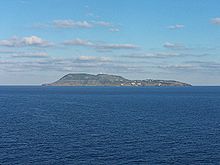 The island is characterized by reduced sources of water, and the vegetation is consequently scarce. The coast has numerous rocks and grottoes.

Ustica is home of the honeybee Apis mellifera sicula.

Ustica is particularly known for scuba diving
Scuba diving
Scuba diving is a form of underwater diving in which a diver uses a scuba set to breathe underwater....
, with a number of diving schools established on the island. Recreational divers are attracted by the relatively deep dives, which are a feature of the island's volcanic geology.
The source of this article is wikipedia, the free encyclopedia.  The text of this article is licensed under the GFDL.