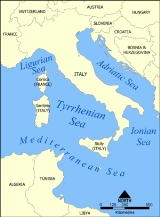 Overview
The Tyrrhenian Sea is part of the Mediterranean Sea
Mediterranean Sea
The Mediterranean Sea is a sea connected to the Atlantic Ocean surrounded by the Mediterranean region and almost completely enclosed by land: on the north by Anatolia and Europe, on the south by North Africa, and on the east by the Levant...
off the western coast of Italy
Italy
Italy , officially the Italian Republic languages]] under the European Charter for Regional or Minority Languages. In each of these, Italy's official name is as follows:;;;;;;;;), is a unitary parliamentary republic in South-Central Europe. To the north it borders France, Switzerland, Austria and...
.
The sea is bounded by Corsica
Corsica
Corsica is an island in the Mediterranean Sea. It is located west of Italy, southeast of the French mainland, and north of the island of Sardinia....
and Sardinia
Sardinia
Sardinia is the second-largest island in the Mediterranean Sea . It is an autonomous region of Italy, and the nearest land masses are the French island of Corsica, the Italian Peninsula, Sicily, Tunisia and the Spanish Balearic Islands.The name Sardinia is from the pre-Roman noun *sard[],...
(to the west), Tuscany
Tuscany
Tuscany is a region in Italy. It has an area of about 23,000 square kilometres and a population of about 3.75 million inhabitants. The regional capital is Florence ....
, Lazio, Campania
Campania
Campania is a region in southern Italy. The region has a population of around 5.8 million people, making it the second-most-populous region of Italy; its total area of 13,590 km² makes it the most densely populated region in the country...
, Basilicata
Basilicata
Basilicata , also known as Lucania, is a region in the south of Italy, bordering on Campania to the west, Apulia to the north and east, and Calabria to the south, having one short southwestern coastline on the Tyrrhenian Sea between Campania in the northwest and Calabria in the southwest, and a...
and Calabria
Calabria
Calabria , in antiquity known as Bruttium, is a region in southern Italy, south of Naples, located at the "toe" of the Italian Peninsula. The capital city of Calabria is Catanzaro....
(to the east) and Sicily
Sicily
Sicily is a region of Italy, and is the largest island in the Mediterranean Sea. Along with the surrounding minor islands, it constitutes an autonomous region of Italy, the Regione Autonoma Siciliana Sicily has a rich and unique culture, especially with regard to the arts, music, literature,...
(to the south).

The Tyrrhenian Sea is situated near where the African
African Plate
The African Plate is a tectonic plate which includes the continent of Africa, as well as oceanic crust which lies between the continent and various surrounding ocean ridges.-Boundaries:...
and European Plates meet; therefore mountain chains and active volcanoes such as Mount Marsili
Marsili
Marsili is a large undersea volcano in the Tyrrhenian Sea, about south of Naples. The seamount is about 3,000 meters tall; its peak and crater are about 450 meters below the sea surface...
are found in its depths.

What did the tyrrhenian sea provide for the ancient romans?
More
x