Typhoon submarines are among the quietest Russian sea vessels in operation, being quieter and yet more maneuverable than their predecessors. Besides their missile armament, the Typhoon class features six torpedo tube
Torpedo tube
A torpedo tube is a device for launching torpedoes. There are two main types of torpedo tube: underwater tubes fitted to submarines and some surface ships, and deck-mounted units installed aboard surface vessels...
s; four are designed to handle RPK-2
SS-N-15
The RPK-2 Viyuga cruise missile is a complex Russian submarine launched missile. Its NATO reporting name is Starfish ....
(SS-N-15) missiles or Type 53 torpedo
Type 53 torpedo
Type 53 is the common name for a family of 53 cm torpedoes manufactured in Russia, starting with the 53-27 torpedo and continuing to the modern UGST....
es, and the other two are designed to launch RPK-7
SS-N-16
SS-N-16 Stallion refers to a Soviet 650 mm anti-ship missile that was deployed between 1979 and 1981. The name is a combination of the American designation of SS-N-16 and the NATO term of Stallion for Soviet RU-100s.It refers to either...
(SS-N-16) missiles, Type 65 torpedo
Type 65 torpedo
The Type 65 is a torpedo manufactured in the Soviet Union/Russia. It was developed to counter the US Navy's aircraft carrier battle groups as well as to be used against large merchant targets such as supertankers...
es, or mine
Naval mine
A naval mine is a self-contained explosive device placed in water to destroy surface ships or submarines. Unlike depth charges, mines are deposited and left to wait until they are triggered by the approach of, or contact with, an enemy vessel...
s. A Typhoon class submarine can stay submerged for periods up to 120 days in normal conditions, and potentially more if deemed necessary (e.g., in the case of a nuclear war
Nuclear warfare
Nuclear warfare, or atomic warfare, is a military conflict or political strategy in which nuclear weaponry is detonated on an opponent. Compared to conventional warfare, nuclear warfare can be vastly more destructive in range and extent of damage...
). Their primary weapons system is composed of 20 R-39
R-39 missile
The R-39 Rif, or Rif-Ma was a Russian submarine launched ballistic missile . It had the NATO reporting name of SS-N-20 Sturgeon and the bilateral arms control designation RSM-52...
(NATO: SS-N-20) ballistic missiles (SLBM) with a maximum of 10 MIRV
Multiple independently targetable reentry vehicle
A multiple independently targetable reentry vehicle warhead is a collection of nuclear weapons carried on a single intercontinental ballistic missile or a submarine-launched ballistic missile . Using a MIRV warhead, a single launched missile can strike several targets, or fewer targets redundantly...
nuclear warheads each.

Typhoon class submarines feature multiple pressure hulls that simplify internal design while making the vessel much wider than a normal submarine. In the main body of the sub, two Delta class
Delta class submarine
The Delta class is a class of submarines which formed the backbone of the Soviet and Russian strategic submarine fleet since its introduction in 1973...
pressure hulls lie parallel with a third, smaller pressure hull above them (which protrudes just below the sail), and two other pressure hulls for torpedoes and steering gear. This also greatly increases their survivability - even if one pressure hull is breached, the crew members in the other are safe and there is less potential for flooding.

The Typhoon class was developed under Project 941 as the Russian Akula class (Акула), meaning shark
Shark
Sharks are a type of fish with a full cartilaginous skeleton and a highly streamlined body. The earliest known sharks date from more than 420 million years ago....
. It is sometimes confused with other submarines, as Akula is the name NATO uses to designate the Russian Project 971 Shchuka-B
Akula class submarine
Project 971 Щука-Б , is a nuclear-powered attack submarine first deployed by the Soviet Navy in 1986...
(Щука-Б) class attack submarines. The project was developed with the objective to match the SLBM armament of Ohio class submarine
Ohio class submarine
The Ohio class is a class of nuclear-powered submarines used by the United States Navy. The United States has 18 Ohio-class submarines:...
s, capable of carrying 192 nuclear warheads, 100 kt each (as 24 UGM-96 Trident I
UGM-96 Trident I
The UGM-96 Trident I, or Trident C4 was an American Submarine-launched ballistic missile, built by Lockheed Martin Space Systems in Sunnyvale, California. First deployed in 1979, the Trident I replaced the Poseidon missile. It was retired in the Early 21st Century, having been replaced by the...
missiles). However, at the time, state-of-the-art Soviet SLBMs were substantially larger and heavier than their American counterparts (the R-39 is more than two times heavier than the Trident I; it remains the heaviest SLBM in service worldwide). The submarine had to be scaled accordingly.

Six Typhoon class submarines were built. Originally, the submarines were designated by hull numbers only. Names were later assigned to the four vessels retained by the Russian Navy, which were sponsored by either a city or company. The construction order for an additional vessel (hull number TK-210) was canceled and never completed. Only the first of these submarines to be constructed, the Dmitriy Donskoy, is still in active service with the Russian Navy, serving as a test platform for the Bulava (SS-NX-32) missile which is currently under development. The Arkhangelsk (TK-17) and Severstal (TK-20) remain commissioned, though not currently active with the Russian fleet. All the R-39 missiles have been retired. The Typhoons are slated to be replaced by the Borei class
Borei class submarine
The Borei class is a class of nuclear-powered ballistic missile submarine produced and operated by the Russian Navy. The class is intended to replace the Delta III, Delta IV and Typhoon classes now in Russian Navy service...
starting in 2010-11.

In late December 2008, a senior Navy official announced that the two Typhoon-class submarines, the TK-17 and TK-20, that are in reserve would not be rearmed with the new Bulava SLBM missile system. They could however be modified to carry cruise missile
Cruise missile
A cruise missile is a guided missile that carries an explosive payload and is propelled, usually by a jet engine, towards a land-based or sea-based target. Cruise missiles are designed to deliver a large warhead over long distances with high accuracy...
s or to lay mines, or could be used in special operations. In late June 2009, the Navy Commander-in-Chief, Admiral Vladimir Vysotsky
Vladimir Vysotsky (Admiral)
Vladimir Sergeyevich Vysotskiy , Volodymyr Serhiyovych Vysotskiy; is a Russian admiral and former Commander of the Russian Northern Fleet...
told reporters that the two submarines would be reserved for possible future repairs and modernization.
In May 2010 the Navy Commander-in-Chief reported that Russia's Typhoon-class submarines would remain in service with the Navy until 2019.
In Septermber 2011, Russian defense ministry decided to write off all Project 941 Akula nuclear-powered ballistic missile submarines till 2014. The reason for decommission of the world's largest submarines are restrictions imposed on Russia by Strategic Arms Reduction Treaty and successful trials of new Borei class submarine
Borei class submarine
The Borei class is a class of nuclear-powered ballistic missile submarine produced and operated by the Russian Navy. The class is intended to replace the Delta III, Delta IV and Typhoon classes now in Russian Navy service...
.

The Submarine Cargo Vessel is a proposed idea by the Rubin Design Bureau
Rubin Design Bureau
Rubin Central Design Bureau for Marine Engineering in Saint Petersburg is one of the main Russian centers of submarine design, having designed more than two-thirds of all nuclear submarines in the Russian Navy...
where a Typhoon has its missile launchers removed and replaced with cargo holds. The projected cargo capacity of this configuration is 15000 tonnes (14,763.1 LT).

Two to four units (depending on the satellite map service you click) visible in the waters of the naval base/submarine manufacturing/scrap base of Severodvinsk
Severodvinsk
Severodvinsk is a city in the north of Arkhangelsk Oblast, Russia, located in the delta of the Northern Dvina River, west of Arkhangelsk. Administratively, it is incorporated as a town of oblast significance . Municipally, it is incorporated as Severodvinsk Urban Okrug. The city was founded as...
, Russia
Russia
Russia or , officially known as both Russia and the Russian Federation , is a country in northern Eurasia. It is a federal semi-presidential republic, comprising 83 federal subjects...

One to three units (depending on the satellite map service you click) visible in the waters of the Zapadnaya Litsa
Zapadnaya Litsa
Zapadnaya Litsa is the largest and most important Russian naval base built for the Northern Fleet. The base is located far in the north of Russia, on the Litsa Fjord at the westernmost point of the Kola Peninsula...
naval base on the Kola peninsula
Kola Peninsula
The Kola Peninsula is a peninsula in the far northwest of Russia. Constituting the bulk of the territory of Murmansk Oblast, it lies almost completely to the north of the Arctic Circle and is washed by the Barents Sea in the north and the White Sea in the east and southeast... 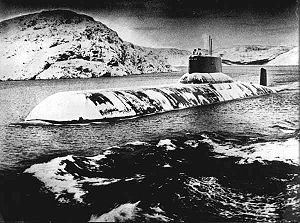 In the novel, the Red October used a drive system consisting of long shafts cut through the hull with no moving parts inside them, called a tunnel drive or caterpillar drive. In the movie, the caterpillar drive was instead said to be a magnetohydrodynamic drive
Magnetohydrodynamic drive
A magnetohydrodynamic drive or MHD propulsor is a method for propelling seagoing vessels using only electric and magnetic fields with no moving parts, using magnetohydrodynamics. The working principle involves electrification of the propellant which can then be directed by a magnetic field,...
. In both the novel and the movie, the drive was said to be near-silent; this made the Red October a perfect platform for launching depressed-trajectory ballistic missiles at the United States.

The movie features the Red October as an upgraded Typhoon class submarine with additional length and a towed array sonar
Towed array sonar
A towed array sonar is a sonar array that is towed behind a submarine or surface ship. It is basically a long cable, up to 5 km, with hydrophones that is trailed behind the ship when deployed. The hydrophones are placed at specific distances along the cable...
(the distinctive "bulb" seen on top of the rudder houses).

In 2008 National Geographic released a documentary about the scrapping of one of the Typhoons in the series "Break It Down". This ship is TK-13, which was scrapped over the time period 2007-2009.