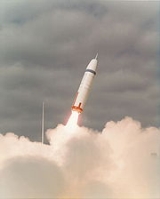 The UGM-96 Trident I, or Trident C4 was an American
United States
The United States of America is a federal constitutional republic comprising fifty states and a federal district...
Submarine-launched ballistic missile
Submarine-launched ballistic missile
A submarine-launched ballistic missile is a ballistic missile capable of delivering a nuclear warhead that can be launched from submarines. Modern variants usually deliver multiple independently targetable reentry vehicles each of which carries a warhead and allows a single launched missile to...
, built by Lockheed Martin Space Systems
Lockheed Martin Space Systems
Lockheed Martin Space Systems Company is one of the four major business divisions of Lockheed Martin. It is headquartered in Denver, Colorado with additional sites in Sunnyvale, California; Newtown, Pennsylvania; Huntsville, Alabama; and elsewhere in the US and UK...
in Sunnyvale, California
Sunnyvale, California
Sunnyvale is a city in Santa Clara County, California, United States. It is one of the major cities that make up the Silicon Valley located in the San Francisco Bay Area...
. First deployed in 1979, the Trident I replaced the Poseidon
UGM-73 Poseidon
The Poseidon missile was the second US Navy ballistic missile system, powered by a two-stage solid fuel rocket. It succeeded the Polaris missile beginning in 1972, bringing major advances in warheads and accuracy...
missile. It was retired in the Early 21st Century, having been replaced by the Trident II
UGM-133 Trident II
UGM-133 Trident II, or Trident D5 is a submarine-launched ballistic missile, built by Lockheed Martin Space Systems in Sunnyvale, California, and deployed with the US Navy and Royal Navy. It was first deployed in 1990, and is still in service....
. In 1980, the Royal Navy
Royal Navy
The Royal Navy is the naval warfare service branch of the British Armed Forces. Founded in the 16th century, it is the oldest service branch and is known as the Senior Service...
requested Trident I missiles under the Polaris Sales Agreement
Polaris Sales Agreement
The Polaris Sales Agreement was an agreement between the United States and the United Kingdom which formally arranged for the Polaris missile system to be provided to the UK to maintain its independent nuclear deterrent. The arrangement had been set up in principle as a result of the Nassau Agreement...
, however in 1982, this was changed to Trident IIs. It was the first Trident missile to enter service.

The Trident I is a three-stage, solid-fuelled
Solid rocket
A solid rocket or a solid-fuel rocket is a rocket engine that uses solid propellants . The earliest rockets were solid-fuel rockets powered by gunpowder; they were used by the Chinese in warfare as early as the 13th century and later by the Mongols, Arabs, and Indians.All rockets used some form of...
missile. 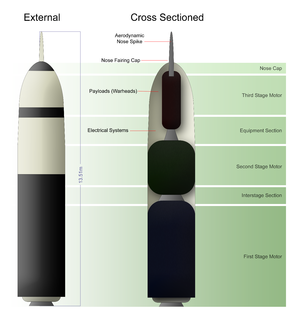