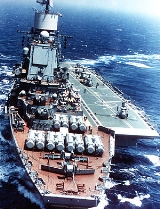 Encyclopedia
Admiral Gorshkov was a modified Kiev class aircraft carrier
Kiev class aircraft carrier
The Kiev class carriers were the first class of fixed-wing aircraft carriers built in the Soviet Union....
of the Russian Navy, originally named Baku. Sometimes Gorshkov is considered a separate class due to its improvements including a phased array radar, extensive electronic warfare installations, and an enlarged command and control suite. In 2004, she was sold to India for conversion into a STOBAR
STOBAR
STOBAR is a system used for the launch and recovery of aircraft from the deck of an aircraft carrier, combining elements of both STOVL and CATOBAR .Aircraft launch under their own power using a ski-jump to assist take-off STOBAR (Short Take Off But Arrested Recovery) is a system used for the...
carrier now named INS Vikramaditya
INS Vikramaditya
INS Vikramaditya is the new name for the former Soviet aircraft carrier Admiral Gorshkov, which has been procured by India, and is estimated to enter service in the Indian Navy after 2012....
.

The ship was laid down in 1978 at Nikolayev South (Shipyard No.444)
Black Sea Shipyard
The Black Sea Shipyard is located in Mykolaiv, Ukraine and is the largest shipyard with near direct access to the Black Sea. It is most often referred to as the Nikolayev South Shipyard and was known as Soviet Shipyard No...
in Ukraine, launched in 1982, and commissioned in 1987. The delay in commissioning was largely caused by software bugs in the new command and control system.

The ship was renamed Admiral Gorshkov after the collapse of the Soviet Union
Soviet Union
The Soviet Union , officially the Union of Soviet Socialist Republics , was a constitutionally socialist state that existed in Eurasia between 1922 and 1991....
in 1991, as the city of Baku
Baku
Baku , sometimes spelled as Baki or Bakou, is the capital and largest city of Azerbaijan, as well as the largest city on the Caspian Sea and of the Caucasus region. It is located on the southern shore of the Absheron Peninsula, which projects into the Caspian Sea. The city consists of two principal...
was now in independent Azerbaijan
Azerbaijan
Azerbaijan , officially the Republic of Azerbaijan is the largest country in the Caucasus region of Eurasia. Located at the crossroads of Western Asia and Eastern Europe, it is bounded by the Caspian Sea to the east, Russia to the north, Georgia to the northwest, Armenia to the west, and Iran to...
. Sergey Gorshkov
Sergey Gorshkov
Admiral of the Fleet of the Soviet Union Sergey Georgiyevich Gorshkov was a Soviet naval officer during the Cold War who oversaw the expansion of the Soviet Navy into a global force....
was responsible for the expansion of the Soviet Navy during the Cold War.

In 1994, following a boiler room explosion, the ship was docked for a year of repairs. Although she returned to service in 1995, she was finally withdrawn in 1996 and offered for sale.

On December 17, 2009, it was reported that India and Russia ended the stalemate over Gorshkov price deal by agreeing on a price of USD 2.3-billion

The fourth of the Project 1143 aircraft carrying cruisers, Baku had many differences to the rest of the class, trialing technologies to be used on the Admiral Kuznetsov. The most obvious is the massive planar array above the bridge. This was the antenna for the Mars-Passat ("Sky Watch") 3D air search radar, comparable to the US SCANFAR
SCANFAR
The Hughes SCANFAR system was the first deployed United States Navy phased array radar system installed on the USS Long Beach and USS Enterprise. It consisted of two search radars, the AN/SPS-32 and the AN/SPS-33. In 1982, the system was removed from Long Beach, and was replaced by the AN/SPS-48...
radar if not the AN/SPY-1
AN/SPY-1
The AN/SPY-1 is a US naval radar system manufactured by Lockheed Martin. The array is a passive electronically scanned system and is a key component of the Aegis Combat System. The system is computer controlled, using four complementary antennas to provide 360 degree coverage...
used by the Aegis combat system
Aegis combat system
The Aegis Combat System is an integrated naval weapons system developed by the Missile and Surface Radar Division of RCA, and now produced by Lockheed Martin...
. Like SCANFAR, Sky Watch proved troublesome and was probably never operational.

The biggest change to the weapon systems was the replacement of the SA-N-3 Goblet and SA-N-4
9K33 Osa
The 9K33 OSA is a highly mobile, low-altitude, short-range tactical surface-to-air missile system. "9K33" is its GRAU designation. Its NATO reporting name is SA-8 Gecko.-Description:...
Gecko SAM launchers with four SA-N-9 Gauntlet VLS launchers. This allowed room for another two SS-N-12 Sandbox launchers. The two AA guns of the Kievs were replaced with 100 mm guns, and the SUW-N-1 launcher was removed.

The air wing was the same as the other Kievs, consisting of a squadron of twelve Yak-38 'Forger'
Yakovlev Yak-38
The Yakovlev Yak-38 was Soviet Naval Aviation's first and only operational VTOL strike fighter aircraft, in addition to being its first operational carrier-based fixed-wing aircraft...
V/STOL
V/STOL
Vertical and/or short take-off and landing is a term used to describe aircraft that are able to take-off or land vertically or on short runways. Vertical takeoff and landing describes craft which do not require runways at all...
aircraft (until they were retired in 1992), twelve Ka-27 'Helix-A'
Kamov Ka-27
|-See also:-External links:*...
ASW/SAR helicopter
Helicopter
A helicopter is a type of rotorcraft in which lift and thrust are supplied by one or more engine-driven rotors. This allows the helicopter to take off and land vertically, to hover, and to fly forwards, backwards, and laterally...
s and two Ka-31 'Helix' AEW
Airborne Early Warning
An airborne early warning and control system is an airborne radar system designed to detect aircraft at long ranges and control and command the battle space in an air engagement by directing fighter and attack plane strikes...
helicopters. Flight operations were assisted by the distinctive new Cake Stand TACAN
Tactical Air Navigation
A tactical air navigation system, commonly referred to by the acronym TACAN, is a navigation system used by military aircraft. It provides the user with bearing and distance to a ground or ship-borne station. It is a more accurate version of the VOR/DME system that provides bearing and range...
radar.

Baku was used for trials of the Yak-141 Freestyle
Yakovlev Yak-141
The Yakovlev Yak-141 , also known as the Yak-41, is a supersonic vertical takeoff/landing fighter aircraft designed by Yakolev. It did not enter production.-Design and development:...
supersonic VTOL fighter.