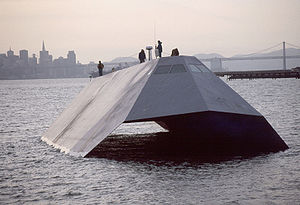 A stealth ship is a ship
Ship
Since the end of the age of sail a ship has been any large buoyant marine vessel. Ships are generally distinguished from boats based on size and cargo or passenger capacity. Ships are used on lakes, seas, and rivers for a variety of activities, such as the transport of people or goods, fishing,...
which employs stealth technology
Stealth technology
Stealth technology also termed LO technology is a sub-discipline of military tactics and passive electronic countermeasures, which cover a range of techniques used with personnel, aircraft, ships, submarines, and missiles, to make them less visible to radar, infrared, sonar and other detection...
construction techniques in an effort to ensure that it is harder to detect by one or more of radar
Radar
Radar is an object-detection system which uses radio waves to determine the range, altitude, direction, or speed of objects. It can be used to detect aircraft, ships, spacecraft, guided missiles, motor vehicles, weather formations, and terrain. The radar dish or antenna transmits pulses of radio...
, visual, sonar
Sonar
Sonar is a technique that uses sound propagation to navigate, communicate with or detect other vessels...
, and infrared methods. These techniques borrow from stealth aircraft
Stealth aircraft
Stealth aircraft are aircraft that use stealth technology to avoid detection by employing a combination of features to interfere with radar as well as reduce visibility in the infrared, visual, audio, and radio frequency spectrum. Development of stealth technology likely began in Germany during...
technology, although some aspects such as wake and acoustic signature
Acoustic signature
Acoustic signature is used to describe a combination of acoustic emissions of ships and submarines.-Contributing factors:The acoustic signature is made up of a number of individual elements...
reduction are unique to stealth ships' design.

Reduction of radar cross section
Radar cross section
Radar cross section is a measure of how detectable an object is with a radar. A larger RCS indicates that an object is more easily detected.An object reflects a limited amount of radar energy...
(RCS), visibility and noise is not unique to stealth ships; visual masking has been employed for over two centuries and RCS reduction traces back to American and Soviet ships of the Cold War
Cold War
The Cold War was the continuing state from roughly 1946 to 1991 of political conflict, military tension, proxy wars, and economic competition between the Communist World—primarily the Soviet Union and its satellite states and allies—and the powers of the Western world, primarily the United States...
. One common feature is the inward-sloping tumblehome
Tumblehome
In ship designing, the tumblehome is the narrowing of a ship's hull with greater distance above the water-line. Expressed more technically, it is present when the beam at the uppermost deck is less than the maximum beam of the vessel....
hull design that significantly reduces the RCS.


Visby is designed to elude visual detection, radar detection, acoustic detection, and infrared detection. Its surface is constructed from a carbon fibre reinforced plastic. Avoidance of right angles in the design results in a smaller radar signature, reducing the ship's detection range.

Britain's Type 45 anti-air warfare destroyer
Type 45 destroyer
The United Kingdom's Type 45 destroyer is an air defence destroyer programme of the Royal Navy which will replace its Type 42 destroyers. The first ship in the class, HMS Daring, was launched on 1 February 2006 and commissioned on 23 July 2009. The ships are now built by BAE Systems Surface Ships...
has similarities to the Visby class, but is much more conventional, employing traditional steel instead of carbon fibre. Like Visby, its design reduces the use of right angles.

The currently developed U.S. Zumwalt-class destroyer
Zumwalt class destroyer
The Zumwalt class destroyer is a planned class of United States Navy destroyers, designed as multi-mission ships with a focus on land attack. The class is a scaled-back project that emerged after funding cuts to the larger DD-21 vessel program. The program was previously known as the "DD"...
— or DD(X) — is the US version of a stealth ship. Sea Shadow, which utilizes both tumblehome and SWATH features, was an early U.S. exploration of stealth ship technology. The Arleigh Burke-class destroyer
Arleigh Burke class destroyer
The Arleigh Burke class of guided missile destroyers is the United States Navy's first class of destroyer built around the Aegis combat system and the SPY-1D multi-function phased array radar. The class is named for Admiral Arleigh "31-Knot" Burke, the most famous American destroyer officer of...
also employs stealth technology without being a full stealth ship, similar to the German designs.


Ady Gil, operated by the Sea Shepherd Conservation Society, was painted with what the owners claimed to be radar-absorbent material. Thus, Ady Gil would have been a rare case of a non-military vessel employing stealth technology.

In designing a ship with reduced radar signature, the main concerns are radar beams originating near or slightly above the horizon (as seen from the ship) coming from distant patrol aircraft, other ships or sea-skimming anti-ship missiles with active radar seekers
Active radar homing
Active radar homing is a missile guidance method in which a guided missile contains a radar transceiver and the electronics necessary for it to find and track its target autonomously...
. Therefore, the shape of the ship avoids vertical surfaces, which would perfectly reflect any such beams directly back to the emitter. Retro-reflective right angles are eliminated to avoid causing the cat's eye
Corner reflector
A corner reflector is a retroreflector consisting of three mutually perpendicular, intersecting flat surfaces, which reflects waves back directly towards the source, but shifted . Unlike a simple mirror, they work for a relatively wide-angle field of view. The three intersecting surfaces often have...
effect. A stealthy ship shape can be achieved by constructing the hull and superstructure with a series of slightly protruding and retruding surfaces. This design was developed by several German
Germany
Germany , officially the Federal Republic of Germany , is a federal parliamentary republic in Europe. The country consists of 16 states while the capital and largest city is Berlin. Germany covers an area of 357,021 km2 and has a largely temperate seasonal climate...
shipyards, and is thus extensively applied on ships of the German Navy
German Navy
The German Navy is the navy of Germany and is part of the unified Bundeswehr .The German Navy traces its roots back to the Imperial Fleet of the revolutionary era of 1848 – 52 and more directly to the Prussian Navy, which later evolved into the Northern German Federal Navy...
. 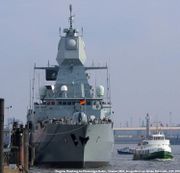