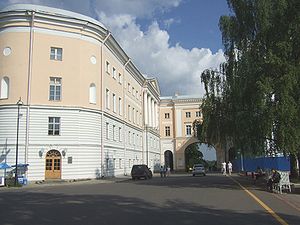 The Imperial Lyceum
Lyceum
The lyceum is a category of educational institution defined within the education system of many countries, mainly in Europe. The definition varies between countries; usually it is a type of secondary school.-History:...
in Tsarskoye Selo
Tsarskoye Selo
Tsarskoye Selo is the town containing a former Russian residence of the imperial family and visiting nobility, located south from the center of St. Petersburg. It is now part of the town of Pushkin and of the World Heritage Site Saint Petersburg and Related Groups of Monuments.-History:In...
near Saint Petersburg
Saint Petersburg
Saint Petersburg is a city and a federal subject of Russia located on the Neva River at the head of the Gulf of Finland on the Baltic Sea...
also known historically as the Imperial Alexander Lyceum after its founder the Emperor Alexander I
Alexander I of Russia
Alexander I of Russia , served as Emperor of Russia from 23 March 1801 to 1 December 1825 and the first Russian King of Poland from 1815 to 1825. He was also the first Russian Grand Duke of Finland and Lithuania....
with the object of educating youths of the best families, who should afterwards occupy important posts in the Imperial service.

Its regulations were published on 11 January 1811, but they had received the Imperial sanction on 12 August 1810, when the four-storied "new" wing of the Great Palace was appointed for its accommodation, with special premises for a hospital, a kitchen and other domestic requirements, as well as a residence for the administrative staff. Furniture and utensils were given with the Neoclassical
Neoclassical architecture
Neoclassical architecture was an architectural style produced by the neoclassical movement that began in the mid-18th century, manifested both in its details as a reaction against the Rococo style of naturalistic ornament, and in its architectural formulas as an outgrowth of some classicizing...
building, designed by Vasily Stasov
Vasily Stasov
Vasily Petrovich Stasov was a Russian architect.-Biography:Stasov was born in Moscow....
, next to the Catherine Palace
Catherine Palace
The Catherine Palace was the Rococo summer residence of the Russian tsars, located in the town of Tsarskoye Selo , 25 km south-east of St. Petersburg, Russia.- History :...
.

The Tsarskoye Selo Lyceum was opened on October 19, 1811. The first graduates were all brilliant and included Alexander Pushkin and Alexander Gorchakov. The opening date was celebrated each year with carousals and revels, and Pushkin composed new verses for each of those occasions. In January 1844 the Lyceum was moved to St Petersburg.

During the 33 years of the Tsarskoye Selo Lyceum's existence, there were 286 graduates. The most famous of these, in addition to the above two, were Anton Delvig, Wilhelm Kuchelbecker
Wilhelm Küchelbecker
Wilhelm Küchelbecker was a Russian Romantic poet and Decembrist....
, Nicholas de Giers
Nicholas de Giers
Nicholas de Giers was a Russian Foreign Minister during the reign of Alexander III. He was one of the architects of the Franco-Russian Alliance, which was later transformed into the Triple Entente.- Biography :...
, Dmitriy Tolstoy, Jacob Grot, Nikolay Danilevsky, Aleksey Lobanov-Rostovsky, Fyodor Shcherbatskoy
Fyodor Shcherbatskoy
Fyodor Ippolitovich Shcherbatskoy or Stcherbatsky , often referred to in the literature as F. Th. Stcherbatsky, was a Russian Indologist who, in large part, was responsible for laying the foundations in the Western world for the scholarly study of Buddhist philosophy...
, and Mikhail Saltykov-Shchedrin
Mikhail Saltykov-Shchedrin
Mikhail Yevgrafovich Saltykov-Shchedrin , better known by his pseudonym Shchedrin , was a major Russian satirist of the 19th century. At one time, after the death of the poet Nikolai Nekrasov, he acted as editor of the well-known Russian magazine, the Otechestvenniye Zapiski, until it was banned by...
.