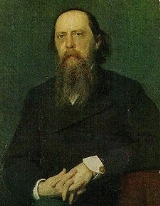 Encyclopedia
Mikhail Yevgrafovich Saltykov-Shchedrin ' onMouseout='HidePop("73921")' href="/topics/Tver">Tver
Tver
Tver is a city and the administrative center of Tver Oblast, Russia. Population: 403,726 ; 408,903 ;...
Guberniya – in Saint Petersburg
Saint Petersburg
Saint Petersburg is a city and a federal subject of Russia located on the Neva River at the head of the Gulf of Finland on the Baltic Sea...
), better known by his pseudonym Shchedrin (Щедрин), was a major Russia
Russia
Russia or , officially known as both Russia and the Russian Federation , is a country in northern Eurasia. It is a federal semi-presidential republic, comprising 83 federal subjects...
n satirist
Satire
Satire is primarily a literary genre or form, although in practice it can also be found in the graphic and performing arts. In satire, vices, follies, abuses, and shortcomings are held up to ridicule, ideally with the intent of shaming individuals, and society itself, into improvement...
of the 19th century. At one time, after the death of the poet Nikolai Nekrasov
Nikolai Alekseevich Nekrasov
Nikolay Alexeyevich Nekrasov was a Russian poet, writer, critic and publisher, whose deeply compassionate poems about peasant Russia won him Fyodor Dostoyevsky's admiration and made him the hero of liberal and radical circles of Russian intelligentsia, as represented by Vissarion Belinsky and...
, he acted as editor of the well-known Russian magazine, the Otechestvenniye Zapiski, until it was banned by the government in 1884. His best known work is the novel The Golovlyov Family (1876).

A scion of the ancient Saltykov
Saltykov
Saltykov was a Russian noble family. Notable members of the family include:* Alexander Saltykov** Alexander Mikhailovich Saltykov , a Russian writer and translator** Prince Alexander Nikolayevich Saltykov , a Russian statesman...
family, Mikhail Saltykov was born on his father’s estate in the province of Tula
Tula, Russia
Tula is an industrial city and the administrative center of Tula Oblast, Russia. It is located south of Moscow, on the Upa River. Population: -History:...
. His early education was neglected, and his youth, owing to the severity and the domestic quarrels of his parents, had many melancholy experiences. Largely neglected, he developed a love for reading, though the only book in his father’s house was the Bible
Bible
The Bible refers to any one of the collections of the primary religious texts of Judaism and Christianity. There is no common version of the Bible, as the individual books , their contents and their order vary among denominations...
, which he studied attentively.

At ten years of age he entered the Moscow Institute for sons of the nobility, and subsequently the Lyceum
Lyceum
The lyceum is a category of educational institution defined within the education system of many countries, mainly in Europe. The definition varies between countries; usually it is a type of secondary school.-History:...
at Saint Petersburg
Saint Petersburg
Saint Petersburg is a city and a federal subject of Russia located on the Neva River at the head of the Gulf of Finland on the Baltic Sea...
, where Prince Lobanov-Rostovsky, afterwards minister for foreign affairs, was one of his schoolfellows. While there he published poetry, and translations of some of the works of Lord Byron
George Gordon Byron, 6th Baron Byron
George Gordon Byron, 6th Baron Byron, later George Gordon Noel, 6th Baron Byron, FRS , commonly known simply as Lord Byron, was a British poet and a leading figure in the Romantic movement...
and Heinrich Heine
Heinrich Heine
Christian Johann Heinrich Heine was one of the most significant German poets of the 19th century. He was also a journalist, essayist, and literary critic. He is best known outside Germany for his early lyric poetry, which was set to music in the form of Lieder by composers such as Robert Schumann...
, and on graduating the Lyceum he obtained employment as a clerk for the Ministry of War.

During 1854 he published A Complicated Affair, which, because of the revolutionary activity at that time in France
France
The French Republic , The French Republic , The French Republic , (commonly known as France , is a unitary semi-presidential republic in Western Europe with several overseas territories and islands located on other continents and in the Indian, Pacific, and Atlantic oceans. Metropolitan France...
and Germany
Germany
Germany , officially the Federal Republic of Germany , is a federal parliamentary republic in Europe. The country consists of 16 states while the capital and largest city is Berlin. Germany covers an area of 357,021 km2 and has a largely temperate seasonal climate...
, was the cause of his banishment to Vyatka
Kirov, Kirov Oblast
Kirov , formerly known as Vyatka and Khlynov, is a city in northeastern European Russia, on the Vyatka River, and the administrative center of Kirov Oblast. Population: -History:...
, where he spent eight years as a minor government official. This experience enabled him to study the life and habits of civil servants in the interior, and to give a clever description of Russian provincial officials in his Provincial Sketches.

On his return to Saint Petersburg he was soon promoted to administrative posts of considerable importance. After making a report on the condition of the Russian police
Police
The police is a personification of the state designated to put in practice the enforced law, protect property and reduce civil disorder in civilian matters. Their powers include the legitimized use of force...
, he was appointed deputy governor, first of Ryazan
Ryazan
Ryazan is a city and the administrative center of Ryazan Oblast, Russia. It is located on the Oka River southeast of Moscow. Population: The strategic bomber base Dyagilevo is just west of the city, and the air base of Alexandrovo is to the southeast as is the Ryazan Turlatovo Airport...
and then of Tver
Tver
Tver is a city and the administrative center of Tver Oblast, Russia. Population: 403,726 ; 408,903 ;...
. His predilection for literary work induced him to end his government service, but pecuniary difficulties soon compelled him to re-enter it, and in 1864 he was appointed president of the local boards of taxation successively at Penza
Penza
-Honors:A minor planet, 3189 Penza, discovered by Soviet astronomer Nikolai Stepanovich Chernykh in 1978, is named after the city.-Notable residents:...
, Tula and Ryazan.

In 1868 he finally quit the civil service. Subsequently he wrote his principal works, namely, The Old Times of Poshekhonye
Poshekhonye
Poshekhonye is a town and the administrative center of Poshekhonsky District of Yaroslavl Oblast, Russia, located northwest of Yaroslavl. It stands on the Sogozha River . Population:...
, which possesses a certain autobiographical interest, The History of a Town, a satirical allegory of Russian history, Messieurs et Mesdames Pompadours; and his only novel, The Golovlyov Family (also translated as House of Greed or A Family of Noblemen). The latter book, often considered his masterpiece, is a study of overpowering greed.

Saltykov's last publication was a collection of satirical fable
Fable
A fable is a succinct fictional story, in prose or verse, that features animals, mythical creatures, plants, inanimate objects or forces of nature which are anthropomorphized , and that illustrates a moral lesson , which may at the end be expressed explicitly in a pithy maxim.A fable differs from...
s and tales
Fairy tale
A fairy tale is a type of short story that typically features such folkloric characters, such as fairies, goblins, elves, trolls, dwarves, giants or gnomes, and usually magic or enchantments. However, only a small number of the stories refer to fairies...
. He died in Saint Petersburg and was interred in the Literary Cemetery. "The sole object of my literary work," wrote Saltykov-Shchedrin, "was unfailingly to protest against greed, hypocrisy, falsehood, theft, treachery, stupidity of modern Russians".

The greater part of Saltykov's work is a rather nondescript kind of satirical journalism
Journalism
Journalism is the practice of investigation and reporting of events, issues and trends to a broad audience in a timely fashion. Though there are many variations of journalism, the ideal is to inform the intended audience. Along with covering organizations and institutions such as government and...
, generally with little or no narrative structure, and intermediate in form between the classical "character" and the contemporary feuilleton
Feuilleton
Feuilleton was originally a kind of supplement attached to the political portion of French newspapers, consisting chiefly of non-political news and gossip, literature and art criticism, a chronicle of the latest fashions, and epigrams, charades and other literary trifles...
. Greatly popular though it was in its own time, it has since lost much of its appeal simply because it satirizes social conditions that have long ceased to exist and much of it has become unintelligible without commentary.

During 1869-70 he published The History of a Town, which sums up the achievement of Saltykov's first period. It is a sort of parody of Russian history, concentrated in the microcosm of a provincial town, whose successive governors are transparent caricatures of Russian sovereigns and ministers, and whose very name is representative of its qualities: Glupov (literally, Sillytown).

Most works of Saltykov's later period are written in a language that the satirist himself called Aesop
Aesop
Aesop was a Greek writer credited with a number of popular fables. Older spellings of his name have included Esop and Isope. Although his existence remains uncertain and no writings by him survive, numerous tales credited to him were gathered across the centuries and in many languages in a...
ic. It is one continuous circumlocution because of censorship and requires a constant reading commentary. The style, moreover, is based on the bad journalistic style of the period, which originated largely with Osip Senkovsky
Osip Senkovsky
Józef Julian Sękowski was a Polish-Russian orientalist, journalist, and entertainer.Józef Sękowski was born into an old family of Polish szlachta. During his study in the University of Vilno he became fascinated with all things oriental...
, and which today invariably produces an impression of painfully elaborate vulgarity.

The Golovlyov Family was decried by D. S. Mirsky
D. S. Mirsky
D.S. Mirsky is the English pen-name of Dmitry Petrovich Svyatopolk-Mirsky , often known as Prince Mirsky , a Russian political and literary historian who promoted the knowledge and translations of Russian literature in Britain and of English literature in the Soviet Union.-Life:A scion of the...
as the gloomiest book in all Russian literature—all the more gloomy because the effect is attained by the simplest means without any theatrical, melodramatic, or atmospheric effects. The most remarkable character of this novel is Porfiry Golovlyov, nicknamed 'Little Judas', the empty and mechanical hypocrite who cannot stop talking unctuous and meaningless humbug, not for any inner need or outer profit, but because his tongue is in need of constant exercise.