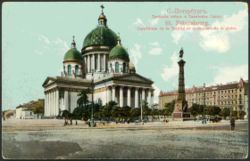 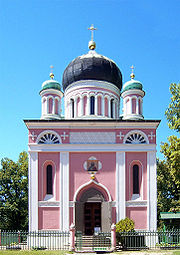 Vasily Petrovich Stasov (Russian: Васи́лий Петро́вич Ста́сов; 4 August 1769 – 5 September 1848) was a Russia
Russia
Russia or , officially known as both Russia and the Russian Federation , is a country in northern Eurasia. It is a federal semi-presidential republic, comprising 83 federal subjects...
n architect
Architect
An architect is a person trained in the planning, design and oversight of the construction of buildings. To practice architecture means to offer or render services in connection with the design and construction of a building, or group of buildings and the space within the site surrounding the...
.

He extensively travelled in France
France
The French Republic , The French Republic , The French Republic , (commonly known as France , is a unitary semi-presidential republic in Western Europe with several overseas territories and islands located on other continents and in the Indian, Pacific, and Atlantic oceans. Metropolitan France...
and Italy
Italy
Italy , officially the Italian Republic languages]] under the European Charter for Regional or Minority Languages. In each of these, Italy's official name is as follows:;;;;;;;;), is a unitary parliamentary republic in South-Central Europe. To the north it borders France, Switzerland, Austria and...
, where he became professor at the St Luke Academy in Rome
Rome
Rome is the capital of Italy and the country's largest and most populated city and comune, with over 2.7 million residents in . The city is located in the central-western portion of the Italian Peninsula, on the Tiber River within the Lazio region of Italy.Rome's history spans two and a half...
. On his return home, he was elected to the Imperial Academy of Arts
Imperial Academy of Arts
The Russian Academy of Arts, informally known as the St. Petersburg Academy of Arts, was founded in 1757 by Ivan Shuvalov under the name Academy of the Three Noblest Arts. Catherine the Great renamed it the Imperial Academy of Arts and commissioned a new building, completed 25 years later in 1789...
(1811). One of his early works, the Gruzino
Gruzino
The Gruzino estate near Chudovo, Russia, was constructed by a team of Neoclassical architects under Vasily Petrovich Stasov for Count Alexey Arakcheyev in the 1810s....
estate near Novgorod, was built for Count Alexey Arakcheyev in the 1810s and was completely destroyed during World War II
World War II
World War II, or the Second World War , was a global conflict lasting from 1939 to 1945, involving most of the world's nations—including all of the great powers—eventually forming two opposing military alliances: the Allies and the Axis...
.

While developing guidelines for other architects, Stasov advocated making even the most trivial of buildings—barracks, storehouses, stables—look imposing and monumental. He worked much to embellish Tsarskoe Selo, where he designed the famous Pushkin Lyceum and the fanciful Chinese Village
Chinese Village (Tsarskoe Selo)
The Chinese Village in the Alexander Park of Tsarskoye Selo, Russia was Catherine the Great's attempt to follow the 18th-century fashion for the Chinoiserie....
. After the great fire of 1820, he was entrusted to remodel in the Neoclassical
Neoclassicism
Neoclassicism is the name given to Western movements in the decorative and visual arts, literature, theatre, music, and architecture that draw inspiration from the "classical" art and culture of Ancient Greece or Ancient Rome...
style some premises of the baroque
Baroque
The Baroque is a period and the style that used exaggerated motion and clear, easily interpreted detail to produce drama, tension, exuberance, and grandeur in sculpture, painting, literature, dance, and music...
Catherine Palace
Catherine Palace
The Catherine Palace was the Rococo summer residence of the Russian tsars, located in the town of Tsarskoye Selo , 25 km south-east of St. Petersburg, Russia.- History :...
.

Stasov's first important commissions in the capital were the Transfiguration
Transfiguration Cathedral (Saint Petersburg)
Transfiguration Cathedral is an Eastern Orthodox cathedral belonging to the Diocese of St. Petersburg. It is located on Transfiguration Square , just off Liteyny Prospekt near the Chernyshevskaya metro station...
and the Trinity cathedral
Cathedral
A cathedral is a Christian church that contains the seat of a bishop...
s for the regiments of the Russian Imperial Guard
Russian Imperial Guard
The Russian Imperial Guard, officially known as the Leib Guard were military units serving as personal guards of the Emperor of Russia. Peter the Great founded the first such units following the Prussian practice in the 1690s, to replace the politically-motivated Streltsy.- Organization :The final...
. The interior decoration of the Smolny Cathedral also belongs to him.

Stasov was the forerunner of the Russian Revival
Russian Revival
The Russian Revival style is the generic term for a number of different movements within Russian architecture that arose in second quarter of the 19th century and was an eclectic melding of pre-Peterine Russian architecture and elements of Byzantine architecture.The Russian Revival style arose...
of the Nicholas I
Nicholas I of Russia
Nicholas I , was the Emperor of Russia from 1825 until 1855, known as one of the most reactionary of the Russian monarchs. On the eve of his death, the Russian Empire reached its historical zenith spanning over 20 million square kilometers...
period, with his Alexander Nevsky church in Potsdam
Potsdam
Potsdam is the capital city of the German federal state of Brandenburg and part of the Berlin/Brandenburg Metropolitan Region. It is situated on the River Havel, southwest of Berlin city centre....
(1826, complementing his Alexandrovka project in this suburb of Berlin
Berlin
Berlin is the capital city of Germany and is one of the 16 states of Germany. With a population of 3.45 million people, Berlin is Germany's largest city. It is the second most populous city proper and the seventh most populous urban area in the European Union...
) and a larger Church of the Tithes
Church of the Tithes
The Church of the Tithes or Church of the Dormition of the Virgin was the first stone church in Kiev. It was built by the order of Grand Prince Vladimir the Great between 989 and 996 by Byzantine and local workers to commemorate the Baptism of Kievan Rus' and was originally named the "Church of...
in Kiev
Kiev
Kiev or Kyiv is the capital and the largest city of Ukraine, located in the north central part of the country on the Dnieper River. The population as of the 2001 census was 2,611,300. However, higher numbers have been cited in the press....
(1828). The latter, a ponderous edifice with Byzantine and Russian features, was erected on the spot of the first church of Kievan Rus'
Kievan Rus'
Kievan Rus was a medieval polity in Eastern Europe, from the late 9th to the mid 13th century, when it disintegrated under the pressure of the Mongol invasion of 1237–1240....
and contained the relics of Saint Vladimir until its destruction by Bolsheviks in the 1930s.

During the reign of Nicholas I
Nicholas I of Russia
Nicholas I , was the Emperor of Russia from 1825 until 1855, known as one of the most reactionary of the Russian monarchs. On the eve of his death, the Russian Empire reached its historical zenith spanning over 20 million square kilometers...
, Stasov designed Moscow Triumphal Gates
Moscow Triumphal Gates
The Moscow Triumphal Gate is a Neoclassical triumphal arch in Saint Petersburg, Russia. The monument — built mainly in cast iron — was erected in 1834 -1838 in the memory of the Russian victory in the Russo-Turkish War, 1828-1829.-19th century:...
and Narva Triumphal Gate
Narva Triumphal Gate
The Narva Triumphal Arch was erected in the vast Narva Square , Saint Petersburg, in 1814 to commemorate the Russian victory over Napoleon. The wooden structure was constructed on the Narva highway with the purpose of greeting the soldiers who were returning from abroad after their victory over...
s in St Petersburg and the present-day Presidential Palace
Presidential Palace, Vilnius
The Presidential Palace , located in Vilnius Old Town, is the official office and eventual official residence of the President of Lithuania. The palace dates back to the 14th century and during its history it has undergone various reconstructions, supervised by prominent architects, including...
in Vilnius
Vilnius
Vilnius is the capital of Lithuania, and its largest city, with a population of 560,190 as of 2010. It is the seat of the Vilnius city municipality and of the Vilnius district municipality. It is also the capital of Vilnius County...
. In 1833, he was approached by the Siberia
Siberia
Siberia is an extensive region constituting almost all of Northern Asia. Comprising the central and eastern portion of the Russian Federation, it was part of the Soviet Union from its beginning, as its predecessor states, the Tsardom of Russia and the Russian Empire, conquered it during the 16th...
n Cossacks who asked him to produce a large cathedral in Omsk
Omsk
-History:The wooden fort of Omsk was erected in 1716 to protect the expanding Russian frontier along the Ishim and the Irtysh rivers against the Kyrgyz nomads of the Steppes...
. His last work of importance was the decoration of the Winter Palace
Winter Palace
The Winter Palace in Saint Petersburg, Russia, was, from 1732 to 1917, the official residence of the Russian monarchs. Situated between the Palace Embankment and the Palace Square, adjacent to the site of Peter the Great's original Winter Palace, the present and fourth Winter Palace was built and...
halls after the disastrous fire of 1837.