In the 17th century, the estate belonged to a Swedish noble. Its original Finnish
Finnish language
Finnish is the language spoken by the majority of the population in Finland Primarily for use by restaurant menus and by ethnic Finns outside Finland. It is one of the two official languages of Finland and an official minority language in Sweden. In Sweden, both standard Finnish and Meänkieli, a...
name is usually translated as "a higher ground". Max Vasmer
Max Vasmer
Max Vasmer was a Russian-born German linguist who studied problems of etymology of Indo-European, Finno-Ugric and Turkic languages and worked on history of Slavic, Baltic, Iranian, and Finno-Ugric peoples....
, on the other hand, derives this toponym from the Finnish word for island, "saari". In any case, the Finnish name came to be pronounced by the 18th-century Russians as "Sarskoye Selo", later changed to "Tsarskoye Selo" (i.e., "the royal village").

In 1708, Peter the Great
Peter I of Russia
Peter the Great, Peter I or Pyotr Alexeyevich Romanov Dates indicated by the letters "O.S." are Old Style. All other dates in this article are New Style. ruled the Tsardom of Russia and later the Russian Empire from until his death, jointly ruling before 1696 with his half-brother, Ivan V...
gave the estate to his wife, the future Empress Catherine I
Catherine I of Russia
Catherine I , the second wife of Peter the Great, reigned as Empress of Russia from 1725 until her death.-Life as a peasant woman:The life of Catherine I was said by Voltaire to be nearly as extraordinary as that of Peter the Great himself. There are no documents that confirm her origins. Born on...
, as a present. She founded the Blagoveschensky (Annunciation
Annunciation
The Annunciation, also referred to as the Annunciation to the Blessed Virgin Mary or Annunciation of the Lord, is the Christian celebration of the announcement by the angel Gabriel to Virgin Mary, that she would conceive and become the mother of Jesus the Son of God. Gabriel told Mary to name her...
) church there in 1724, and changed the name of the settlement to Blagoveschenskoye, but this did not stand the test of time and quickly went out of use.

It was Catherine I who started to develop the place as a royal country residence. Her daughter, Empress Elizabeth and her architect Bartolomeo Rastrelli
Bartolomeo Rastrelli
Francesco Bartolomeo Rastrelli was an Italian architect naturalized Russian. He developed an easily recognizable style of Late Baroque, both sumptuous and majestic...
were largely responsible for the building of the Catherine Palace. Later Empress Catherine II of Russia
Catherine II of Russia
Catherine II, also known as Catherine the Great , Empress of Russia, was born in Stettin, Pomerania, Prussia on as Sophie Friederike Auguste von Anhalt-Zerbst-Dornburg...
and her architect Charles Cameron
Charles Cameron (architect)
Charles Cameron was a Scottish architect who made an illustrious career at the court of Catherine II of Russia. Cameron, practitioner of early neoclassical architecture, was the chief architect of Tsarskoye Selo and Pavlovsk palaces and the adjacent new town of Sophia from his arrival in Russia in...
extended the palace building that is now known as the Cameron Gallery. Currently, there are two imperial palaces: the baroque
Baroque
The Baroque is a period and the style that used exaggerated motion and clear, easily interpreted detail to produce drama, tension, exuberance, and grandeur in sculpture, painting, literature, dance, and music...
Catherine Palace
Catherine Palace
The Catherine Palace was the Rococo summer residence of the Russian tsars, located in the town of Tsarskoye Selo , 25 km south-east of St. Petersburg, Russia.- History :...
with the adjacent Catherine Park and the neoclassical
Neoclassicism
Neoclassicism is the name given to Western movements in the decorative and visual arts, literature, theatre, music, and architecture that draw inspiration from the "classical" art and culture of Ancient Greece or Ancient Rome...
Alexander Palace
Alexander Palace
The Alexander Palace is a former imperial residence at Tsarskoye Selo, on a plateau around 30 minutes by train from St Petersburg. It is known as the favourite residence of the last Russian Emperor, Nicholas II, and his family and their initial place of imprisonment after the revolution that...
with the adjacent Alexander Park. The Catherine Palace is surrounded by a Garden à la française
Garden à la française
The French formal garden, also called jardin à la française, is a style of garden based on symmetry and the principle of imposing order over nature. It reached its apogee in the 17th century with the creation of the Gardens of Versailles, designed for Louis XIV by the landscape architect André Le...
and an English landscape garden, with such 18th-century structures as Dutch Admiralty
Dutch Admiralty
The Dutch Admiralty is the name applied to three follies designed in the traditional Dutch style and erected in summer 1773 on the bank of the Large Pond in the Catherine Park of Tsarskoe Selo. The pavilions are flanked by two towers in the Russian Gothic style...
, Creaking Pagoda
Creaking Pagoda
The Creaking Pagoda between two ponds in the landscape park separating the Catherine Palace and Alexander Palace in Tsarskoe Selo, Russia is a reference to the 18th-century taste for Chinoiserie. It was designed by Georg von Veldten. Construction lasted from 1778 to 1786. The walls are decorated...
, Chesme Column
Chesme Column
The Chesme Column in Tsarskoye Selo commemorates three Russian naval victories in the Russo-Turkish War, 1768-1774, specifically the Battle of Chesma. It was constructed in the Large Pond of the Landscape Park of the Catherine Palace to Rinaldi's designs over the years 1774-78...
, Rumyantsev Obelisk, and Marble Bridge
Marble Bridge
The Siberian Marble Gallery between Swan Islands — an artificial archipelago of seven islets in the landscape park of Tsarskoe Selo — spans a rivulet flowing between several ponds. The bridge was modelled after the Palladian Bridge in the park of Wilton House and served as a showcase for the Ural...
. The landscape Alexander Park has several Chinoiserie
Chinoiserie
Chinoiserie, a French term, signifying "Chinese-esque", and pronounced ) refers to a recurring theme in European artistic styles since the seventeenth century, which reflect Chinese artistic influences...
structures, notably the Chinese Village
Chinese Village (Tsarskoe Selo)
The Chinese Village in the Alexander Park of Tsarskoye Selo, Russia was Catherine the Great's attempt to follow the 18th-century fashion for the Chinoiserie....
.

By the end of the 18th century, Tsarskoye Selo became a popular place of summer residence among the nobility. The guards' regiments were stationed to the south of Tsarskoye Selo, where Catherine the Great founded in the 1770s the town of Sophia (her own German name being Sophie). The five-domed neoclassical Ascension Cathedral
Sophia Cathedral
The Ascension Cathedral in the town of Sophia in the vicinity of Saint Petersburg, was one of the first purely Palladian churches to be built in Russia. Rather paradoxically, it may also be defined as "the first example of Byzantinism in Russian architecture".- Construction...
, designed by the Scottish architect Charles Cameron
Charles Cameron (architect)
Charles Cameron was a Scottish architect who made an illustrious career at the court of Catherine II of Russia. Cameron, practitioner of early neoclassical architecture, was the chief architect of Tsarskoye Selo and Pavlovsk palaces and the adjacent new town of Sophia from his arrival in Russia in...
, is the chief monument of that area. In 1808, Sophia and Tsarskoye Selo merged and became one town.

In 1811, Alexander I
Alexander I of Russia
Alexander I of Russia , served as Emperor of Russia from 23 March 1801 to 1 December 1825 and the first Russian King of Poland from 1815 to 1825. He was also the first Russian Grand Duke of Finland and Lithuania....
opened the celebrated Lyceum
Tsarskoye Selo Lyceum
The Imperial Lyceum in Tsarskoye Selo near Saint Petersburg also known historically as the Imperial Alexander Lyceum after its founder the Emperor Alexander I with the object of educating youths of the best families, who should afterwards occupy important posts in the Imperial service.Its...
next door to the Catherine Palace. Among the first students of the Lyceum who graduated in 1817 were Aleksandr Pushkin
Aleksandr Pushkin
Alexander Sergeyevich Pushkin was a Russian author of the Romantic era who is considered by many to be the greatest Russian poet and the founder of modern Russian literature....
and Alexander Gorchakov. Mikhail Saltykov-Shchedrin
Mikhail Saltykov-Shchedrin
Mikhail Yevgrafovich Saltykov-Shchedrin , better known by his pseudonym Shchedrin , was a major Russian satirist of the 19th century. At one time, after the death of the poet Nikolai Nekrasov, he acted as editor of the well-known Russian magazine, the Otechestvenniye Zapiski, until it was banned by...
also graduated from the Lyceum. The Lyceum garden, the house of the Lycee Director, the house of Ludwig-Wilhelm Tepper de Ferguson
Tepper de Ferguson
Ludwig-Wilhelm Tepper de Ferguson , 10/18 December 1768, Warsaw - 12 September 1838, Paris...
, Lyceum music teacher belong to important historic sites associated with the Lyceum of Pushkin's time.

The literary traditions of Tsarskoye Selo were continued in the 20th century by such notable poets as Anna Akhmatova
Anna Akhmatova
Anna Andreyevna Gorenko , better known by the pen name Anna Akhmatova , was a Russian and Soviet modernist poet, one of the most acclaimed writers in the Russian canon.Harrington p11...
and Innokenty Annensky
Innokenty Annensky
Innokentiy Fyodorovich Annensky was a poet, critic and translator, representative of the first wave of Russian Symbolism...
.

The town escaped the 19th-century industrialization, although it was between Tsarskoye Selo and St. Petersburg that the first Russian railroad was built in 1837. It was also known for its powerful government radio station that was set up here in 1917. In the spring of 1917, Emperor Nicholas II
Nicholas II of Russia
Nicholas II was the last Emperor of Russia, Grand Prince of Finland, and titular King of Poland. His official short title was Nicholas II, Emperor and Autocrat of All the Russias and he is known as Saint Nicholas the Passion-Bearer by the Russian Orthodox Church.Nicholas II ruled from 1894 until...
was held under arrest in his favourite residence, the Alexander Palace
Alexander Palace
The Alexander Palace is a former imperial residence at Tsarskoye Selo, on a plateau around 30 minutes by train from St Petersburg. It is known as the favourite residence of the last Russian Emperor, Nicholas II, and his family and their initial place of imprisonment after the revolution that...
.

In 1918, Tsarskoye Selo (Tsar's Village) was renamed by the Bolsheviks into Detskoye Selo (Children's Village) and in 1937 it was renamed again to the town of Pushkin
Pushkin (town)
Pushkin is a municipal town in Pushkinsky District of the federal city of St. Petersburg, Russia, located south from the center of St. Petersburg proper, and its train station, Detskoye Selo, is directly connected by railway to the Vitebsky Rail Terminal of the city...
, thus commemorating the centenary of the poet's death.

On September 17, 1941 the Germans
Nazi Germany
Nazi Germany , also known as the Third Reich , but officially called German Reich from 1933 to 1943 and Greater German Reich from 26 June 1943 onward, is the name commonly used to refer to the state of Germany from 1933 to 1945, when it was a totalitarian dictatorship ruled by...
occupied the town of Pushkin, destroying and plundering many historical monuments, buildings and other cultural artifacts, including the famous Amber Room
Amber Room
The Amber Room in the Catherine Palace of Tsarskoye Selo near Saint Petersburg is a complete chamber decoration of amber panels backed with gold leaf and mirrors...
. The Red Army
Red Army
The Workers' and Peasants' Red Army started out as the Soviet Union's revolutionary communist combat groups during the Russian Civil War of 1918-1922. It grew into the national army of the Soviet Union. By the 1930s the Red Army was among the largest armies in history.The "Red Army" name refers to...
liberated the town on January 24, 1944. After the war, reconstruction began on Tsarskoye Selo; many rooms in the Catherine Palace have been restored, but much work on the palatial church and the Alexander Palace is still under way. 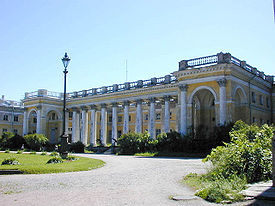