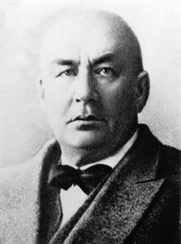 Fyodor Ippolitovich Shcherbatskoy or Stcherbatsky (Фёдор Ипполи́тович Щербатско́й) (1 October 1866 – 18 March 1942), often referred to in the literature as F. Th. Stcherbatsky, was a Russia
Russia
Russia or , officially known as both Russia and the Russian Federation , is a country in northern Eurasia. It is a federal semi-presidential republic, comprising 83 federal subjects...
n Indologist who, in large part, was responsible for laying the foundations in the Western world for the scholarly study of Buddhist philosophy. He was born in Kielce
Kielce
Kielce ) is a city in central Poland with 204,891 inhabitants . It is also the capital city of the Świętokrzyskie Voivodeship since 1999, previously in Kielce Voivodeship...
, Poland
Poland
Poland , officially the Republic of Poland , is a country in Central Europe bordered by Germany to the west; the Czech Republic and Slovakia to the south; Ukraine, Belarus and Lithuania to the east; and the Baltic Sea and Kaliningrad Oblast, a Russian exclave, to the north...
(Russian Empire), and died at the Borovoye Resort in northern Kazakhstan.

Stcherbatsky studied in the famous Imperial Lyceum at Tsarskoye Selo
Tsarskoye Selo
Tsarskoye Selo is the town containing a former Russian residence of the imperial family and visiting nobility, located south from the center of St. Petersburg. It is now part of the town of Pushkin and of the World Heritage Site Saint Petersburg and Related Groups of Monuments.-History:In...
(graduating in 1884), and later in the Historico-Philological Faculty of Saint Petersburg University
Saint Petersburg State University
Saint Petersburg State University is a Russian federal state-owned higher education institution based in Saint Petersburg and one of the oldest and largest universities in Russia....
(graduating in 1889), where Ivan Minaev and Sergey Oldenburg
Sergey Oldenburg
Sergey Fyodorovich Oldenburg was a Russian orientalist who specialized in Buddhist studies. He is remembered as the founder of Russian Indology and the teacher of Fyodor Shcherbatskoy....
were his teachers. Subsequently sent abroad, he studied Indian poetry with Georg Bühler
Georg Bühler
Professor Johann Georg Bühler was a scholar of ancient Indian languages and law.Bühler was born to Rev. Johann G...
in Vienna, and Buddhist philosophy with Hermann Jacobi
Hermann Jacobi
Hermann Georg Jacobi was an eminent German Indologist.-Education:Jacobi was born in Köln on 11 February 1850...
in Bonn. In 1897, he and Oldenburg inaugurated Bibliotheca Buddhica, a library of rare Buddhist texts.

Returning from a trip to India
India
India , officially the Republic of India , is a country in South Asia. It is the seventh-largest country by geographical area, the second-most populous country with over 1.2 billion people, and the most populous democracy in the world...
and Mongolia
Mongolia
Mongolia is a landlocked country in East and Central Asia. It is bordered by Russia to the north and China to the south, east and west. Although Mongolia does not share a border with Kazakhstan, its western-most point is only from Kazakhstan's eastern tip. Ulan Bator, the capital and largest...
, in 1903 Stcherbatsky published ( in Russian ) the first volume of Theory of Knowledge and Logic of the Doctrine of Later Buddhists ( 2 vols., St. Petersburg, 1903-1909 ). In 1928 he established the Institute of Buddhist Culture in Leningrad
Saint Petersburg
Saint Petersburg is a city and a federal subject of Russia located on the Neva River at the head of the Gulf of Finland on the Baltic Sea...
. His The Conception of Buddhist Nirvana
Nirvana
Nirvāṇa ; ) is a central concept in Indian religions. In sramanic thought, it is the state of being free from suffering. In Hindu philosophy, it is the union with the Supreme being through moksha...
(Leningrad, 1927), written in English, caused a sensation in the West. He followed suit with his main work in English, Buddhist Logic (2 vols., 1930–32), which has exerted an immense influence on Buddhology
Buddhology
Buddhology is the study of the Buddha or Buddhahood. The term is also used as a synonym for Buddhist Studies, contemporary academic investigation of Buddhism....
.

Although Stcherbatsky remained but little known in his own country, his extraordinary fluency in Sanskrit
Sanskrit
Sanskrit , is a historical Indo-Aryan language and the primary liturgical language of Hinduism, Jainism and Buddhism.Buddhism: besides Pali, see Buddhist Hybrid Sanskrit Today, it is listed as one of the 22 scheduled languages of India and is an official language of the state of Uttarakhand...
and Tibetan language
Tibetan language
The Tibetan languages are a cluster of mutually-unintelligible Tibeto-Burman languages spoken primarily by Tibetan peoples who live across a wide area of eastern Central Asia bordering the Indian subcontinent, including the Tibetan Plateau and the northern Indian subcontinent in Baltistan, Ladakh,...
s won him the admiration of Jawaharlal Nehru
Jawaharlal Nehru
Jawaharlal Nehru , often referred to with the epithet of Panditji, was an Indian statesman who became the first Prime Minister of independent India and became noted for his “neutralist” policies in foreign affairs. He was also one of the principal leaders of India’s independence movement in the...
and Rabindranath Tagore
Rabindranath Tagore
Rabindranath Tagore , sobriquet Gurudev, was a Bengali polymath who reshaped his region's literature and music. Author of Gitanjali and its "profoundly sensitive, fresh and beautiful verse", he became the first non-European Nobel laureate by earning the 1913 Prize in Literature...
. According to Debiprasad Chattopadhyaya
Debiprasad Chattopadhyaya
Debiprasad Chattopadhyaya was an eminent Bengali Marxist philosopher from India. He made extensive contributions to the exploration of the materialist current in ancient Indian Philosophy...
, "Stcherbatsky did help us – the Indians – to discover our own past and to restore the right perspective of our own philosophical heritage." The Encyclopædia Britannica
Encyclopædia Britannica
The Encyclopædia Britannica , published by Encyclopædia Britannica, Inc., is a general knowledge English-language encyclopaedia that is available in print, as a DVD, and on the Internet. It is written and continuously updated by about 100 full-time editors and more than 4,000 expert...
(2004 edition) acclaimed Stcherbatsky as "the foremost Western authority on Buddhist philosophy".