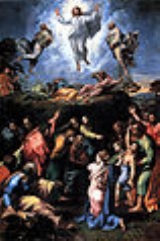 Encyclopedia
The Transfiguration is considered the last painting by the Italian
Italy
Italy , officially the Italian Republic languages]] under the European Charter for Regional or Minority Languages. In each of these, Italy's official name is as follows:;;;;;;;;), is a unitary parliamentary republic in South-Central Europe. To the north it borders France, Switzerland, Austria and...
High Renaissance
High Renaissance
The expression High Renaissance, in art history, is a periodizing convention used to denote the apogee of the visual arts in the Italian Renaissance...
master Raphael
Raphael
Raffaello Sanzio da Urbino , better known simply as Raphael, was an Italian painter and architect of the High Renaissance. His work is admired for its clarity of form and ease of composition and for its visual achievement of the Neoplatonic ideal of human grandeur...
. It was left unfinished by Raphael, and is believed to have been completed by his pupil, Giulio Romano
Giulio Romano
Giulio Romano was an Italian painter and architect. A pupil of Raphael, his stylistic deviations from high Renaissance classicism help define the 16th-century style known as Mannerism...
, shortly after Raphael's death in 1520. The picture is now housed in the Pinacoteca Vaticana of the Vatican Museum in the Vatican City
Vatican City
Vatican City , or Vatican City State, in Italian officially Stato della Città del Vaticano , which translates literally as State of the City of the Vatican, is a landlocked sovereign city-state whose territory consists of a walled enclave within the city of Rome, Italy. It has an area of...
.

This painting was created by Raphael and was believed to express a connection between God and his people.

The Transfiguration was created in 1516 and is another high end altarpiece. It was commissioned by Cardinal Giulio de Medici who was made arch bishop of Narbon and became Pope Clement VII.

At the time when Raphael was commissioned to paint the Transfiguration he was still doing the other commissions, the Stanze and the cartoons of the life of St Peter, three palaces and a villa. So Giulio de Medici commissioned Sebastioano di Piombo to paint the “Raising of Lazarus” to spur Raphael on.

Following Raphael's premature death in 1520, the cardinal retained the picture rather than send it to France. He subsequently donated it to the church of San Pietro in Montorio
San Pietro in Montorio
San Pietro in Montorio is a church in Rome, Italy, which includes in its courtyard The Tempietto built by Donato Bramante.-History:...
, Rome
Rome
Rome is the capital of Italy and the country's largest and most populated city and comune, with over 2.7 million residents in . The city is located in the central-western portion of the Italian Peninsula, on the Tiber River within the Lazio region of Italy.Rome's history spans two and a half...
. It was taken by French troops to Paris
Paris
Paris is the capital and largest city in France, situated on the river Seine, in northern France, at the heart of the Île-de-France region...
in 1797, but after 1815 it was brought to the Vatican, to its present location.

The composition is divided in two distinct parts, relating to successive episodes of the Gospel of Matthew
Gospel of Matthew
The Gospel According to Matthew is one of the four canonical gospels, one of the three synoptic gospels, and the first book of the New Testament. It tells of the life, ministry, death, and resurrection of Jesus of Nazareth...
. The upper part of the painting shows the Transfiguration
Transfiguration of Jesus
The Transfiguration of Jesus is an event reported in the New Testament in which Jesus is transfigured and becomes radiant upon a mountain. The Synoptic Gospels describe it, and 2 Peter 1:16-18 refers to it....
itself (on Mount Tabor
Mount Tabor
-Places:*Mount Tabor, a hill in Israel near Nazareth believed by many to be the site of the Transfiguration of ChristIn the United States:*Mount Tabor, Indiana, an unincorporated community...
, according to tradition), with the transfigured Christ
Christ
Christ is the English term for the Greek meaning "the anointed one". It is a translation of the Hebrew , usually transliterated into English as Messiah or Mashiach...
floating in front of softly illuminated clouds, between the prophet
Prophet
In religion, a prophet, from the Greek word προφήτης profitis meaning "foreteller", is an individual who is claimed to have been contacted by the supernatural or the divine, and serves as an intermediary with humanity, delivering this newfound knowledge from the supernatural entity to other people...
s Moses
Moses
Moses was, according to the Hebrew Bible and Qur'an, a religious leader, lawgiver and prophet, to whom the authorship of the Torah is traditionally attributed...
and Elijah with whom he is discoursing as recorded in the account of Matthew. The two figures kneeling on the left are the martyrs Saint Felicissimus and Saint Agapitus who shared August 6th as a feast day with the Feast of the Transfiguration
Feast of the Transfiguration
The Feast of the Transfiguration of Jesus is celebrated by various Christian denominations. The origins of the feast are less than certain and may have derived from the dedication of three basilicas on Mount Tabor...
.

In the lower part, Raphael depicts the Apostles attempting, unsuccessfully, to free the possessed boy of his demonic possession. They are unable to cure the sick child until the arrival of the recently-transfigured Christ, who performs a miracle. Goethe commented: "The two are one: below suffering, need, above, effective power, succour. Each bearing on the other, both interacting with one another."

Raphael's Transfiguration can be considered a prefiguration of both Mannerism
Mannerism
Mannerism is a period of European art that emerged from the later years of the Italian High Renaissance around 1520. It lasted until about 1580 in Italy, when a more Baroque style began to replace it, but Northern Mannerism continued into the early 17th century throughout much of Europe...
, as evidenced by the stylised, contorted poses of the figures at the bottom of the picture; and of Baroque painting, as evidenced by the dramatic tension imbued within those figures, and the strong use of chiaroscuro
Chiaroscuro
Chiaroscuro in art is "an Italian term which literally means 'light-dark'. In paintings the description refers to clear tonal contrasts which are often used to suggest the volume and modelling of the subjects depicted"....
throughout.

As a reflection on the artist, Raphael likely viewed the Transfiguration as his triumph. Raphael uses the contrast of Jesus presiding over men to satiate his commissioners Roman Catholic Church
Roman Catholic Church
The Catholic Church, also known as the Roman Catholic Church, is the world's largest Christian church, with over a billion members. Led by the Pope, it defines its mission as spreading the gospel of Jesus Christ, administering the sacraments and exercising charity...
. More interestingly, Raphael uses the cave to symbolize the Renaissance style, easily observed in the extended index finger as a reference to Michelangelo's Sistine Chapel
Sistine Chapel
Sistine Chapel is the best-known chapel in the Apostolic Palace, the official residence of the Pope in Vatican City. It is famous for its architecture and its decoration that was frescoed throughout by Renaissance artists including Michelangelo, Sandro Botticelli, Pietro Perugino, Pinturicchio...
. Additionally, he subtly incorporates a landscape in the background, but uses darker coloring to show his disdain for the style. Yet the focal point of to the viewer is the Baroque styled child and his guarding father. In all, Raphael successfully appeased his commissioners, paid homage to his predecessors, and ushered the subsequent predominance of Baroque painting.

On the simplest level, the painting can be interpreted as a depicting a dichotomy
Dichotomy
A dichotomy is any splitting of a whole into exactly two non-overlapping parts, meaning it is a procedure in which a whole is divided into two parts...
: the redemptive power of Christ, as symbolised by the purity and symmetry of the top half of the painting; contrasted with the flaws of Man, as symbolised by the dark, chaotic scenes in the bottom half of the painting.

The sixteenth century painter and biographer, Giorgio Vasari
Giorgio Vasari
Giorgio Vasari was an Italian painter, writer, historian, and architect, who is famous today for his biographies of Italian artists, considered the ideological foundation of art-historical writing.-Biography:...
, wrote in his Lives of the Artists
Lives of the Most Excellent Painters, Sculptors, and Architects
The Lives of the Most Excellent Italian Painters, Sculptors, and Architects, from Cimabue to Our Times, or Le Vite de' più eccellenti pittori, scultori, e architettori da Cimabue insino a' tempi nostri, as it was originally known in Italian, is a series of artist biographies written by 16th century...
that the Transfiguration was Raphael's "most beautiful and most divine" work.
The source of this article is wikipedia, the free encyclopedia.  The text of this article is licensed under the GFDL.