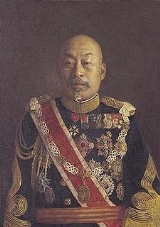 Encyclopedia
, GCB
Order of the Bath
The Most Honourable Order of the Bath is a British order of chivalry founded by George I on 18 May 1725. The name derives from the elaborate mediæval ceremony for creating a knight, which involved bathing as one of its elements. The knights so created were known as Knights of the Bath...
(5 February 1852 – 3 November 1919) was a Japanese military officer and politician. He was a Field Marshal in the Imperial Japanese Army
Imperial Japanese Army
-Foundation:During the Meiji Restoration, the military forces loyal to the Emperor were samurai drawn primarily from the loyalist feudal domains of Satsuma and Chōshū...
and the 18th Prime Minister of Japan
Prime Minister of Japan
The is the head of government of Japan. He is appointed by the Emperor of Japan after being designated by the Diet from among its members, and must enjoy the confidence of the House of Representatives to remain in office...
from 9 October 1916 to 29 September 1918.

Terauchi Masatake was born in Chōshū Domain (present-day Yamaguchi prefecture
Yamaguchi Prefecture
is a prefecture of Japan in the Chūgoku region on Honshū island. The capital is the city of Yamaguchi, in the center of the prefecture. The largest city, however, is Shimonoseki.- History :...
) as the son of a samurai
Samurai
is the term for the military nobility of pre-industrial Japan. According to translator William Scott Wilson: "In Chinese, the character 侍 was originally a verb meaning to wait upon or accompany a person in the upper ranks of society, and this is also true of the original term in Japanese, saburau...
of the Hagi
Hagi
Hagi may refer to:* Japanese bush clover or Lespedeza* Hagi, Yamaguchi, a city in Japan** Hagi ware, a type of pottery originating in Hagi* Gheorghe Hagi, a Romanian football player...
clan.

As a young soldier, he fought in the Boshin War
Boshin War
The was a civil war in Japan, fought from 1868 to 1869 between forces of the ruling Tokugawa shogunate and those seeking to return political power to the imperial court....
against the Tokugawa shogunate
Tokugawa shogunate
The Tokugawa shogunate, also known as the and the , was a feudal regime of Japan established by Tokugawa Ieyasu and ruled by the shoguns of the Tokugawa family. This period is known as the Edo period and gets its name from the capital city, Edo, which is now called Tokyo, after the name was...
, and later was commissioned second lieutenant in the fledging Imperial Japanese Army
Imperial Japanese Army
-Foundation:During the Meiji Restoration, the military forces loyal to the Emperor were samurai drawn primarily from the loyalist feudal domains of Satsuma and Chōshū...
. He was injured and lost his right hand during the Satsuma Rebellion
Satsuma Rebellion
The was a revolt of Satsuma ex-samurai against the Meiji government from January 29 to September 24, 1877, 9 years into the Meiji Era. It was the last, and the most serious, of a series of armed uprisings against the new government.-Background:...
of 1877, but his physical disability
Physical disability
A physical disability is any impairment which limits the physical function of one or more limbs or fine or gross motor ability. Other physical disabilities include impairments which limit other facets of daily living, such as respiratory disorders and epilepsy....
did not prove to be an impediment to his future military and political career.

In 1882, after being sent to France
France
The French Republic , The French Republic , The French Republic , (commonly known as France , is a unitary semi-presidential republic in Western Europe with several overseas territories and islands located on other continents and in the Indian, Pacific, and Atlantic oceans. Metropolitan France...
for military study as military attaché
Military attaché
A military attaché is a military expert who is attached to a diplomatic mission . This post is normally filled by a high-ranking military officer who retains the commission while serving in an embassy...
, Terauchi was appointed to several important military posts. He was the first Inspector General of Military Education
Inspectorate General of Military Training
The was responsible for all non-military aviation training of the Imperial Japanese Army. It was headed by an Inspector general who was responsible for overseeing technical and tactical training, and who reported directly to the Emperor of Japan via the Imperial General Headquarters rather than to...
in 1898 and made that post one of the three most powerful in the Imperial Army. He was appointed as Minister of the Army
Ministry of War of Japan
The , more popularly known as the Ministry of War of Japan, was cabinet-level ministry in the Empire of Japan charged with the administrative affairs of the Imperial Japanese Army...
in 1901, during the first Katsura
Katsura
-Architecture:*The Katsura imperial villa, one of Japan's most important architectural treasures, and a World Heritage Site-Geography:*Katsuura, Chiba, city located in Chiba Prefecture, Japan*Katsura, Tokushima, a town in Tokushima Prefecture, Japan...
administration. The Japanese victory in the Russo-Japanese War
Russo-Japanese War
The Russo-Japanese War was "the first great war of the 20th century." It grew out of rival imperial ambitions of the Russian Empire and Japanese Empire over Manchuria and Korea...
(1904-1905) occurred during his term as War Minister. After the war, he was ennobled with the title of danshaku (baron
Baron
Baron is a title of nobility. The word baron comes from Old French baron, itself from Old High German and Latin baro meaning " man, warrior"; it merged with cognate Old English beorn meaning "nobleman"...
), and in 1911, his title was raised to that of hakushaku (count
Count
A count or countess is an aristocratic nobleman in European countries. The word count came into English from the French comte, itself from Latin comes—in its accusative comitem—meaning "companion", and later "companion of the emperor, delegate of the emperor". The adjective form of the word is...
).

The annexation of Korea by Japan and subsequent policies introduced by the new government was highly unpopular with large segments of the Korean population, and Terauchi employed military force to maintain control. Terauchi used the deep historical and cultural ties between Korea and Japan as justification for the eventual goal of complete assimilation of Korea into the Japanese mainstream. To this end, thousands of schools were built across Korea. Although this contributed greatly to an increase in literacy and the educational standard, the curriculum was centered on Japanese language and history, with the intent of assimilation of the populace into loyal subjects of the Japanese Empire.

Other of Terauchi's policies also had noble goals but evil consequences. For example, land reform
Land reform
[Image:Jakarta farmers protest23.jpg|300px|thumb|right|Farmers protesting for Land Reform in Indonesia]Land reform involves the changing of laws, regulations or customs regarding land ownership. Land reform may consist of a government-initiated or government-backed property redistribution,...
was desperately needed in Korea. The Korean land ownership system was a complex system of absentee landlords, partial owner-tenants, and cultivators with traditional but without legal proof of ownership. Terauchi's new Land Survey Bureau conducted cadastral surveys that reestablished ownership by basis of written proof (deeds, titles, and similar documents). Ownership was denied to those who could not provide such written documentation (mostly lower class and partial owners, who had only traditional verbal "cultivator rights"). Although the plan succeeded in reforming land ownership/taxation structures, it added tremendously to the bitter and hostile environment of the time by enabling a huge amount of Korean land to be seized by the government and sold to Japanese developers.

In 1916, Terauchi became the 18th Prime Minister of Japan
Prime Minister of Japan
The is the head of government of Japan. He is appointed by the Emperor of Japan after being designated by the Diet from among its members, and must enjoy the confidence of the House of Representatives to remain in office...
. During the same year, he received his promotion to the largely ceremonial rank of field marshal
Field Marshal (Japan)
was the highest title in the prewar Imperial Japanese Military.The term gensui, which was used for both the Imperial Japanese Army and the Imperial Japanese Navy, was at first a rank held by Saigō Takamori as the Commander of the Armies in 1872...
. His cabinet consisted solely of career bureaucrats as he distrusted career civilian politicians. During part of his administration he simultaneously also held the post of Foreign Minister
Minister for Foreign Affairs (Japan)
The of Japan is the Cabinet member responsible for Japanese foreign policy and the chief executive of the Ministry of Foreign Affairs.Since the end of the American occupation of Japan, the position has been one of the most powerful in the Cabinet, as Japan's economic interests have long relied on...
and Finance Minister
Minister of Finance (Japan)
The is the member of the Cabinet of Japan in charge of the Ministry of Finance. This position was formerly cited as being Japan's most powerful and one of the world's, because Japan had historically held the largest foreign exchange reserves...
.

In September 1918, Terauchi resigned his office, due to the rice riots
Rice Riots of 1918
The ' were a series of popular disturbances that erupted throughout Japan from July to September 1918, which brought about the collapse of the Terauchi Masatake administration.-Causes:...
that had spread throughout Japan due to postwar inflation
Inflation
In economics, inflation is a rise in the general level of prices of goods and services in an economy over a period of time.When the general price level rises, each unit of currency buys fewer goods and services. Consequently, inflation also reflects an erosion in the purchasing power of money – a...
; he died the following year.

His decorations included the Order of the Rising Sun
Order of the Rising Sun
The is a Japanese order, established in 1875 by Emperor Meiji of Japan. The Order was the first national decoration awarded by the Japanese Government, created on April 10, 1875 by decree of the Council of State. The badge features rays of sunlight from the rising sun...
(1st class) and Order of the Golden Kite
Order of the Golden Kite
The ' was an order of the Empire of Japan, established on 12 February 1890 by Emperor Meiji "in commemoration of Jimmu Tennō, the Romulus of Japan."-Background:...
(1st Class).

The billiken
Billiken
The Billiken was a charm doll created by an American art teacher and illustrator, Florence Pretz of St. Louis, Missouri, who is said to have seen the mysterious figure in a dream. In 1908, she patented the Billiken, who was elf-like with pointed ears, a mischievous smile and a tuft of hair on his...
doll, which was a Kewpie-like fad toy invented in 1908 very popular in Japan lent its name to the Terauchi administration, partly due to the doll’s uncanny resemblance to Terauchi Masatake's bald head.

Terauchi's son, Terauchi Hisaichi, was the commander of the Imperial Japanese Army's Southern Expeditionary Army Group
Southern Expeditionary Army Group
The was a army group of the Imperial Japanese Army during World War II. It was responsible for all military operations in South East Asian and South West Pacific campaigns of World War II....
during World War II
World War II
World War II, or the Second World War , was a global conflict lasting from 1939 to 1945, involving most of the world's nations—including all of the great powers—eventually forming two opposing military alliances: the Allies and the Axis...
and was also a field marshal.