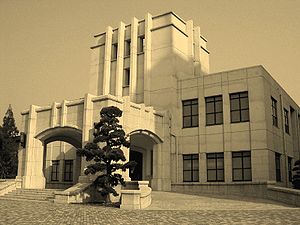 The , more popularly known as the Ministry of War of Japan, was cabinet-level ministry
Cabinet (government)
A Cabinet is a body of high ranking government officials, typically representing the executive branch. It can also sometimes be referred to as the Council of Ministers, an Executive Council, or an Executive Committee.- Overview :...
in the Empire of Japan
Empire of Japan
The Empire of Japan is the name of the state of Japan that existed from the Meiji Restoration on 3 January 1868 to the enactment of the post-World War II Constitution of...
charged with the administrative affairs of the Imperial Japanese Army
Imperial Japanese Army
-Foundation:During the Meiji Restoration, the military forces loyal to the Emperor were samurai drawn primarily from the loyalist feudal domains of Satsuma and Chōshū...
(IJA). It existed from 1872 to 1945.

The Army Ministry was created in April 1872, along with the Navy Ministry
Ministry of the Navy of Japan
The was a cabinet-level ministry in the Empire of Japan charged with the administrative affairs of the Imperial Japanese Navy . It existed from 1872 to 1945.-History:...
, to replace the of the early Meiji government.

Initially, the Army Ministry was in charge of both administration and operational command of the Imperial Japanese Army. However, with the creation of the Imperial Japanese Army General Staff in December 1878, it was left with only administrative functions. Its primary role was to secure the army budget, weapons procurement, personnel, relations with the Diet of Japan
Diet of Japan
The is Japan's bicameral legislature. It is composed of a lower house, called the House of Representatives, and an upper house, called the House of Councillors. Both houses of the Diet are directly elected under a parallel voting system. In addition to passing laws, the Diet is formally...
and the Cabinet
Cabinet of Japan
The of Japan is the executive branch of the government of Japan. It consists of the Prime Minister and up to fourteen other members, called Ministers of State. The Prime Minister is designated by the Diet, and the remaining ministers are appointed and dismissed by the Prime Minister...
and broad matters of military policy.

The post of Army Minister was politically powerful. Although a member of the Cabinet after the establishment of the cabinet system of government in 1885, the Army Minister was answerable directly to the Emperor
Emperor of Japan
The Emperor of Japan is, according to the 1947 Constitution of Japan, "the symbol of the state and of the unity of the people." He is a ceremonial figurehead under a form of constitutional monarchy and is head of the Japanese Imperial Family with functions as head of state. He is also the highest...
(the commander-in-chief of all Japanese armed forces under the Meiji Constitution
Meiji Constitution
The ', known informally as the ', was the organic law of the Japanese empire, in force from November 29, 1890 until May 2, 1947.-Outline:...
) and not the Prime Minister
Prime Minister of Japan
The is the head of government of Japan. He is appointed by the Emperor of Japan after being designated by the Diet from among its members, and must enjoy the confidence of the House of Representatives to remain in office...
.

The post of Army Minister was usually filled by an active-duty general in the Imperial Japanese Army. This practice was made into law under the in 1900 by Prime Minister Yamagata Aritomo
Yamagata Aritomo
Field Marshal Prince , also known as Yamagata Kyōsuke, was a field marshal in the Imperial Japanese Army and twice Prime Minister of Japan. He is considered one of the architects of the military and political foundations of early modern Japan. Yamagata Aritomo can be seen as the father of Japanese...
to curb the influence of political parties
Political party
A political party is a political organization that typically seeks to influence government policy, usually by nominating their own candidates and trying to seat them in political office. Parties participate in electoral campaigns, educational outreach or protest actions...
into military affairs. Abolished in 1913 under the administration of Yamamoto Gonnohyōe
Yamamoto Gonnohyoe
, also called Gonnohyōe, was an admiral in the Imperial Japanese Navy and the 16th and 22nd Prime Minister of Japan.-Early life:...
, the law was revived again in 1936 at the insistence of the Army General Staff by Prime Minister Hirota Kōki
Koki Hirota
was a Japanese diplomat, politician and the 32nd Prime Minister of Japan from March 9, 1936 to February 2, 1937.-Early life:Hirota was born in what is now part of Chūō-ku, Fukuoka city, Fukuoka Prefecture. His father was a stonemason, and he was adopted into the Hirota family. After attending...
. The ability of the Imperial Japanese Army to refuse to nominate an Army Minister gave it effective veto power over the formation (or continuation) of any civilian administration, and was a key factor in the erosion of representative democracy
Representative democracy
Representative democracy is a form of government founded on the principle of elected individuals representing the people, as opposed to autocracy and direct democracy...
and the rise of Japanese militarism
Japanese militarism
refers to the ideology in the Empire of Japan that militarism should dominate the political and social life of the nation, and that the strength of the military is equal to the strength of a nation.-Rise of militarism :...
.

With the defeat of the Empire of Japan
Empire of Japan
The Empire of Japan is the name of the state of Japan that existed from the Meiji Restoration on 3 January 1868 to the enactment of the post-World War II Constitution of...
in World War II
World War II
World War II, or the Second World War , was a global conflict lasting from 1939 to 1945, involving most of the world's nations—including all of the great powers—eventually forming two opposing military alliances: the Allies and the Axis...
, the Army Ministry was abolished together with the Imperial Japanese Army by the American occupation authorities
Supreme Commander of the Allied Powers
Supreme Commander of the Allied Powers was the title held by General Douglas MacArthur during the Occupation of Japan following World War II...
in November 1945 and was not revived in the post-war Constitution of Japan.

The Army Ministry and Imperial General Headquarters
Imperial General Headquarters
The as part of the Supreme War Council was established in 1893 to coordinate efforts between the Imperial Japanese Army and Imperial Japanese Navy during wartime...
were located was located in Ichigaya Heights
Ichigaya
Ichigaya is an area in the eastern portion of Shinjuku, Tokyo, Japan.-Places in Ichigaya:*Hosei University Ichigaya Campus*Chuo University Graduate School...
, in which is now part of Shinjuku, Tokyo
Shinjuku, Tokyo
is one of the 23 special wards of Tokyo, Japan. It is a major commercial and administrative center, housing the busiest train station in the world and the Tokyo Metropolitan Government Building, the administration center for the government of Tokyo.As of 2008, the ward has an estimated population...
.

Ministers of Army of Japan