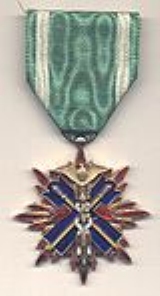 Encyclopedia
The was an order
Order (decoration)
An order or order of merit is a visible honour, awarded by a government, dynastic house or international organization to an individual, usually in recognition of distinguished service to a nation or to humanity. The distinction between orders and decorations is somewhat vague, except that most...
of the Empire of Japan
Empire of Japan
The Empire of Japan is the name of the state of Japan that existed from the Meiji Restoration on 3 January 1868 to the enactment of the post-World War II Constitution of...
, established on 12 February 1890 by Emperor Meiji
Emperor Meiji
The or was the 122nd emperor of Japan according to the traditional order of succession, reigning from 3 February 1867 until his death...
"in commemoration of Jimmu
Emperor Jimmu
was the first Emperor of Japan, according to the traditional order of succession. He is also known as Kamuyamato Iwarebiko and personally as Wakamikenu no Mikoto or Sano no Mikoto....
Tennō, the Romulus of Japan."

The Order of the Golden Kite was an exclusively military award, conferred for bravery, leadership or command in battle.


Since the monthly pay for a private
Private (rank)
A Private is a soldier of the lowest military rank .In modern military parlance, 'Private' is shortened to 'Pte' in the United Kingdom and other Commonwealth countries and to 'Pvt.' in the United States.Notably both Sir Fitzroy MacLean and Enoch Powell are examples of, rare, rapid career...
in the Imperial Japanese Army
Imperial Japanese Army
-Foundation:During the Meiji Restoration, the military forces loyal to the Emperor were samurai drawn primarily from the loyalist feudal domains of Satsuma and Chōshū...
at the time was 8 Yen, 80 sen, this amounted to a very substantial reward. The monetary stipend was abolished in 1940.

The honor was sometimes awarded individually, sometimes awarded en masse. In mid-October 1942, posthumous awards were announced following ceremonies at the Yasukuni Shrine
Yasukuni Shrine
is a Shinto shrine located in Chiyoda, Tokyo, Japan. It is dedicated to the soldiers and others who died fighting on behalf of the Emperor of Japan. Currently, its Symbolic Registry of Divinities lists the names of over 2,466,000 enshrined men and women whose lives were dedicated to the service of...
. Posthumous honorees included 995 who were lost in combat in the far-flung Pacific War
Pacific War
The Pacific War, also sometimes called the Asia-Pacific War refers broadly to the parts of World War II that took place in the Pacific Ocean, its islands, and in East Asia, then called the Far East...
battles and 3,031 were lost fighting in China
Second Sino-Japanese War
The Second Sino-Japanese War was a military conflict fought primarily between the Republic of China and the Empire of Japan. From 1937 to 1941, China fought Japan with some economic help from Germany , the Soviet Union and the United States...
. In this instance, Tokyo's official radio broadcast of the list of posthumous recipients of the Order of the Golden Kite was monitored by Allied forces
Allies of World War II
The Allies of World War II were the countries that opposed the Axis powers during the Second World War . Former Axis states contributing to the Allied victory are not considered Allied states...
in Asia. The number of honorees was not considered remarkable at the time, but the number of posthumous awards was considered noteworthy by Allied analysts. Specific high ranking naval and army officers were named; and in addition, special mention was given to 55 naval aviators and 9 "members of a special attack flotilla" -- presumably miniature submarines taking part in the attack on Pearl Harbor
Attack on Pearl Harbor
The attack on Pearl Harbor was a surprise military strike conducted by the Imperial Japanese Navy against the United States naval base at Pearl Harbor, Hawaii, on the morning of December 7, 1941...
.

The badge depicts a golden kite
Kite (bird)
Kites are raptors with long wings and weak legs which spend a great deal of time soaring. Most feed mainly on carrion but some take various amounts of live prey.They are birds of prey which, along with hawks and eagles, are from the family Accipitridae....
, a messenger of the kami
Kami
is the Japanese word for the spirits, natural forces, or essence in the Shinto faith. Although the word is sometimes translated as "god" or "deity", some Shinto scholars argue that such a translation can cause a misunderstanding of the term...
as described in the ancient Japanese chronicle Nihon Shoki
Nihon Shoki
The , sometimes translated as The Chronicles of Japan, is the second oldest book of classical Japanese history. It is more elaborate and detailed than the Kojiki, the oldest, and has proven to be an important tool for historians and archaeologists as it includes the most complete extant historical...
, which helped Emperor Jimmu
Emperor Jimmu
was the first Emperor of Japan, according to the traditional order of succession. He is also known as Kamuyamato Iwarebiko and personally as Wakamikenu no Mikoto or Sano no Mikoto....
defeat his enemies in battle. The golden kite stands on an eight-pointed star with 32 rays enameled
Vitreous enamel
Vitreous enamel, also porcelain enamel in U.S. English, is a material made by fusing powdered glass to a substrate by firing, usually between 750 and 850 °C...
in red. Below the kite are two crossed ancient samurai
Samurai
is the term for the military nobility of pre-industrial Japan. According to translator William Scott Wilson: "In Chinese, the character 侍 was originally a verb meaning to wait upon or accompany a person in the upper ranks of society, and this is also true of the original term in Japanese, saburau...
shields, enameled blue, with two crossed swords enameled yellow, with silver
Silver
Silver is a metallic chemical element with the chemical symbol Ag and atomic number 47. A soft, white, lustrous transition metal, it has the highest electrical conductivity of any element and the highest thermal conductivity of any metal...
hilts. On one side is a halberd
Halberd
A halberd is a two-handed pole weapon that came to prominent use during the 14th and 15th centuries. Possibly the word halberd comes from the German words Halm , and Barte - in modern-day German, the weapon is called Hellebarde. The halberd consists of an axe blade topped with a spike mounted on...
(enameled green with white trappings), with the mitsu tomoe
Tomoe
A tomoe or tomoye is a Japanese abstract shape that resembles a comma or the usual form of magatama. It is a common design element in and corporate logos, particularly in triplicate whorls known as . Some view the mitsudomoe as representative of the threefold division at the heart of the...
Shinto
Shinto
or Shintoism, also kami-no-michi, is the indigenous spirituality of Japan and the Japanese people. It is a set of practices, to be carried out diligently, to establish a connection between present day Japan and its ancient past. Shinto practices were first recorded and codified in the written...
symbol on red banners. The reverse side is plain.

The badge was gilt
Gilding
The term gilding covers a number of decorative techniques for applying fine gold leaf or powder to solid surfaces such as wood, stone, or metal to give a thin coating of gold. A gilded object is described as "gilt"...
for the 1st-5th classes and silver
Silver
Silver is a metallic chemical element with the chemical symbol Ag and atomic number 47. A soft, white, lustrous transition metal, it has the highest electrical conductivity of any element and the highest thermal conductivity of any metal...
for the 5th-7th classes. It was suspended on a ribbon in blue-green with a white stripe near the edges, worn as a sash on the right shoulder by the 1st class, as a necklet by the 2nd and 3rd classes, on the left chest by the 4th and 5th classes. The badges for 6th and 7th classes were non-enameled.

The star of the 1st and 2nd classes was similar to the badge as described above, but with both red and yellow enameled rays. It was worn on the left chest by the 1st class, on the right chest by the 2nd class.