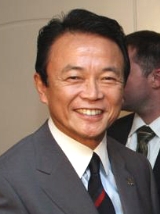 Encyclopedia
The is the head of government
Head of government
Head of government is the chief officer of the executive branch of a government, often presiding over a cabinet. In a parliamentary system, the head of government is often styled prime minister, chief minister, premier, etc...
of Japan. He is appointed by the Emperor of Japan
Emperor of Japan
The Emperor of Japan is, according to the 1947 Constitution of Japan, "the symbol of the state and of the unity of the people." He is a ceremonial figurehead under a form of constitutional monarchy and is head of the Japanese Imperial Family with functions as head of state. He is also the highest...
after being designated by the Diet
Diet of Japan
The is Japan's bicameral legislature. It is composed of a lower house, called the House of Representatives, and an upper house, called the House of Councillors. Both houses of the Diet are directly elected under a parallel voting system. In addition to passing laws, the Diet is formally...
from among its members, and must enjoy the confidence of the House of Representatives
House of Representatives of Japan
The is the lower house of the Diet of Japan. The House of Councillors of Japan is the upper house.The House of Representatives has 480 members, elected for a four-year term. Of these, 180 members are elected from 11 multi-member constituencies by a party-list system of proportional representation,...
to remain in office. He is the head of the Cabinet
Cabinet of Japan
The of Japan is the executive branch of the government of Japan. It consists of the Prime Minister and up to fourteen other members, called Ministers of State. The Prime Minister is designated by the Diet, and the remaining ministers are appointed and dismissed by the Prime Minister...
and appoints and dismisses the Ministers of State
Ministries of Japan
The most influential part of the executive of the Japanese government are the ministries. In postwar politics, the posts of ministers have been given to senior legislators, mostly of the LDP. However, few ministers have been serving their terms for more than one or two years, and developed the...
; the literal translation of the Japanese name for the office is Minister for the General Administration of the Cabinet.

The office was created in 1885, four years before the enactment of the Meiji Constitution
Meiji Constitution
The ', known informally as the ', was the organic law of the Japanese empire, in force from November 29, 1890 until May 2, 1947.-Outline:...
. It took its current form with the adoption of the current constitution
Constitution of Japan
The is the fundamental law of Japan. It was enacted on 3 May, 1947 as a new constitution for postwar Japan.-Outline:The constitution provides for a parliamentary system of government and guarantees certain fundamental rights...
in 1947.

The Prime Minister is designated by both houses of the Diet
Diet of Japan
The is Japan's bicameral legislature. It is composed of a lower house, called the House of Representatives, and an upper house, called the House of Councillors. Both houses of the Diet are directly elected under a parallel voting system. In addition to passing laws, the Diet is formally...
, before the conduct of any other business. For that purpose, each conducts a ballot under the run-off
Two-round system
The two-round system is a voting system used to elect a single winner where the voter casts a single vote for their chosen candidate...
system. If the two houses choose different individuals, then a joint committee of both houses is appointed to agree on a common candidate. Ultimately, however, if the two houses do not agree within ten days, the decision of the House of Representatives is deemed to be that of the Diet. Therefore, the House of Representatives can theoretically ensure the appointment of any Prime Minister it wishes. The candidate is then formally appointed to office by the Emperor
Emperor of Japan
The Emperor of Japan is, according to the 1947 Constitution of Japan, "the symbol of the state and of the unity of the people." He is a ceremonial figurehead under a form of constitutional monarchy and is head of the Japanese Imperial Family with functions as head of state. He is also the highest...
.

After the Meiji Restoration
Meiji Restoration
The , also known as the Meiji Ishin, Revolution, Reform or Renewal, was a chain of events that restored imperial rule to Japan in 1868...
, the Daijō-kan system, which was used in the Nara period
Nara period
The of the history of Japan covers the years from AD 710 to 794. Empress Gemmei established the capital of Heijō-kyō . Except for 5 years , when the capital was briefly moved again, it remained the capital of Japanese civilization until Emperor Kammu established a new capital, Nagaoka-kyō, in 784...
, was adopted as the Japanese government entity. Political powers of their leader, Daijō Daijin and his aides, Sadaijin
Sadaijin
, most commonly translated as "Minister of the Left", was a government position in Japan in the late Nara and Heian periods. The position was consolidated in the Taihō Code of 702. The Asuka Kiyomihara Code of 689 marks the initial appearance of the Sadaijin in the context of a central...
and Nadaijin were ambiguous and frequently conflicted with other positions such as Sangi. In the 1880s, Itō Hirobumi
Ito Hirobumi
Prince was a samurai of Chōshū domain, Japanese statesman, four time Prime Minister of Japan , genrō and Resident-General of Korea. Itō was assassinated by An Jung-geun, a Korean nationalist who was against the annexation of Korea by the Japanese Empire...
, then one of Sangi, started to examine the reformation of the governmental organization. In 1882, Ito and his staff, Itō Miyoji
Ito Miyoji
Count was a statesman in Meiji period Japan.-Biography:Itō was born into a local samurai administrator's family in Nagasaki, Hizen Province . From his early days, he showed a mastery of foreign languages...
and Saionji Kinmochi
Saionji Kinmochi
Prince was a Japanese politician, statesman and twice Prime Minister of Japan. His title does not signify the son of an emperor, but the highest rank of Japanese hereditary nobility; he was elevated from marquis to prince in 1920...
, traveled to Europe and investigated constitutions in constitutional monarchies
Constitutional monarchy
Constitutional monarchy is a form of government in which a monarch acts as head of state within the parameters of a constitution, whether it be a written, uncodified or blended constitution...
, the British Empire
British Empire
The British Empire comprised the dominions, colonies, protectorates, mandates and other territories ruled or administered by the United Kingdom. It originated with the overseas colonies and trading posts established by England in the late 16th and early 17th centuries. At its height, it was the...
and the German Empire
German Empire
The German Empire refers to Germany during the "Second Reich" period from the unification of Germany and proclamation of Wilhelm I as German Emperor on 18 January 1871, to 1918, when it became a federal republic after defeat in World War I and the abdication of the Emperor, Wilhelm II.The German...
. After his return to Japan, Ito urged the need of a Constitution and a modern governmental system and persuaded conservatives to approve his plan.

On December 22, 1885, in the Daijō-kan order No. 69, abolition of Daijō-kan and the induction of the Prime Minister (内閣総理大臣) and his cabinet were published.

The Office of the Prime Minister of Japan is called the Kantei
Kantei
The is the principal workplace of the Prime Minister of Japan.- About :Located at 2-3-1 Nagata-chō, Chiyoda-ku, Tokyo 100-8968, it is diagonally adjacent to the National Diet Building. The new residence went into service in April 2002 and replaced the former residence, built in 1929. The former...
(官邸). The original Kantei served from 1929 until 2002, until a new building was inaugurated which now serves as the new Kantei. The old Kantei was then converted to the new official residence, or Kōtei (公邸).

There are twelve living former prime ministers of Japan. The most recently serving prime minister to die was Keizō Obuchi
Keizo Obuchi
was a Japanese politician who served in the House of Representatives for twelve terms, and ultimately as the 84th Prime Minister of Japan from July 30, 1998 to April 5, 2000. His political career ended when he suffered a serious and ultimately fatal stroke....
(1998–2000), on 14 May 2000. The most recent prime minister to die was Kiichi Miyazawa
Kiichi Miyazawa
was a Japanese politician and the 78th Prime Minister from November 5, 1991 to August 9, 1993.-Early life and career:Miyazawa was born in Fukuyama, Hiroshima Prefecture, and graduated from Tokyo Imperial University with a degree in law. In 1942 he joined the Ministry of Finance...
(1991–1993), on 28 June 2007.