Tanais is the ancient name for the River Don in Russia
Russia
Russia or , officially known as both Russia and the Russian Federation , is a country in northern Eurasia. It is a federal semi-presidential republic, comprising 83 federal subjects...
. Strabo
Strabo
Strabo, also written Strabon was a Greek historian, geographer and philosopher.-Life:Strabo was born to an affluent family from Amaseia in Pontus , a city which he said was situated the approximate equivalent of 75 km from the Black Sea...
(Geography 11.1) regarded it as the boundary between Europe
Europe
Europe is, by convention, one of the world's seven continents. Comprising the westernmost peninsula of Eurasia, Europe is generally 'divided' from Asia to its east by the watershed divides of the Ural and Caucasus Mountains, the Ural River, the Caspian and Black Seas, and the waterways connecting...
and Asia
Asia
Asia is the world's largest and most populous continent, located primarily in the eastern and northern hemispheres. It covers 8.7% of the Earth's total surface area and with approximately 3.879 billion people, it hosts 60% of the world's current human population...
.

In antiquity, Tanais was also the name of a city in the Don river delta (Maeotian marshes
Maeotian marshes
In the geography of Antiquity the Maeotian marshes lay where the Don River emptied into the Maeotian Lake near Tanais. The marshes served as a check to the westward migration of nomad peoples from the steppe of Central Asia.The area was named after the Maeotae who lived around the Maeotian Lake....
) that reaches into the northeasternmost part of the Sea of Azov
Sea of Azov
The Sea of Azov , known in Classical Antiquity as Lake Maeotis, is a sea on the south of Eastern Europe. It is linked by the narrow Strait of Kerch to the Black Sea to the south and is bounded on the north by Ukraine mainland, on the east by Russia, and on the west by the Ukraine's Crimean...
, which the Greeks called Lake Maeotis. The site of ancient Tanais is about 30 km west of modern Rostov on Don. The central city site lies on a plateau with a difference up to 20m in elevation in the south. It is bordered by a natural valley to the east, and an artificial ditch to the west.

The site of Tanais was occupied long before the Milesians
Milesians (Greek)
The Milesians of Hellenic civilization were the inhabitants of Miletus, a city in the Anatolia province of modern-day Turkey, near the coast of the Mediterranean Sea and at the mouth of the Meander River. Settlers from Crete moved to Miletus sometime in 16th century BC...
founded an emporium
Marketplace
A marketplace is the space, actual, virtual or metaphorical, in which a market operates. The term is also used in a trademark law context to denote the actual consumer environment, ie. the 'real world' in which products and services are provided and consumed.-Marketplaces and street markets:A...
there. A necropolis
Necropolis
A necropolis is a large cemetery or burial ground, usually including structural tombs. The word comes from the Greek νεκρόπολις - nekropolis, literally meaning "city of the dead"...
of over 300 burial mounds near the ancient city show that the site had already been occupied since the Bronze Age
Bronze Age
The Bronze Age is a period characterized by the use of copper and its alloy bronze as the chief hard materials in the manufacture of some implements and weapons. Chronologically, it stands between the Stone Age and Iron Age...
, and that mound burials continued through Greek
Ancient Greece
Ancient Greece is a civilization belonging to a period of Greek history that lasted from the Archaic period of the 8th to 6th centuries BC to the end of antiquity. Immediately following this period was the beginning of the Early Middle Ages and the Byzantine era. Included in Ancient Greece is the...
and into even Roman
Ancient Rome
Ancient Rome was a thriving civilization that grew on the Italian Peninsula as early as the 8th century BC. Located along the Mediterranean Sea and centered on the city of Rome, it expanded to one of the largest empires in the ancient world....
times.

Greek traders seem to have been meeting nomads in the district as early as the 7th century BCE without a formal, permanent settlement. Greek colonies
Colonies in antiquity
Colonies in antiquity were city-states founded from a mother-city—its "metropolis"—, not from a territory-at-large. Bonds between a colony and its metropolis remained often close, and took specific forms...
had two kinds of origins, apoikiai of citizens from the mother city-state, and emporia, which were strictly trading stations. Founded late in the 3rd century BCE, by merchant adventurers from Miletus
Miletus
Miletus was an ancient Greek city on the western coast of Anatolia , near the mouth of the Maeander River in ancient Caria...
, Tanais quickly developed into an emporium at the farthest northeastern extension of the Hellenic cultural sphere. It was a natural post, first for the trade of the steppes reaching away eastwards in an unbroken grass sea to the Altai
Altay Mountains
The Altai Mountains are a mountain range in East-Central Asia, where Russia, China, Mongolia and Kazakhstan come together, and where the rivers Irtysh and Ob have their sources. The Altai Mountains are known as the original locus of the speakers of Turkic as well as other members of the proposed...
, the Scythia
Scythia
In antiquity, Scythian or Scyths were terms used by the Greeks to refer to certain Iranian groups of horse-riding nomadic pastoralists who dwelt on the Pontic-Caspian steppe...
n Holy Land, second for the trade of the Black Sea
Black Sea
The Black Sea is bounded by Europe, Anatolia and the Caucasus and is ultimately connected to the Atlantic Ocean via the Mediterranean and the Aegean seas and various straits. The Bosphorus strait connects it to the Sea of Marmara, and the strait of the Dardanelles connects that sea to the Aegean...
, ringed with Greek-dominated ports and entrepots, and third for trade from the impenetrable north, with furs and slaves brought down the Don. Strabo
Strabo
Strabo, also written Strabon was a Greek historian, geographer and philosopher.-Life:Strabo was born to an affluent family from Amaseia in Pontus , a city which he said was situated the approximate equivalent of 75 km from the Black Sea...
mentions Tanais in his Geography
Geographica (Strabo)
The Geographica , or Geography, is a 17-volume encyclopedia of geographical knowledge written in Greek by Strabo, an educated citizen of the Roman empire of Greek descent. Work can have begun on it no earlier than 20 BC...
(11.2.2).

The site for the city, ruled by an archon
Archon
Archon is a Greek word that means "ruler" or "lord", frequently used as the title of a specific public office. It is the masculine present participle of the verb stem ἀρχ-, meaning "to rule", derived from the same root as monarch, hierarchy, and anarchy.- Ancient Greece :In ancient Greece the...
, was at the eastern edge of the territory of the kings of Bosporus
Bosporan Kingdom
The Bosporan Kingdom or the Kingdom of the Cimmerian Bosporus was an ancient state, located in eastern Crimea and the Taman Peninsula on the shores of the Cimmerian Bosporus...
. A major shift in social emphasis is represented in the archaeological site when the propylea gate that linked the port section with the agora was removed, and the open center of public life was occupied by a palatial dwelling in Roman times for the kings of Bosporus. For the first time there were client kings at Tanais: Sauromates (AD175-211) and his son Rescuporides (c. AD 220), who both left public inscriptions.

In AD 330 Tanais was devastated by the Goths
Goths
The Goths were an East Germanic tribe of Scandinavian origin whose two branches, the Visigoths and the Ostrogoths, played an important role in the fall of the Roman Empire and the emergence of Medieval Europe....
, but the site was occupied continuously up to the second half of the 5th century AD. Increasingly, the channel silted up, probably the result of deforestation, and the center of active life shifted, perhaps to the small city of Azov
Azov
-External links:** *...
, halfway to Rostov.

The city was refounded around the 13th century by the Venetians
Republic of Venice
The Republic of Venice or Venetian Republic was a state originating from the city of Venice in Northeastern Italy. It existed for over a millennium, from the late 7th century until 1797. It was formally known as the Most Serene Republic of Venice and is often referred to as La Serenissima, in...
. Later it was acquired by the maritime Republic of Genoa
Republic of Genoa
The Most Serene Republic of Genoa |Ligurian]]: Repúbrica de Zêna) was an independent state from 1005 to 1797 in Liguria on the northwestern Italian coast, as well as Corsica from 1347 to 1768, and numerous other territories throughout the Mediterranean....
, of which it was an important place for tradings with the Golden Horde
Golden Horde
The Golden Horde was a Mongol and later Turkicized khanate that formed the north-western sector of the Mongol Empire...
. It decayed against after 1368. In 1392 it was conquered by Timur
Timur
Timur , historically known as Tamerlane in English , was a 14th-century conqueror of West, South and Central Asia, and the founder of the Timurid dynasty in Central Asia, and great-great-grandfather of Babur, the founder of the Mughal Dynasty, which survived as the Mughal Empire in India until...
, by the Ottoman Turks
Ottoman Turks
The Ottoman Turks were the Turkish-speaking population of the Ottoman Empire who formed the base of the state's military and ruling classes. Reliable information about the early history of Ottoman Turks is scarce, but they take their Turkish name, Osmanlı , from the house of Osman I The Ottoman...
in 1471, by the Russians
Russian Empire
The Russian Empire was a state that existed from 1721 until the Russian Revolution of 1917. It was the successor to the Tsardom of Russia and the predecessor of the Soviet Union...
in 1696, again by the Turks in 1711 and by the Russian Empire in 1771. 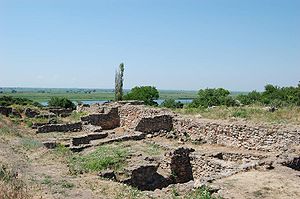 In 1823, I.A. Stempkovsky first made a connection between the visible archaeological remains, which were mostly Roman in date, and the "Tanais" mentioned in the ancient Greek sources.

Systematic modern excavations began in 1955. A joint Russian-German team has recently been excavating at the site of Tanais, with the aim of revealing the heart of the city, the agora
Agora
The Agora was an open "place of assembly" in ancient Greek city-states. Early in Greek history , free-born male land-owners who were citizens would gather in the Agora for military duty or to hear statements of the ruling king or council. Later, the Agora also served as a marketplace where...
, and defining the extent of Hellenistic influence on the urbanism of the Bosporan Greek city, as well as studying defensive responses to the surrounding nomadic cultures.

In his last book Jakten på Odin
Jakten på Odin
The Search for Odin is the project title of Thor Heyerdahl's last series of archaeological excavations, which took place in Azov in Russia.- Theoretical background :...
Thor Heyerdahl
Thor Heyerdahl
Thor Heyerdahl was a Norwegian ethnographer and adventurer with a background in zoology and geography. He became notable for his Kon-Tiki expedition, in which he sailed by raft from South America to the Tuamotu Islands...
advanced a highly controversial idea postulating connections between Tanais and ancient Scandinavia
Scandinavia
Scandinavia is a cultural, historical and ethno-linguistic region in northern Europe that includes the three kingdoms of Denmark, Norway and Sweden, characterized by their common ethno-cultural heritage and language. Modern Norway and Sweden proper are situated on the Scandinavian Peninsula,...
. In preparation of the book he conducted some archaeological research on the site of Tanais.