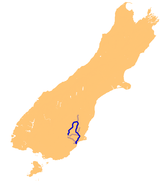 The Taieri River is the fourth-longest river in New Zealand
New Zealand
New Zealand is an island country in the south-western Pacific Ocean comprising two main landmasses and numerous smaller islands. The country is situated some east of Australia across the Tasman Sea, and roughly south of the Pacific island nations of New Caledonia, Fiji, and Tonga...
and is located in Otago
Otago
Otago is a region of New Zealand in the south of the South Island. The region covers an area of approximately making it the country's second largest region. The population of Otago is...
in the South Island
South Island
The South Island is the larger of the two major islands of New Zealand, the other being the more populous North Island. It is bordered to the north by Cook Strait, to the west by the Tasman Sea, to the south and east by the Pacific Ocean...
. Rising in the Lammerlaw ranges, it initially flows north, then east around the Rock and Pillar range before turning southeast, reaching the sea 30 km south of Dunedin
Dunedin
Dunedin is the second-largest city in the South Island of New Zealand, and the principal city of the Otago Region. It is considered to be one of the four main urban centres of New Zealand for historic, cultural, and geographic reasons. Dunedin was the largest city by territorial land area until...
.

The upper reaches meander in a series of convoluted loops across a floodplain near Paerau
Paerau
Paerau is a small settlement in inland Otago in New Zealand's South Island. It is located in the upper valley of the Taieri River), at the foot of the Rock and Pillar Range...
before running through two small hydroelectric power stations before Patearoa
Patearoa
Patearoa is a small settlement in inland Otago in New Zealand's South Island. It is located 20 kilometres southwest of Ranfurly, in the Maniototo and was originally known as Sowburn....
in the Maniototo
Maniototo
The Maniototo Plain, usually simply known as The Maniototo, is an elevated inland region in Otago, New Zealand. The region roughly surrounds the upper reaches of the Taieri River and the Manuherikia River. It is bounded by the Kakanui Range to the north and the Rock and Pillar Range to the southeast...
. The Taieri then arcs through almost 180 degrees, entering a broad glacial valley the Strath-Taieri
Strath-Taieri, New Zealand
The Strath-Taieri is a large glacial valley and river plateau, surrounded by rugged hill ranges located to the north and west of Otago Harbour. Since 1989 it has been part of the city of Dunedin...
, surrounded by rugged hill ranges. Immediately downstream the river has cut a steep-sided declivity — the Taieri Gorge
Taieri Gorge
The Taieri Gorge is located on the Taieri River, in the South Island of New Zealand.It is a deep canyon carved by the Taieri River on the middle stage of its journey from Central Otago to the Pacific Ocean, between the high plateau of the Maniototo and the coastal Taieri Plains.The Taieri Gorge...
. This is known for the Taieri Gorge Railway
Taieri Gorge Railway
The Taieri Gorge Railway is a railway line and tourist train operation based at Dunedin Railway Station in the South Island of New Zealand...
, which follows a route into Central Otago
Central Otago
Central Otago is the inland part of the New Zealand region of Otago in the South Island. The area commonly known as Central Otago includes both the Central Otago District and the Queenstown-Lakes District to the west....
through it. In the Taieri's lower reaches there is a broad floodplain (the Taieri Plains
Taieri Plains
The Taieri Plains are an area of fertile agricultural land to the southwest of Dunedin, in Otago, New Zealand. The plains cover an area of some 300 square kilometres, with a maximum extent of 30 kilometres....
) containing much of Otago
Otago
Otago is a region of New Zealand in the south of the South Island. The region covers an area of approximately making it the country's second largest region. The population of Otago is...
's most fertile farmland. The river then flows through the lower Taieri Gorge to the Pacific Ocean
Pacific Ocean
The Pacific Ocean is the largest of the Earth's oceanic divisions. It extends from the Arctic in the north to the Southern Ocean in the south, bounded by Asia and Australia in the west, and the Americas in the east.At 165.2 million square kilometres in area, this largest division of the World...
at Taieri Mouth. Taieri Island lies in the Pacific Ocean several hundred metres from the mouth of the river.

The Taieri is 200 km long of which the last 20 km are navigable. Towns along the river include Middlemarch
Middlemarch, New Zealand
Middlemarch is a small town within the limits of Dunedin city in New Zealand with 300 inhabitants. It lies some 80km to the west of the city centre, at the foot of the Rock and Pillar Range of hills in the broad Strath-Taieri valley, through which flows the middle reaches of the Taieri...
, Outram
Outram, New Zealand
Outram is a rural suburb of Dunedin, New Zealand, with a population of 642 . It is located 28 kilometres west of the central city at the edge of the Taieri Plains, close to the foot of Maungatua. The Taieri River flows close to the southeast of the town...
, Mosgiel, Henley
Henley, New Zealand
Henley is a township on New Zealand's Taieri Plains, presumably named after the rowing centre Henley-on-Thames in England. It lies close to the confluence of the Taieri and Waipori Rivers at the eastern edge of the plain, at the foot of a low range of coastal hills.Henley is near the south-west...
and Taieri Mouth
Taieri Mouth
Taieri Mouth is a small fishing village at the mouth of the Taieri River, New Zealand. Taieri Island lies in the ocean several hundred metres off the river's mouth.It has a white sand beach for swimming and several picnic areas...
. Its major tributary is the Waipori River
Waipori River
The Waipori River is located in Otago in the South Island of New Zealand. Rising in the Lammerlaw Range, it flows southeast for 50 kilometres before joining the Taieri River near Henley, 30 km southwest of Dunedin of which it is officially the southernmost border.The upper reaches of the Waipori...
, which meets the Taieri near Henley on the Taieri Plains.

The name "Taieri" is thought to come from the Māori
Maori language
Māori or te reo Māori , commonly te reo , is the language of the indigenous population of New Zealand, the Māori. It has the status of an official language in New Zealand...
word taiari meaning "spring tide".