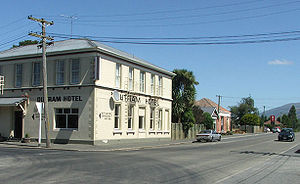 Outram is a rural suburb of Dunedin
Dunedin
Dunedin is the second-largest city in the South Island of New Zealand, and the principal city of the Otago Region. It is considered to be one of the four main urban centres of New Zealand for historic, cultural, and geographic reasons. Dunedin was the largest city by territorial land area until...
, New Zealand
New Zealand
New Zealand is an island country in the south-western Pacific Ocean comprising two main landmasses and numerous smaller islands. The country is situated some east of Australia across the Tasman Sea, and roughly south of the Pacific island nations of New Caledonia, Fiji, and Tonga...
, with a population of 642 (2006 Census). It is located 28 kilometres west of the central city at the edge of the Taieri Plains
Taieri Plains
The Taieri Plains are an area of fertile agricultural land to the southwest of Dunedin, in Otago, New Zealand. The plains cover an area of some 300 square kilometres, with a maximum extent of 30 kilometres....
, close to the foot of Maungatua
Maungatua
Often incorrectly called The Maungatuas or The Maungatua Range, Maungatua is a prominent ridge which dominates the skyline of the Taieri Plains in Otago, New Zealand...
. The Taieri River
Taieri River
The Taieri River is the fourth-longest river in New Zealand and is located in Otago in the South Island. Rising in the Lammerlaw ranges, it initially flows north, then east around the Rock and Pillar range before turning southeast, reaching the sea 30 km south of Dunedin.The upper reaches meander...
flows close to the southeast of the town. Outram lies on State Highway 87
New Zealand State Highway network
The New Zealand State Highway network is the major national highway network in New Zealand. Just under 100 roads in both the North and South Islands are State Highways...
between Mosgiel
Mosgiel
Mosgiel is an urban satellite of Dunedin in Otago, New Zealand, fifteen kilometres west of the city's centre. Since the re-organisation of New Zealand local government in 1989 it has been inside the Dunedin City Council area, but was physically separate from the contiguous suburbs until...
and Middlemarch
Middlemarch, New Zealand
Middlemarch is a small town within the limits of Dunedin city in New Zealand with 300 inhabitants. It lies some 80km to the west of the city centre, at the foot of the Rock and Pillar Range of hills in the broad Strath-Taieri valley, through which flows the middle reaches of the Taieri...
.

The original town was formed at a river crossing (ferry then bridge) on a route to the Central Otago
Central Otago
Central Otago is the inland part of the New Zealand region of Otago in the South Island. The area commonly known as Central Otago includes both the Central Otago District and the Queenstown-Lakes District to the west....
goldfields.
The village was moved following a flood in the late 19th century and relocated to its current location.
It was the first town in New Zealand to have electric street lights and still has the towns library.
From 1877 until 1953, Outram was served by a branch line
Branch line
A branch line is a secondary railway line which branches off a more important through route, usually a main line. A very short branch line may be called a spur line...
railway that connected with the Main South Line
Main South Line
The Main South Line, sometimes referred to as part of the South Island Main Trunk Railway, is a railroad line that runs north and south from Lyttelton in New Zealand through Christchurch and along the east coast of the South Island to Invercargill via Dunedin...
. This line was known as the Outram Branch
Outram Branch
The Outram Branch was a branch line railway near Dunedin, Otago that operated from 1877 to 1953 and formed part of New Zealand's national rail network.-Construction:...
and it had a relatively unremarkable career. Closure came as a result of an almost total absence of traffic caused by the development of road transport during the first half of the 20th century, and today, few remnants of the line are visible.

Outram's facilities include Outram Primary School, Outram Library, West Taieri Rugby Club, Church, Memorial Hall, Outram Hotel, a handful of retail outlets including a cafe and some antique shops. The West Taieri Cemetery is on the outskirts of the town. Outram is administered by Dunedin City Council, and has reticulated water supply, but no reticulated sewerage.
The source of this article is wikipedia, the free encyclopedia.  The text of this article is licensed under the GFDL.