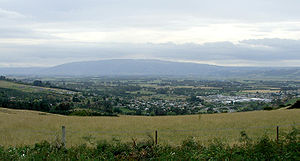 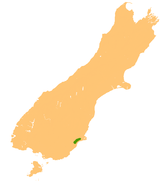 The Taieri Plains are an area of fertile agricultural land to the southwest of Dunedin
Dunedin
Dunedin is the second-largest city in the South Island of New Zealand, and the principal city of the Otago Region. It is considered to be one of the four main urban centres of New Zealand for historic, cultural, and geographic reasons. Dunedin was the largest city by territorial land area until...
, in Otago
Otago
Otago is a region of New Zealand in the south of the South Island. The region covers an area of approximately making it the country's second largest region. The population of Otago is...
, New Zealand
New Zealand
New Zealand is an island country in the south-western Pacific Ocean comprising two main landmasses and numerous smaller islands. The country is situated some east of Australia across the Tasman Sea, and roughly south of the Pacific island nations of New Caledonia, Fiji, and Tonga...
. The plains cover an area of some 300 square kilometres, with a maximum extent of 30 kilometres.

The floodplains of the Taieri
Taieri River
The Taieri River is the fourth-longest river in New Zealand and is located in Otago in the South Island. Rising in the Lammerlaw ranges, it initially flows north, then east around the Rock and Pillar range before turning southeast, reaching the sea 30 km south of Dunedin.The upper reaches meander...
and Waipori River
Waipori River
The Waipori River is located in Otago in the South Island of New Zealand. Rising in the Lammerlaw Range, it flows southeast for 50 kilometres before joining the Taieri River near Henley, 30 km southwest of Dunedin of which it is officially the southernmost border.The upper reaches of the Waipori...
s, the plains are enclosed to the west by the Maungatua
Maungatua
Often incorrectly called The Maungatuas or The Maungatua Range, Maungatua is a prominent ridge which dominates the skyline of the Taieri Plains in Otago, New Zealand...
and Silverpeaks
Silverpeaks
The Silverpeaks is an area of rough forest and tussock and scrub covered hill country inland and to the northwest of Dunedin, New Zealand...
Ranges, and to the south and east by a low range of coastal hills.

Dairy
Dairy farming
Dairy farming is a class of agricultural, or an animal husbandry, enterprise, for long-term production of milk, usually from dairy cows but also from goats and sheep, which may be either processed on-site or transported to a dairy factory for processing and eventual retail sale.Most dairy farms...
and sheep farming dominate the agriculture of the plains, although deer
Deer
Deer are the ruminant mammals forming the family Cervidae. Species in the Cervidae family include white-tailed deer, elk, moose, red deer, reindeer, fallow deer, roe deer and chital. Male deer of all species and female reindeer grow and shed new antlers each year...
is starting to have an economic impact. The alluvial nature of the land means that floods are not uncommon, especially in the area around the confluence of the two rivers. Stopbanks protect farmland, houses and Dunedin International Airport
Dunedin International Airport
Dunedin International Airport is an international airport in the Otago region of the South Island of New Zealand, serving Dunedin city and the Otago and Southland regions. Dunedin International Airport is one of two international airports in Otago, the other being Queenstown International Airport...
at Momona
Momona
Momona is a small town in New Zealand's South Island. It is located in the centre of the fertile floodplain of the Taieri River ....
. State Highway 1
State Highway 1 (New Zealand)
State Highway 1 is the longest and most significant road in the New Zealand roading network, running the length of both main islands. It appears on road maps as SH 1 and on road signs as a white number 1 on a red shield, but it has the official designations SH 1N in the North Island, SH 1S in the...
crosses parts of the plain along some of the stopbanks, with the result that this stretch of road is known locally as The "floodfree" highway.

New Zealand's lowest point, at 2m below sea level, is slightly north of the airport on Kirks Drain Road.

To the northeast, the city of Dunedin is separated from the Taieri Plains by a range of rugged hills which are part of the crater of an extinct volcano
Volcano
2. Bedrock3. Conduit 4. Base5. Sill6. Dike7. Layers of ash emitted by the volcano8. Flank| 9. Layers of lava emitted by the volcano10. Throat11. Parasitic cone12. Lava flow13. Vent14. Crater15...
. At the northeastern limit of the plain lies the town of Mosgiel
Mosgiel
Mosgiel is an urban satellite of Dunedin in Otago, New Zealand, fifteen kilometres west of the city's centre. Since the re-organisation of New Zealand local government in 1989 it has been inside the Dunedin City Council area, but was physically separate from the contiguous suburbs until...
, officially part of the city of Dunedin. Other settlements and towns on the plains include Outram
Outram, New Zealand
Outram is a rural suburb of Dunedin, New Zealand, with a population of 642 . It is located 28 kilometres west of the central city at the edge of the Taieri Plains, close to the foot of Maungatua. The Taieri River flows close to the southeast of the town...
, Henley
Henley, New Zealand
Henley is a township on New Zealand's Taieri Plains, presumably named after the rowing centre Henley-on-Thames in England. It lies close to the confluence of the Taieri and Waipori Rivers at the eastern edge of the plain, at the foot of a low range of coastal hills.Henley is near the south-west...
, Allanton
Allanton
Allanton is a small town in Otago, New Zealand, located some 20 kilometres southwest of Dunedin on State Highway 1. The settlement lies at the eastern edge of the Taieri Plains close to the Taieri River at the junction of the main road to Dunedin International Airport at Momona.Established near the...
, and Momona
Momona
Momona is a small town in New Zealand's South Island. It is located in the centre of the fertile floodplain of the Taieri River ....
.

To the southwest, a short stretch of rolling hill country separates the Taieri Plains from South Otago
South Otago
South Otago lies in the south east of the South Island of New Zealand. As the name suggests, it forms the southernmost part of the geographical region of Otago....
's other main lowland areas around the Tokomairiro River
Tokomairiro River
The Tokomairiro River is located in Otago, New Zealand. It flows southeast for some 50 kilometres , reaching the Pacific Ocean at Toko Mouth 50 kilometres south of Dunedin...
and Clutha River
Clutha River
The Clutha River / Mata-Au is the second longest river in New Zealand flowing south-southeast through Central and South Otago from Lake Wanaka in the Southern Alps to the Pacific Ocean, south west of Dunedin. It is the highest volume river in New Zealand, and the swiftest, with a catchment of ,...
. The twin lakes of Waihola
Lake Waihola
Lake Waihola is a tidal freshwater lake located 15 km north of Milton in Otago, in New Zealand's South Island. Its area is some 9 square kilometres, with a maximum length of 6 kilometres....
and Waipori
Lake Waipori
Lake Waipori is the smaller and shallower of the pair of lakes located in the wetlands to the south west of Dunedin in New Zealand on the Waipori River. The Waipori River is a major tributary of the Taieri River, and these wetlands form the southern edge of the Taieri Plains.The lake is inhabited...
sit within these hills.