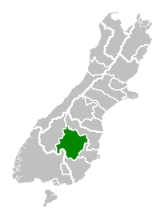 Encyclopedia
Central Otago is the inland part of the New Zealand
New Zealand
New Zealand is an island country in the south-western Pacific Ocean comprising two main landmasses and numerous smaller islands. The country is situated some east of Australia across the Tasman Sea, and roughly south of the Pacific island nations of New Caledonia, Fiji, and Tonga...
region
Regions of New Zealand
The region is the top tier of local government in New Zealand. There are 16 regions of New Zealand. Eleven are governed by an elected regional council, while five are governed by territorial authorities which also perform the functions of a regional council and thus are known as unitary authorities...
of Otago
Otago
Otago is a region of New Zealand in the south of the South Island. The region covers an area of approximately making it the country's second largest region. The population of Otago is...
in the South Island
South Island
The South Island is the larger of the two major islands of New Zealand, the other being the more populous North Island. It is bordered to the north by Cook Strait, to the west by the Tasman Sea, to the south and east by the Pacific Ocean...
. The area commonly known as Central Otago includes both the Central Otago District and the Queenstown-Lakes District to the west.

The area is dominated by mountain ranges and the upper reaches of the Clutha River
Clutha River
The Clutha River / Mata-Au is the second longest river in New Zealand flowing south-southeast through Central and South Otago from Lake Wanaka in the Southern Alps to the Pacific Ocean, south west of Dunedin. It is the highest volume river in New Zealand, and the swiftest, with a catchment of ,...
and tributaries. The wide flat plateau of the Maniototo
Maniototo
The Maniototo Plain, usually simply known as The Maniototo, is an elevated inland region in Otago, New Zealand. The region roughly surrounds the upper reaches of the Taieri River and the Manuherikia River. It is bounded by the Kakanui Range to the north and the Rock and Pillar Range to the southeast...
which lies between the upper reaches of the Taieri River
Taieri River
The Taieri River is the fourth-longest river in New Zealand and is located in Otago in the South Island. Rising in the Lammerlaw ranges, it initially flows north, then east around the Rock and Pillar range before turning southeast, reaching the sea 30 km south of Dunedin.The upper reaches meander...
and the Clutha's northern tributary the Manuherikia
Manuherikia River
The Manuherikia River is located in Otago in the South Island of New Zealand. It rises in the far north of the Maniototo, flowing southwest for 85 kilometres before its confluence with the Clutha River at Alexandra. During the 1860s the Manuherikia was one of the centres of the Central Otago Gold...
is also usually considered part of Central Otago.

Characterised by cold winters and hot, dry summers, the area is only lightly populated, although there has recently been considerable development around the tourist towns of Queenstown
Queenstown, New Zealand
Queenstown is a resort town in Otago in the south-west of New Zealand's South Island. It is built around an inlet called Queenstown Bay on Lake Wakatipu, a long thin Z-shaped lake formed by glacial processes, and has spectacular views of nearby mountains....
and Wanaka
Wanaka
Wanaka is a town in the Otago region of the South Island of New Zealand. It is situated at the southern end of Lake Wanaka, adjacent to the outflow of the lake to the Clutha River. It is the gateway to Mount Aspiring National Park. Wanaka is primarily a resort town but has both summer and winter...
. First significant European occupation came with the discovery of gold
Gold
Gold is a chemical element with the symbol Au and an atomic number of 79. Gold is a dense, soft, shiny, malleable and ductile metal. Pure gold has a bright yellow color and luster traditionally considered attractive, which it maintains without oxidizing in air or water. Chemically, gold is a...
at Gabriel's Gully
Gabriel's Gully
Gabriel's Gully is a locality in Otago, New Zealand, three kilometres from Lawrence township and close to the Tuapeka River.The discovery of gold at Gabriel's Gully by Gabriel Read in May 1861 led to the Central Otago goldrush...
near Lawrence
Lawrence, New Zealand
Lawrence is a small town of 474 inhabitants in Otago, in New Zealand's South Island. It is located on State Highway 8, the main route from Dunedin to the inland towns of Queenstown and Alexandra...
in 1861, which led to the Central Otago goldrush. Other towns and villages include Albert Town
Albert Town, New Zealand
Albert Town is located to the east of Wanaka in Otago, New Zealand. Until recently only a farming settlement, the population boom in this area has led to much new development. The confluence of the Clutha and Cardrona Rivers is located here. The town was named after Prince Albert of Saxe-Coburg and...
, Alexandra
Alexandra, New Zealand
Alexandra is a town in the Central Otago district of the Otago region of New Zealand. It is located on the banks of the Clutha River , on State Highway 8, 188 km by road from Dunedin and 33 km south of Cromwell.At the time of the 2006 census, the permanent population was 4,827, an...
, Arrowtown
Arrowtown
Arrowtown is a historic gold mining town in the Otago region of the South Island of New Zealand. Arrowtown is located on the banks of the Arrow River approximately 5 km from State Highway 6...
, Bannockburn
Bannockburn, New Zealand
Bannockburn is a small historic gold mining town located outside of Cromwell in Central Otago, New Zealand.The area was first made known as a rich alluvial gold field and was mined extensively in the 1860s....
, Clyde
Clyde, New Zealand
Clyde is a small town in Central Otago, New Zealand with a population of 918 in 2006. It is located on the Clutha River, between Cromwell and Alexandra....
, Cromwell
Cromwell, New Zealand
Cromwell is a town in Central Otago in the Otago region of New Zealand.It is situated between State Highway 6 and State Highway 8 leading to the Lindis Pass, 75 km northeast, and Alexandra, 33 km south. The road to Alexandra winds through the Cromwell Gorge...
, Hawea
Hawea
Hawea is the name of a small settlement at the southern end of Lake Hawea, in New Zealand's South Island. It is located 18 kilometres to the northeast of Wanaka....
, Millers Flat
Millers Flat, New Zealand
Millers Flat is a small town in inland Otago, in the South Island of New Zealand. It is located on the Clutha River, 17 kilometres south of Roxburgh. Fruit growing is the main industry in the area. Most of the town lies on the north bank of the Clutha; the main road - State Highway 8 passes close...
, Naseby
Naseby, New Zealand
Naseby is a small town, formerly a borough, in the Maniototo area of Central Otago, New Zealand. It is named after a village in Northamptonshire, England....
, Omakau, Ranfurly
Ranfurly, New Zealand
Ranfurly is the largest settlement in the Maniototo district of Otago, New Zealand. Located 110 kilometres north of Dunedin, it lies in dry rough country at a moderately high altitude close to a small tributary of the Taieri River. It is a service town for the local farming community...
, Roxburgh
Roxburgh, New Zealand
Roxburgh is a small New Zealand town of about 600 people in Central Otago. It is in Teviot Valley on the banks of the Clutha River, 40 km south of Alexandra in the South Island. State Highway 8, which links Central Otago with Dunedin city, passes through the town...
, St. Bathans
Saint Bathans, New Zealand
The former gold and coal mining town of St Bathans, formerly named Dunstan Creek, lies deep in the heart of the Maniototo in New Zealand's Otago region. Mining has long ceased, and it is a tranquil holiday retreat. The preservation of many of its historic buildings makes it one of the region's more...
, and Wedderburn
Wedderburn, New Zealand
Wedderburn is a community in Central Otago, New Zealand. It is located 15 kilometres northwest of Ranfurly, and was at one time close to the centre of a thriving gold and coal mining area...
.

Since the 19th century, most of the area's economic activity has centred on sheep, stone fruit, and tourism. In recent years, deer
Deer
Deer are the ruminant mammals forming the family Cervidae. Species in the Cervidae family include white-tailed deer, elk, moose, red deer, reindeer, fallow deer, roe deer and chital. Male deer of all species and female reindeer grow and shed new antlers each year...
farms and vineyard
Vineyard
A vineyard is a plantation of grape-bearing vines, grown mainly for winemaking, but also raisins, table grapes and non-alcoholic grape juice...
s have increased the region's economic diversification. Recently the cool climate varieties Riesling
Riesling
Riesling is a white grape variety which originated in the Rhine region of Germany. Riesling is an aromatic grape variety displaying flowery, almost perfumed, aromas as well as high acidity. It is used to make dry, semi-sweet, sweet and sparkling white wines. Riesling wines are usually varietally...
and Pinot Noir
Pinot Noir
Pinot noir is a black wine grape variety of the species Vitis vinifera. The name may also refer to wines created predominantly from Pinot noir grapes...
have been recognised as being especially suitable, and as the vines age Central Otago wines
Central Otago Wine Region
At latitude 45° south, the Central Otago Wine Region is the most southerly wine producing region in the world. The vineyards are also the highest in New Zealand at 200 to 400 metres above sea level, on the floor of glacial valleys...
can be expected to improve even further, as the plantings are new and increasing rapidly. Central Otago is the world's southernmost commercial wine production region.

The Central Otago District Council, based in Alexandra, and the Queenstown Lakes District Council, based in Queenstown, administer territorial authority matters, while the Otago
Otago
Otago is a region of New Zealand in the south of the South Island. The region covers an area of approximately making it the country's second largest region. The population of Otago is...
Regional Council has overview of environmental matters such as clean air and water resources. The current mayor is Tony Lepper, who was the former Deputy Mayor of the district, and he was elected in 2010 at the local body elections, defeating the incumbent Malcolm MacPherson.

The colloquial name for Central Otago is simply "Central". Residents from the surrounding regions may not talk about being in Central Otago or going to Central Otago - instead referring to being or going "up Central" (this usage is mainly limited to residents of Canterbury
Canterbury, New Zealand
The New Zealand region of Canterbury is mainly composed of the Canterbury Plains and the surrounding mountains. Its main city, Christchurch, hosts the main office of the Christchurch City Council, the Canterbury Regional Council - called Environment Canterbury - and the University of Canterbury.-...
, Otago
Otago
Otago is a region of New Zealand in the south of the South Island. The region covers an area of approximately making it the country's second largest region. The population of Otago is...
and Southland
Southland Region
Southland is New Zealand's southernmost region and is also a district within that region. It consists mainly of the southwestern portion of the South Island and Stewart Island / Rakiura...
). The former Otago Central Railway, which ran through most of the major towns of Central Otago, was also referred to as 'the Central'.