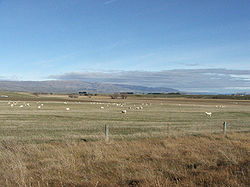 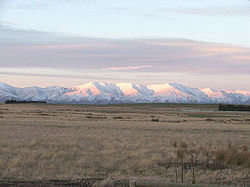 The Maniototo Plain, usually simply known as The Maniototo, is an elevated inland region in Otago
Otago
Otago is a region of New Zealand in the south of the South Island. The region covers an area of approximately making it the country's second largest region. The population of Otago is...
, New Zealand
New Zealand
New Zealand is an island country in the south-western Pacific Ocean comprising two main landmasses and numerous smaller islands. The country is situated some east of Australia across the Tasman Sea, and roughly south of the Pacific island nations of New Caledonia, Fiji, and Tonga...
. The region roughly surrounds the upper reaches of the Taieri River
Taieri River
The Taieri River is the fourth-longest river in New Zealand and is located in Otago in the South Island. Rising in the Lammerlaw ranges, it initially flows north, then east around the Rock and Pillar range before turning southeast, reaching the sea 30 km south of Dunedin.The upper reaches meander...
and the Manuherikia River
Manuherikia River
The Manuherikia River is located in Otago in the South Island of New Zealand. It rises in the far north of the Maniototo, flowing southwest for 85 kilometres before its confluence with the Clutha River at Alexandra. During the 1860s the Manuherikia was one of the centres of the Central Otago Gold...
. It is bounded by the Kakanui Range
Kakanui Range
The Kakanui Range is a range of high hills located inland from Oamaru in the South Island of New Zealand. The range forms a boundary between the valley of the Waitaki River to the north and the high plateau known as the Maniototo to the southwest. The highest point in the Kakanuis is Mt...
to the north and the Rock and Pillar Range
Rock and Pillar Range
The Rock and Pillar Range of high hills is located in the Maniototo, an area of inland Otago, New Zealand. They are surrounded by the Taieri River, which has its source in the range, flowing out across the scroll plain at Paerau, before almost doubling back on itself at Waipiata and flowing back...
to the southeast. It has a harsh, dry climate, ranging from over 30°C in mid-summer to -15°C in mid-winter.

The region is sparsely populated, with the largest centres being Ranfurly
Ranfurly, New Zealand
Ranfurly is the largest settlement in the Maniototo district of Otago, New Zealand. Located 110 kilometres north of Dunedin, it lies in dry rough country at a moderately high altitude close to a small tributary of the Taieri River. It is a service town for the local farming community...
, Naseby
Naseby, New Zealand
Naseby is a small town, formerly a borough, in the Maniototo area of Central Otago, New Zealand. It is named after a village in Northamptonshire, England....
, Omakau, and Ophir
Ophir, New Zealand
Omakau is a settlement in Central Otago, New Zealand, located between Alexandra and Ranfurly on the northwest bank of the Manuherikia River.The smaller settlement of Ophir, New Zealand is located on the opposite bank, three kilometres to the southeast....
.

Part of the Canterbury-Otago tussock grasslands
Canterbury-Otago tussock grasslands
The Canterbury-Otago tussock grasslands are an ecoregion of South Island, New Zealand.-Location and description:This ecoregion is a large area of dry grassy plains between the east coast and the Southern Alps that form the spine of South Island, in the regions of Canterbury and Otago...
the land surrounding the plain is hilly, with many outcrops of rock which also break up the plain in places. The scenery between Omakau and Ranfurly appeared in Peter Jackson
Peter Jackson
Sir Peter Robert Jackson, KNZM is a New Zealand film director, producer, actor, and screenwriter, known for his The Lord of the Rings film trilogy , adapted from the novel by J. R. R...
's The Lord of the Rings
The Lord of the Rings film trilogy
The Lord of the Rings is an epic film trilogy consisting of three fantasy adventure films based on the three-volume book of the same name by English author J. R. R. Tolkien. The films are The Fellowship of the Ring , The Two Towers and The Return of the King .The films were directed by Peter...
film trilogy as the location for many of the scenes set in Rohan
Rohan
Rohan is a realm in J. R. R. Tolkien's fantasy era of Middle-earth. It is a grassland which lies north of its ally Gondor and north-west of Mordor, the realm of Sauron, their enemy . It is inhabited by the Rohirrim, a people of herdsmen and farmers who are well-known for their horses and cavalry....
.

During the 1860s the region was one of the sites of the Central Otago goldrush, and relics from that era can still be seen around the towns of Kyeburn, Naseby
Naseby, New Zealand
Naseby is a small town, formerly a borough, in the Maniototo area of Central Otago, New Zealand. It is named after a village in Northamptonshire, England....
, and St. Bathans
Saint Bathans, New Zealand
The former gold and coal mining town of St Bathans, formerly named Dunstan Creek, lies deep in the heart of the Maniototo in New Zealand's Otago region. Mining has long ceased, and it is a tranquil holiday retreat. The preservation of many of its historic buildings makes it one of the region's more...
.

Sheep farming is the major source of income. The area is closely associated with the sport of curling
Curling
Curling is a sport in which players slide stones across a sheet of ice towards a target area. It is related to bowls, boule and shuffleboard. Two teams, each of four players, take turns sliding heavy, polished granite stones, also called "rocks", across the ice curling sheet towards the house, a...
. Naseby has the only indoor curling rink and the only natural luge track in the Southern Hemisphere.
The source of this article is wikipedia, the free encyclopedia.  The text of this article is licensed under the GFDL.