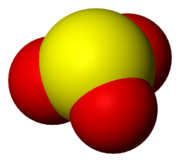 Sulfites are compounds
Chemical compound
A chemical compound is a pure chemical substance consisting of two or more different chemical elements that can be separated into simpler substances by chemical reactions. Chemical compounds have a unique and defined chemical structure; they consist of a fixed ratio of atoms that are held together...
that contain the sulfite ion
Ion
An ion is an atom or molecule in which the total number of electrons is not equal to the total number of protons, giving it a net positive or negative electrical charge. The name was given by physicist Michael Faraday for the substances that allow a current to pass between electrodes in a...
S
Sulfur
Sulfur or sulphur is the chemical element with atomic number 16. In the periodic table it is represented by the symbol S. It is an abundant, multivalent non-metal. Under normal conditions, sulfur atoms form cyclic octatomic molecules with chemical formula S8. Elemental sulfur is a bright yellow...
O
Oxygen
Oxygen is the element with atomic number 8 and represented by the symbol O. Its name derives from the Greek roots ὀξύς and -γενής , because at the time of naming, it was mistakenly thought that all acids required oxygen in their composition...
. The sulfite ion is the conjugate base of bisulfite
Bisulfite
Bisulfite ion is the ion HSO3−. Salts containing the HSO3− ion are termed bisulfites also known as sulfite lyes...
. Although the acid itself is elusive, its salts are widely used.

The structure of the sulfite anion can be described with three equivalent resonance structures. In each resonance structure, the sulfur atom is double-bonded to one oxygen atom with a formal charge
Formal charge
In chemistry, a formal charge is the charge assigned to an atom in a molecule, assuming that electrons in a chemical bond are shared equally between atoms, regardless of relative electronegativity....
of zero (neutral), and sulfur is singly bonded to the other two oxygen atoms, which each carry a formal charge of −1, together accounting for the −2 charge on the anion. There is also a non-bonded lone pair
Lone pair
In chemistry, a lone pair is a valence electron pair without bonding or sharing with other atoms. They are found in the outermost electron shell of an atom, so lone pairs are a subset of a molecule's valence electrons...
on the sulfur, so the structure predicted by VSEPR theory
VSEPR theory
Valence shell electron pair repulsion theory is a model in chemistry used to predict the shape of individual molecules based upon the extent of electron-pair electrostatic repulsion. It is also named Gillespie–Nyholm theory after its two main developers...
is trigonal pyramidal, as in ammonia
Ammonia
Ammonia is a compound of nitrogen and hydrogen with the formula . It is a colourless gas with a characteristic pungent odour. Ammonia contributes significantly to the nutritional needs of terrestrial organisms by serving as a precursor to food and fertilizers. Ammonia, either directly or...
(NH3). In the hybrid resonance structure, the S-O bonds are equivalently of bond order
Bond order
Bond order is the number of chemical bonds between a pair of atoms. For example, in diatomic nitrogen N≡N the bond order is 3, while in acetylene H−C≡C−H the bond order between the two carbon atoms is also 3, and the C−H bond order is 1. Bond order gives an indication to the stability of a bond....
one and one-third.

Sulfites occur naturally in all wine
Wine
Wine is an alcoholic beverage, made of fermented fruit juice, usually from grapes. The natural chemical balance of grapes lets them ferment without the addition of sugars, acids, enzymes, or other nutrients. Grape wine is produced by fermenting crushed grapes using various types of yeast. Yeast...
s to some extent. Sulfites are commonly introduced to arrest fermentation
Fermentation (wine)
The process of fermentation in wine turns grape juice into an alcoholic beverage. During fermentation, yeast interact with sugars in the juice to create ethanol, commonly known as ethyl alcohol, and carbon dioxide...
at a desired time, and may also be added to wine as preservative
Preservative
A preservative is a naturally occurring or synthetically produced substance that is added to products such as foods, pharmaceuticals, paints, biological samples, wood, etc. to prevent decomposition by microbial growth or by undesirable chemical changes....
s to prevent spoilage and oxidation at several stages of the winemaking
Winemaking
Winemaking, or vinification, is the production of wine, starting with selection of the grapes or other produce and ending with bottling the finished wine. Although most wine is made from grapes, it may also be made from other fruit or non-toxic plant material...
. Sulfur dioxide (SO2, sulfur with two atoms of oxygen) protects wine from not only oxidation, but also bacteria. Without sulfur, grape juice would turn to vinegar.

Organic
Organic food
Organic foods are foods that are produced using methods that do not involve modern synthetic inputs such as synthetic pesticides and chemical fertilizers, do not contain genetically modified organisms, and are not processed using irradiation, industrial solvents, or chemical food additives.For the...
wines are not necessarily sulfite-free. In general, sweet (dessert) wines contain more sulfites than dry wines, and white wines contain more sulfites than red wines.

In the United States, wines bottled after mid-1987 must have a label stating that they contain sulfites if they contain more than 10 parts per million.

In the European Union an equivalent regulation came into force in November 2005.

Sulfites are often used as preservative
Preservative
A preservative is a naturally occurring or synthetically produced substance that is added to products such as foods, pharmaceuticals, paints, biological samples, wood, etc. to prevent decomposition by microbial growth or by undesirable chemical changes....
s in dried fruit
Dried fruit
Dried fruit is fruit where the majority of the original water content has been removed either naturally, through sun drying, or through the use of specialized dryers or dehydrators. Dried fruit has a long tradition of use dating back to the fourth millennium BC in Mesopotamia, and is prized...
s, preserved radish
Radish
The radish is an edible root vegetable of the Brassicaceae family that was domesticated in Europe, in pre-Roman times. They are grown and consumed throughout the world. Radishes have numerous varieties, varying in size, color and duration of required cultivation time...
, and dried potato
Potato
The potato is a starchy, tuberous crop from the perennial Solanum tuberosum of the Solanaceae family . The word potato may refer to the plant itself as well as the edible tuber. In the region of the Andes, there are some other closely related cultivated potato species...
products.

Most beer
Beer
Beer is the world's most widely consumed andprobably oldest alcoholic beverage; it is the third most popular drink overall, after water and tea. It is produced by the brewing and fermentation of sugars, mainly derived from malted cereal grains, most commonly malted barley and malted wheat...
s no longer contain sulfites. Although shrimp
Shrimp
Shrimp are swimming, decapod crustaceans classified in the infraorder Caridea, found widely around the world in both fresh and salt water. Adult shrimp are filter feeding benthic animals living close to the bottom. They can live in schools and can swim rapidly backwards. Shrimp are an important...
are sometimes treated with sulfites on fishing vessels, the chemical may not appear on the label. In 1986, the Food and Drug Administration
Food and Drug Administration
The Food and Drug Administration is an agency of the United States Department of Health and Human Services, one of the United States federal executive departments...
in the United States banned the addition of sulfites to all fresh fruit and vegetables that are eaten raw.

Sulfites are used in increasing amounts as a food preservative
Preservative
A preservative is a naturally occurring or synthetically produced substance that is added to products such as foods, pharmaceuticals, paints, biological samples, wood, etc. to prevent decomposition by microbial growth or by undesirable chemical changes....
or enhancer. They may come in various forms, such as:


Sulfites are counted among the top nine food allergens, but a reaction to sulfite is not a true allergy. Some people (but not many) have positive skin allergy tests to sulfites indicating true (IgE-mediated) allergy. It may cause breathing difficulty within minutes after eating a food containing it, asthma
Asthma
Asthma is the common chronic inflammatory disease of the airways characterized by variable and recurring symptoms, reversible airflow obstruction, and bronchospasm. Symptoms include wheezing, coughing, chest tightness, and shortness of breath...
tics and possibly people with salicylate sensitivity
Salicylate sensitivity
Salicylate sensitivity, also known as salicylate intolerance, is any adverse effect that occurs when a normal amount of salicylate is introduced into a person's body...
(or aspirin
Aspirin
Aspirin , also known as acetylsalicylic acid , is a salicylate drug, often used as an analgesic to relieve minor aches and pains, as an antipyretic to reduce fever, and as an anti-inflammatory medication. It was discovered by Arthur Eichengrun, a chemist with the German company Bayer...
sensitivity) are at an elevated risk for reaction to sulfites. Anaphalaxis and life threatening reactions are rare. Other symptoms include sneezing, swelling of the throat
Throat
In vertebrate anatomy, the throat is the anterior part of the neck, in front of the vertebral column. It consists of the pharynx and larynx...
, and hives.

In the U.S., labeling regulations do not require products to indicate the presence of sulfites in foods unless it is added specifically as a preservative; however, many companies voluntarily label sulfite-containing foods. Sulfites used in food processing but not specifically added as a preservative are only required to be listed if there are more than 10 parts per million (ppm) in the finished product. The products most likely to contain sulfites (fruits and alcoholic beverages less than 10ppm) do not require ingredients labels, so the presence of sulfites is usually undisclosed. In 1986, the U.S. Food and Drug Administration banned the use of sulfites as preservatives on foods intended to be eaten fresh (such as salad ingredients). This has contributed to the increased use of erythorbic acid
Erythorbic acid
Erythorbic acid, formerly known as isoascorbic acid and D-araboascorbic acid, is a stereoisomer of ascorbic acid . It is a vegetable-derived food additive produced from sucrose. It is denoted by E number E315, and is widely used as an antioxidant in processed foods.Clinical trials have been...
and its salts
Sodium erythorbate
Sodium erythorbate is a food additive used predominantly in meats, poultry, and soft drinks. Chemically, it is the sodium salt of erythorbic acid. Sodium Erythorbate is structurally related to Vitamin C and is a antioxidant...
as preservatives.

Sulfites are widely used to extend the shelf life of products. Because it is often difficult to know whether a food contains sulfites, many people do not realize they may have a sensitivity to sulfite. Sulfites are also known to destroy vitamin B1 (thiamin), a vitamin essential for metabolism of carbohydrates and alcohol.