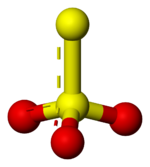 Thiosulfate (IUPAC-recommended spelling; also thiosulphate in British English) is an oxyanion of sulfur. The prefix thio
Thio
The prefix thio-, when applied to a chemical, such as an ion, means that an oxygen atom in the compound has been replaced by a sulfur atom. This meaning is especially valid in organic chemistry. For example, the word ether refers to an oxygen-containing compound having the general chemical...
indicates that thiosulfate ion is a sulfate
Sulfate
In inorganic chemistry, a sulfate is a salt of sulfuric acid.-Chemical properties:...
ion with one oxygen replaced by a sulfur. Thiosulfate occurs naturally and is produced by certain biochemical processes. It rapidly dechlorinates water and is notable for its use to halt bleaching in the paper-making industry. Thiosulfate is also useful in smelting silver ore, in producing leather goods, and to set dyes in textiles. Sodium thiosulfate
Sodium thiosulfate
Sodium thiosulfate , also spelled sodium thiosulphate, is a colorless crystalline compound that is more familiar as the pentahydrate, Na2S2O3•5H2O, an efflorescent, monoclinic crystalline substance also called sodium hyposulfite or “hypo.”...
, commonly called hypo ("Hyposulfite
Hyposulfite
Hyposulfite, SO22−, was reported as a sulfur oxyanion. However salts containing SO22− and the corresponding acid, hyposulfurous acid are not believed to exist.However, there are also some reports about hyposulfites...
"), was widely used in photography to fix
Photographic fixer
Photographic fixer is a chemical or a mix of chemicals used in the final step in the photographic processing of film or paper. The fixer stabilises the image, removing the unexposed silver halide remaining on the photographic film or photographic paper, leaving behind the reduced metallic silver...
black and white negatives and prints after the developing stage; modern 'rapid' fixers use ammonium thiosulfate as a fixing salt because it acts three to four times faster. Some bacteria can metabolise thiosulfates.

Thiosulfates are stable only in neutral or alkali
Alkali
In chemistry, an alkali is a basic, ionic salt of an alkali metal or alkaline earth metal element. Some authors also define an alkali as a base that dissolves in water. A solution of a soluble base has a pH greater than 7. The adjective alkaline is commonly used in English as a synonym for base,...
ne solutions, but not in acidic solutions, due to decomposition to sulfite
Sulfite
Sulfites are compounds that contain the sulfite ion SO. The sulfite ion is the conjugate base of bisulfite. Although the acid itself is elusive, its salts are widely used.-Structure:...
and sulfur
Sulfur
Sulfur or sulphur is the chemical element with atomic number 16. In the periodic table it is represented by the symbol S. It is an abundant, multivalent non-metal. Under normal conditions, sulfur atoms form cyclic octatomic molecules with chemical formula S8. Elemental sulfur is a bright yellow...
, the sulfite being dehydrated to sulfur dioxide
Sulfur dioxide
Sulfur dioxide is the chemical compound with the formula . It is released by volcanoes and in various industrial processes. Since coal and petroleum often contain sulfur compounds, their combustion generates sulfur dioxide unless the sulfur compounds are removed before burning the fuel...
:

This reaction may be used to generate an aqueous suspension
Suspension (chemistry)
In chemistry, a suspension is a heterogeneous fluid containing solid particles that are sufficiently large for sedimentation. Usually they must be larger than 1 micrometer. The internal phase is dispersed throughout the external phase through mechanical agitation, with the use of certain...
of sulfur and demonstrate the Rayleigh scattering
Rayleigh scattering
Rayleigh scattering, named after the British physicist Lord Rayleigh, is the elastic scattering of light or other electromagnetic radiation by particles much smaller than the wavelength of the light. The particles may be individual atoms or molecules. It can occur when light travels through...
of light
Light
Light or visible light is electromagnetic radiation that is visible to the human eye, and is responsible for the sense of sight. Visible light has wavelength in a range from about 380 nanometres to about 740 nm, with a frequency range of about 405 THz to 790 THz...
in physics
Physics
Physics is a natural science that involves the study of matter and its motion through spacetime, along with related concepts such as energy and force. More broadly, it is the general analysis of nature, conducted in order to understand how the universe behaves.Physics is one of the oldest academic...
. If white light is shone from below, blue light is seen from sideways and orange from above, due to the same mechanisms that color the sky at mid-day and dusk.

Thiosulfates react with halogens differently, which can be attributed the decrease of oxidizing power down the halogen group:

Thiosulfate causes rapid corrosion
Corrosion
Corrosion is the disintegration of an engineered material into its constituent atoms due to chemical reactions with its surroundings. In the most common use of the word, this means electrochemical oxidation of metals in reaction with an oxidant such as oxygen...
of metals; steel and stainless steel are particularly sensitive to pitting corrosion
Pitting corrosion
Pitting corrosion, or pitting, is a form of extremely localized corrosion that leads to the creation of small holes in the metal. The driving power for pitting corrosion is the depassivation of a small area, which becomes anodic while an unknown but potentially vast area becomes cathodic, leading...
induced by thiosulfate. Addition of molybdenum
Molybdenum
Molybdenum , is a Group 6 chemical element with the symbol Mo and atomic number 42. The name is from Neo-Latin Molybdaenum, from Ancient Greek , meaning lead, itself proposed as a loanword from Anatolian Luvian and Lydian languages, since its ores were confused with lead ores...
to stainless steel is needed to improve its resistance to pitting (AISI 316L hMo). Thiosulfates are also often produced by incomplete oxidation of sulfides (pyrite oxidation) or partial reduction of sulfate (Kraft paper
Kraft paper
Kraft paper or kraft is paper or paperboard produced from chemical pulp produced in the kraft process.Pulp produced by the kraft process is stronger than that made by other pulping processes; acidic sulfite processes degrade cellulose more, leading to weaker fibers, and mechanical pulping...
).

The natural occurrence of the thiosulfate group is practically restricted to a very rare mineral
Mineral
A mineral is a naturally occurring solid chemical substance formed through biogeochemical processes, having characteristic chemical composition, highly ordered atomic structure, and specific physical properties. By comparison, a rock is an aggregate of minerals and/or mineraloids and does not...
sidpietersite, Pb4(S2O3)O2(OH)2, as the presence of this anion in the mineral bazhenovite was recently disputed.

The systematic additive IUPAC
IUPAC nomenclature
A chemical nomenclature is a set of rules to generate systematic names for chemical compounds. The nomenclature used most frequently worldwide is the one created and developed by the International Union of Pure and Applied Chemistry ....
name is trioxidosulfidosulfate(2-), the name of its corresponding acid is dihydroxidooxidosulﬁdosulfur.
The source of this article is wikipedia, the free encyclopedia.  The text of this article is licensed under the GFDL.