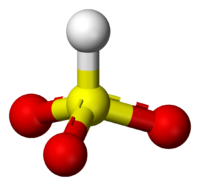 
Sulfurous acid is not an isolable compound and does not appear to exist in solution either. An equilibrium that is much more consistent with spectroscopic
Spectroscopy
Spectroscopy is the study of the interaction between matter and radiated energy. Historically, spectroscopy originated through the study of visible light dispersed according to its wavelength, e.g., by a prism. Later the concept was expanded greatly to comprise any interaction with radiative...
evidence is given :

HSO3− is a weakly acidic species with a pKa
Acid dissociation constant
An acid dissociation constant, Ka, is a quantitative measure of the strength of an acid in solution. It is the equilibrium constant for a chemical reaction known as dissociation in the context of acid-base reactions...
of 6.97. Its conjugate base is the sulfite
Sulfite
Sulfites are compounds that contain the sulfite ion SO. The sulfite ion is the conjugate base of bisulfite. Although the acid itself is elusive, its salts are widely used.-Structure:...
ion, SO32−:

Bisulfites are reducing agents, as are all sulfites and sulfur dioxide, which contains sulfur in the same oxidation state (+4).

Most evidence suggests that the proton in bisulfite ion is located on sulfur, giving rise to C3v symmetry
Molecular symmetry
Molecular symmetry in chemistry describes the symmetry present in molecules and the classification of molecules according to their symmetry. Molecular symmetry is a fundamental concept in chemistry, as it can predict or explain many of a molecule's chemical properties, such as its dipole moment...
. There is, however, some evidence from 17O
Oxygen-17
Oxygen-17 is a low abundant isotope of oxygen . Being the only stable isotope of oxygen possessing a nuclear spin and the unique characteristic of field-independent relaxation it enables NMR studies of metabolic pathways of compounds incorporating oxygen at high magnetic fields Oxygen-17 is a low...
NMR spectroscopy to suggest that two tautomeric forms of HSO3− exist in dynamic equilibrium, one having C3v symmetry (protonated at sulfur) and other Cs symmetry (protonated at oxygen). The C3v structure is supported by X-ray crystallography
X-ray crystallography
X-ray crystallography is a method of determining the arrangement of atoms within a crystal, in which a beam of X-rays strikes a crystal and causes the beam of light to spread into many specific directions. From the angles and intensities of these diffracted beams, a crystallographer can produce a...
and, in aqueous solution, by Raman spectroscopy
Raman spectroscopy
Raman spectroscopy is a spectroscopic technique used to study vibrational, rotational, and other low-frequency modes in a system.It relies on inelastic scattering, or Raman scattering, of monochromatic light, usually from a laser in the visible, near infrared, or near ultraviolet range...
(ν(S–H) = 2500 cm−1).

Bisulfite salts are common additives to the drug epinephrine
Epinephrine
Epinephrine is a hormone and a neurotransmitter. It increases heart rate, constricts blood vessels, dilates air passages and participates in the fight-or-flight response of the sympathetic nervous system. In chemical terms, adrenaline is one of a group of monoamines called the catecholamines...
in order to prevent its oxidation to adrenochrome
Adrenochrome
Adrenochrome, chemical formula C9H9NO3, is a pigment obtained by the oxidation of adrenaline . The derivative carbazochrome is a hemostatic medication.-Chemistry:...
and resulting inactivation. Bisulfites can sometimes cause an allergic reaction. This is different from the common sulfa drugs allergy.
The source of this article is wikipedia, the free encyclopedia.  The text of this article is licensed under the GFDL.