The Krkonoše Mountains have experienced growing tourism for winter sports during the past ten years. Their skiing resorts are becoming a budget alternative to the Alps
Alps
The Alps is one of the great mountain range systems of Europe, stretching from Austria and Slovenia in the east through Italy, Switzerland, Liechtenstein and Germany to France in the west....
.

The name Sudetes has been derived from Sudeti montes, a Latin
Latin
Latin is an Italic language originally spoken in Latium and Ancient Rome. It, along with most European languages, is a descendant of the ancient Proto-Indo-European language. Although it is considered a dead language, a number of scholars and members of the Christian clergy speak it fluently, and...
ization of the name Soudeta ore used in the Geographia
Geographia (Ptolemy)
The Geography is Ptolemy's main work besides the Almagest...
by Ptolemy
Ptolemy
Claudius Ptolemy , was a Roman citizen of Egypt who wrote in Greek. He was a mathematician, astronomer, geographer, astrologer, and poet of a single epigram in the Greek Anthology. He lived in Egypt under Roman rule, and is believed to have been born in the town of Ptolemais Hermiou in the...
(Book 2, Chapter 10) ca. 150 for the present-day northern Czech mountains. Ptolemy said that they were above the Gabreta Forest
Gabreta Forest
The Gabreta Forest is an ancient forest mentioned by the Greek geographers, Strabo and Ptolemy. In the former it is termed the hule megale Gabreta, or "large wood, Gabreta" , and in the latter, hule Gabreta, "Gabreta Wood"...
, which places them in the Sudetenland
Sudetenland
Sudetenland is the German name used in English in the first half of the 20th century for the northern, southwest and western regions of Czechoslovakia inhabited mostly by ethnic Germans, specifically the border areas of Bohemia, Moravia, and those parts of Silesia being within Czechoslovakia.The...
. Ptolemy wrote in Greek
Ancient Greek
Ancient Greek is the stage of the Greek language in the periods spanning the times c. 9th–6th centuries BC, , c. 5th–4th centuries BC , and the c. 3rd century BC – 6th century AD of ancient Greece and the ancient world; being predated in the 2nd millennium BC by Mycenaean Greek...
, in which the name is a neuter plural. Latin mons, however, is a masculine, hence Sudeti. The Latin version is likely to be a scholastic innovation, as it is not attested in classical Latin literature. 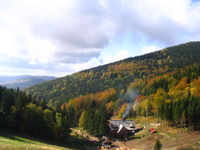 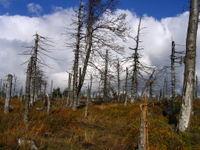 The Sudetes are usually divided into:

The exact location of the Sudetes has varied over the centuries. The ancient Sudeti meant at least the northwest frontier of today's Czech Republic, probably extending to the north. By implication, it was part of the vast Hercynian Forest
Hercynian Forest
The Hercynian Forest was an ancient and dense forest that stretched eastward from the Rhine River across southern Germany and formed the northern boundary of that part of Europe known to writers of antiquity. The ancient sources are equivocal about how far east it extended...
belt mentioned by several authors of the antiquity
Classical antiquity
Classical antiquity is a broad term for a long period of cultural history centered on the Mediterranean Sea, comprising the interlocking civilizations of ancient Greece and ancient Rome, collectively known as the Greco-Roman world...
.

In the Middle Ages German
Germans
The Germans are a Germanic ethnic group native to Central Europe. The English term Germans has referred to the German-speaking population of the Holy Roman Empire since the Late Middle Ages....
colonists were invited by the Piast
Silesian Piasts
The Silesian Piasts were the oldest line of the Piast dynasty beginning with Władysław II the Exile, son of Bolesław III Wrymouth, Duke of Poland...
dukes of Silesia
Duchy of Silesia
The Duchy of Silesia with its capital at Wrocław was a medieval duchy located in the historic Silesian region of Poland. Soon after it was formed under the Piast dynasty in 1138, it fragmented into various Duchies of Silesia. In 1327 the remaining Duchy of Wrocław as well as most other duchies...
and the Přemyslid kings of Bohemia
Kingdom of Bohemia
The Kingdom of Bohemia was a country located in the region of Bohemia in Central Europe, most of whose territory is currently located in the modern-day Czech Republic. The King was Elector of Holy Roman Empire until its dissolution in 1806, whereupon it became part of the Austrian Empire, and...
to settle in the previously Slavic areas for agricultural and urban development in the course of the Ostsiedlung
Ostsiedlung
Ostsiedlung , also called German eastward expansion, was the medieval eastward migration and settlement of Germans from modern day western and central Germany into less-populated regions and countries of eastern Central Europe and Eastern Europe. The affected area roughly stretched from Slovenia...
.

After World War I
World War I
World War I , which was predominantly called the World War or the Great War from its occurrence until 1939, and the First World War or World War I thereafter, was a major war centred in Europe that began on 28 July 1914 and lasted until 11 November 1918...
the name came into use to describe areas of Czechoslovakia
Czechoslovakia
Czechoslovakia or Czecho-Slovakia was a sovereign state in Central Europe which existed from October 1918, when it declared its independence from the Austro-Hungarian Empire, until 1992...
with large German populations. In 1918 the proclaimed rump state of German Austria
German Austria
Republic of German Austria was created following World War I as the initial rump state for areas with a predominantly German-speaking population within what had been the Austro-Hungarian Empire, without the Kingdom of Hungary, which in 1918 had become the Hungarian Democratic Republic.German...
comprised a Provinz Sudetenland in northern Moravia
Moravia
Moravia is a historical region in Central Europe in the east of the Czech Republic, and one of the former Czech lands, together with Bohemia and Silesia. It takes its name from the Morava River which rises in the northwest of the region...
and Czech Silesia
Czech Silesia
Czech Silesia is an unofficial name of one of the three Czech lands and a section of the Silesian historical region. It is located in the north-east of the Czech Republic, predominantly in the Moravian-Silesian Region, with a section in the northern Olomouc Region...
around the city of Opava
Opava
Opava is a city in the northern Czech Republic on the river Opava, located to the north-west of Ostrava. The historical capital of Czech Silesia, Opava is now in the Moravian-Silesian Region and has a population of 59,843 as of January 1, 2005....
. The term Sudetenland
Sudetenland
Sudetenland is the German name used in English in the first half of the 20th century for the northern, southwest and western regions of Czechoslovakia inhabited mostly by ethnic Germans, specifically the border areas of Bohemia, Moravia, and those parts of Silesia being within Czechoslovakia.The...
was used in a wider sense when on 1 October 1933 Konrad Henlein
Konrad Henlein
Konrad Ernst Eduard Henlein was a leading pro-Nazi ethnic German politician in Czechoslovakia and leader of Sudeten German separatists...
founded the Sudeten German Party and in Nazi German
Nazi Germany
Nazi Germany , also known as the Third Reich , but officially called German Reich from 1933 to 1943 and Greater German Reich from 26 June 1943 onward, is the name commonly used to refer to the state of Germany from 1933 to 1945, when it was a totalitarian dictatorship ruled by...
parlance Sudetendeutsche (Sudeten Germans
Sudeten Germans
- Importance of Sudeten Germans :Czechoslovakia was inhabited by over 3 million ethnic Germans, comprising about 23 percent of the population of the republic and about 29.5% of Bohemia and Moravia....
) referred to all indigenous ethnic Germans in Czechoslovakia. They were heavily clustered, not only in the former Moravian Provinz Sudetenland but also along the northwestern Bohemian borderlands with German Lower Silesia
Lower Silesia
Lower Silesia ; is the northwestern part of the historical and geographical region of Silesia; Upper Silesia is to the southeast.Throughout its history Lower Silesia has been under the control of the medieval Kingdom of Poland, the Kingdom of Bohemia and the Austrian Habsburg Monarchy from 1526...
, Saxony
Saxony
The Free State of Saxony is a landlocked state of Germany, contingent with Brandenburg, Saxony Anhalt, Thuringia, Bavaria, the Czech Republic and Poland. It is the tenth-largest German state in area, with of Germany's sixteen states....
and Bavaria
Bavaria
Bavaria, formally the Free State of Bavaria is a state of Germany, located in the southeast of Germany. With an area of , it is the largest state by area, forming almost 20% of the total land area of Germany...
, in an area formerly called German Bohemia
German Bohemia
German Bohemia was a region in Czech Republic established, for a short period of time, after World War I. It included parts of northern and western Bohemia once largely populated by ethnic Germans...
. In total the German minority population of pre-WWII Czechoslovakia numbered around 20% of the total national population.

Adolf Hitler
Adolf Hitler
Adolf Hitler was an Austrian-born German politician and the leader of the National Socialist German Workers Party , commonly referred to as the Nazi Party). He was Chancellor of Germany from 1933 to 1945, and head of state from 1934 to 1945...
redefined the term to mean the entire mountainous periphery of Czechoslovakia
Czechoslovakia
Czechoslovakia or Czecho-Slovakia was a sovereign state in Central Europe which existed from October 1918, when it declared its independence from the Austro-Hungarian Empire, until 1992...
, and under that pretext, got his future enemies to concede the Czech defensive border in the 1938 Munich Agreement
Munich Agreement
The Munich Pact was an agreement permitting the Nazi German annexation of Czechoslovakia's Sudetenland. The Sudetenland were areas along Czech borders, mainly inhabited by ethnic Germans. The agreement was negotiated at a conference held in Munich, Germany, among the major powers of Europe without...
, leaving the remainder of Czechoslovakia shorn of its border fortifications and buffer zone, occupied by Germany in March 1939. After being annexed by Nazi Germany, much of the region was redesignated as the Reichsgau
Reichsgau
A Reichsgau was an administrative subdivision created in a number of the areas annexed to Nazi Germany between 1938 and 1945...
of "Sudetenland". A considerable proportion of Czechoslovak/Czech and Polish populace thereafter strongly resisted use of the term Sudetes as it harks painfully to Nazi-German times. In the Czech Republic or Poland the designation is seldom used officially, as in maps etc. usually only in discrete Czech and Polish local names for the individual mountain ranges e.g. Karkonosze/Krkonoše appear, see Subdivisions above.

After World War II
World War II
World War II, or the Second World War , was a global conflict lasting from 1939 to 1945, involving most of the world's nations—including all of the great powers—eventually forming two opposing military alliances: the Allies and the Axis...
, most of the German population within the Polish and Czechoslovak Sudetes was forcibly expelled
Expulsion of Germans after World War II
The later stages of World War II, and the period after the end of that war, saw the forced migration of millions of German nationals and ethnic Germans from various European states and territories, mostly into the areas which would become post-war Germany and post-war Austria...
on the basis of the Potsdam Agreement
Potsdam Agreement
The Potsdam Agreement was the Allied plan of tripartite military occupation and reconstruction of Germany—referring to the German Reich with its pre-war 1937 borders including the former eastern territories—and the entire European Theatre of War territory...
and the Beneš decrees
Beneš decrees
Decrees of the President of the Republic , more commonly known as the Beneš decrees, were a series of laws that were drafted by the Czechoslovak Government-in-Exile in the absence of the Czechoslovak parliament during the German occupation of Czechoslovakia in World War II and issued by President...
.

Notable towns in this area include: